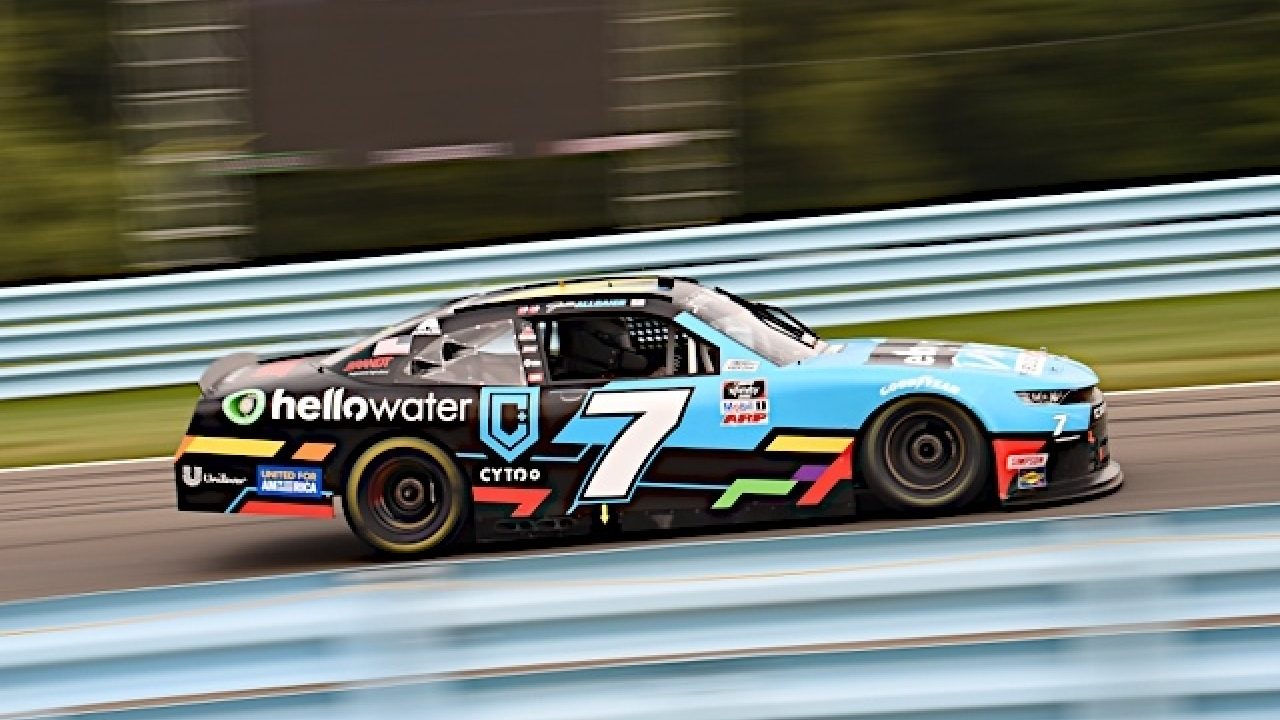 Justin Allgaier, driver of the No. 7 hellowater Chevrolet, secured his ninth top-five finish of the season on Saturday afternoon, overcoming an issue with the right-front tire with less than 20 laps to go to charge through the field and come home with a hard-fought fourth-place finish in the NASCAR Xfinity Series event at Watkins Glen International. With the result, Allgaier has now finished inside the top five in five of the last seven races and remains solidly in third on the NXS playoff grid and fourth overall in the point standings with just six races remaining in the regular season.

With NASCAR once again using a mathematical formula to set the starting lineup, Allgaier was awarded the pole position for the start of the 82-lap event. From the drop of the green flag, Allgaier battled with Austin Cindric for the top spot, before ultimately settling into the runner-up position. Although no longer out front, the driver of the hellowater Chevrolet held steady inside the top three until the scheduled competition caution was displayed on lap 10. Lining up in third for the lap-12 restart, Allgaier continued to fight for track position throughout the green-flag run that followed. Then, with just four laps remaining in the opening stage, crew chief Jason Burdett opted to play with some strategy and called Allgaier to pit road under green for four fresh tires and fuel. With the majority of the field choosing to remain on-track until the conclusion of the stage, Allgaier returned to the track to take the green-and-white checkered on lap-20 in the 27th position.

By virtue of pitting just prior to the conclusion of Stage One, Burdett made the call to keep the driver of the hellowater Chevrolet on the track during the stage-ending caution while the vast majority of the race leaders came to pit road. As a result, Allgaier lined up for the start of Stage Two on lap 24 from the sixth position. Once back under way, Allgaier marched forward, needing just one lap to rejoin the top five before making his way up to third on lap 27. The Illinois native remained in third through a lap-33 caution period, but fell to fourth on the lap-36 restart that followed. Although outside of the top three, the driver of the hellowater Chevrolet remained inside the top five for the final three laps of Stage Two to take the green-and-white checkered flag on lap-40 in the fourth position and earn seven valuable stage points.

Prior to the start of the third and final stage, Burdett called Allgaier back to pit road for four tires and an air-pressure adjustment after the JR Motorsports driver reported that he needed help through Turns 1 and 7 on the historic road course in upstate New York. Due to varying strategies among the race leaders, Allgaier returned to the track for the lap-43 restart in the 18th position. Despite restarting outside of the top 15, Allgaier pressed forward, improving nine positions over the four laps that followed to race into the ninth position before the field was slowed once again by the caution flag on lap 48. This caution allowed Burdett to again work with some strategy, as he called the driver of the hellowater Chevrolet back to pit road for a fuel-only stop, which gained Allgaier an additional three positions to sixth just prior to the lap-50 restart. On the ensuing restart, Allgaier wasted little time rejoining the top five and maintained his track position until reporting to Burdett that he felt like the right-front tire was coming apart. With the condition worsening, Burdett called Allgaier to pit road under green on lap 64 for four tires and fuel. Remaining on the lead lap as he returned to the track, Allgaier was able to close back up to the main pack as the caution flag was displayed just two laps after the stop.

This caution proved to be fortuitous, as the majority of the front runners opted to come to pit road while Allgaier remained on the track. This allowed the driver of the hellowater Chevrolet to catapult up the leaderboard and into the seventh position for the lap-70 restart. Now back inside the top 10, Allgaier set his sights forward, navigating through the distinct corners of Watkins Glen and racing back up to the fourth position before the final caution flag of the afternoon was displayed on lap 76.

Lining up in fourth for the lap-78 restart, Allgaier again dueled with Cindric over the final laps, doing all he could in an effort to rejoin the top three before ultimately taking the checkered flag in the fourth position.

With the result, Allgaier has now scored a top-five finish in five of the last seven NXS races dating back to Texas Motor Speedway in June.

“We had a really fast hellowater Chevrolet today and I’m really happy to come away with another solid finish for everyone on this No. 7 team, especially after overcoming some adversity there during the final stage. We’ve had a lot of great runs throughout this summer and I just can’t thank Jason (Burdett) and all the guys enough for all of their hard work. Hopefully we can keep this momentum going next weekend and have another great day in Indy.”