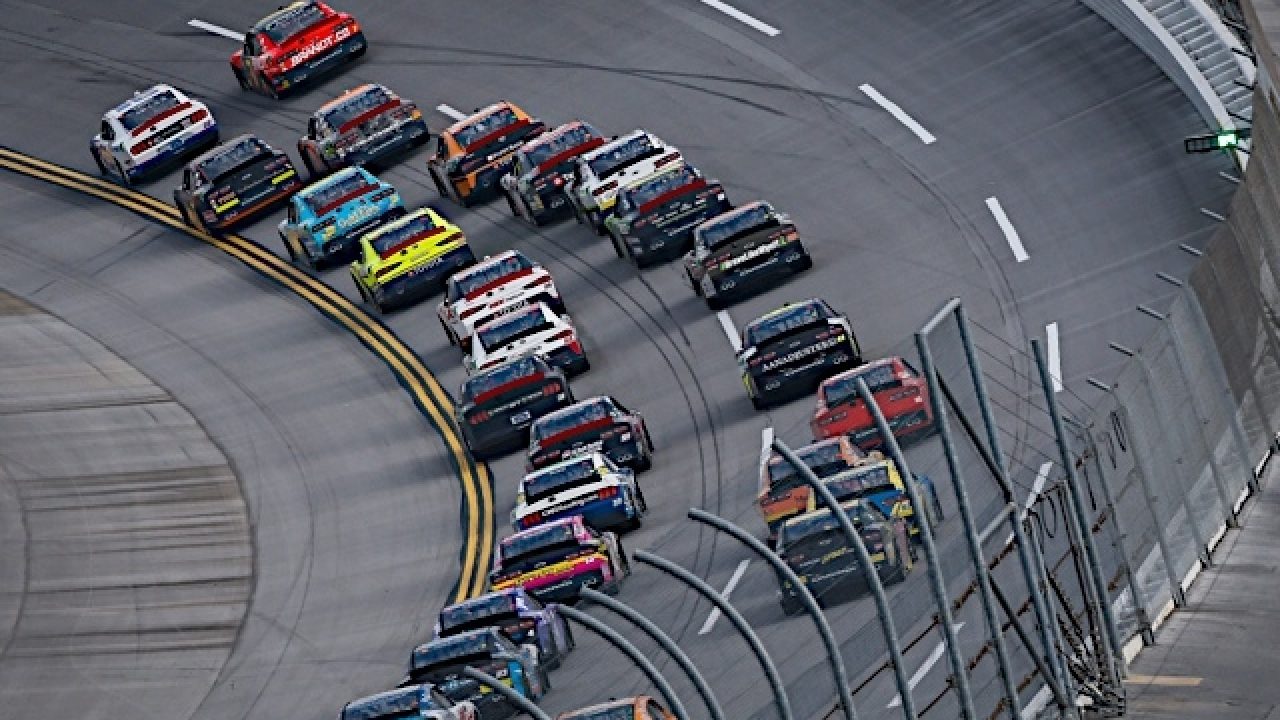 Justin Allgaier, driver of the No. 7 BRANDT Professional Agriculture Chevrolet, was battling three-wide for the race lead in the closing laps of Saturday afternoon’s NASCAR Xfinity Series event at Talladega Superspeedway when a late-race caution on lap 101 slowed the field with Allgaier scored in third. With impending darkness looming over the 2.66-mile tri-oval, NASCAR made the decision to deem the race official just six laps shy of the scheduled distance. As a result, Allgaier took the checkered flag in the third position and recorded his 11th top-three finish of the 2021 season. Additionally, today’s podium extends the JR Motorsports driver’s point cushion to 55 points above the playoff cutline with one race remaining in the Round of 12.

By virtue of NASCAR’s mathematical formula, Allgaier took the green flag for the scheduled 113-lap event from the pole position. Starting out front, the driver of the BRANDT Professional Agriculture Chevrolet drafted well with JRM teammates Josh Berry and Noah Gragson as the trio battled for position inside the top five through the opening 10 laps. Then, while looking to mount another charge toward the front, Allgaier was forced into a three-wide situation that shuffled the JRM driver back to the 12th position by the completion of lap 13. Undeterred by the loss of track position, Allgaier quickly surged forward, utilizing the inside line to re-emerge inside the top 10 and make his way up to the seventh position before the first caution flag of the day was displayed with one lap remaining in Stage One on lap 24. Taking the green-and-white checkered flag under caution on lap 25 in seventh, Allgaier was able to kick off the afternoon with four valuable stage points.

While under the stage-ending caution, crew chief Jason Burdett called the driver of the BRANDT Professional Agriculture Chevrolet to pit road for four tires and a chassis adjustment, sending Allgaier back out for the beginning of Stage Two in the 11th position on lap 30. Once back under way, Allgaier looked to again utilize the inside line to his advantage, but found his forward progress halted at every turn as the field began to form a single-file procession around the outside line of Talladega’s high banks. Using a never-give up attitude, Allgaier continued to work the inside line, mounting a charge back toward the front with 10 laps remaining in the stage and improving 10 positions to draft up to eighth by lap 46. The Illinois native continued his ascent from there, improving an additional three positions over the final four laps to take the green-and-white checkered flag in fifth on lap 50 and earn an additional six stage points on the day.

Prior to the start of the final stage of the afternoon, Burdett called Allgaier to pit road for right-side tires and fuel, sending the No. 7 back out in the third position following a strong stop by the BRANDT Professional Agriculture pit crew. Restarting in third on lap 54, Allgaier wasted little time making his way to the front, taking the race lead from Austin Cindric on lap 55. From there, the duo swapped the top spot for the three laps that followed before Allgaier took sole possession of the lead on lap 58. Allgaier remained out front for the six laps that followed before a strong run by the outside line slid the JRM driver back into the pack.

Despite falling out of the race lead, Allgaier continued to fight for position inside the top five until the lone round of green-flag pit stops got underway on lap 67. Coming to pit road for fuel only, Allgaier returned to the track with JRM teammates Gragson and Berry as the trio hoped they could gain track position on the rest of the lead pack. However, a caution on lap 73 thwarted this plan as the pit cycle had yet to be completed. While under caution, Burdett made the call to keep the driver of the BRANDT Professional Agriculture Chevrolet on the track, moving Allgaier up to the fourth position as the cars that had stayed out prior to the caution came to pit road.

Restarting on the outside line, Allgaier looked to climb forward, battling three-wide for position before narrowly avoiding a multi-car incident heading into Turn 3 on lap 88. The quick evasive maneuver toward the bottom of the track allowed Allgaier to make his way back into the top three as the field prepared for the lap-93 restart. Lining up in third, Allgaier quickly drafted back into second and worked all three lanes of traffic trying to find a way back out front. Battling three-wide for the race lead, Allgaier entered Turn 3 on lap 101 with the momentum to potentially leap into the top spot, but a caution for a multi-car incident brought an abrupt halt to the JRM driver’s forward progress.

Scored in third during the caution, Allgaier hoped for another chance when the race went back to green. However, that green never came, as due to the impending darkness, NASCAR deemed the race official on lap 107.

The third-place result marks the 11th time in 2021 that Allgaier has finished inside of the top three and moves the JRM driver to 55 points ahead of the playoff cutline with just one race remaining in the round of 12. Allgaier only needs a finish of 29th or better at the Charlotte Roval to advance into the Round of 8.

“We had a really fast BRANDT Professional Agriculture Chevrolet today and I can’t thank Jason (Burdett, crew chief) and all the guys on this JR Motorsports team enough. I wish we could’ve ran the last handful of laps, but it’s great to come away with a really solid points day that puts us in a great position heading into next weekend at the Roval. Hopefully we can go there and have some fun and move on to the Round of 8 comfortably.”