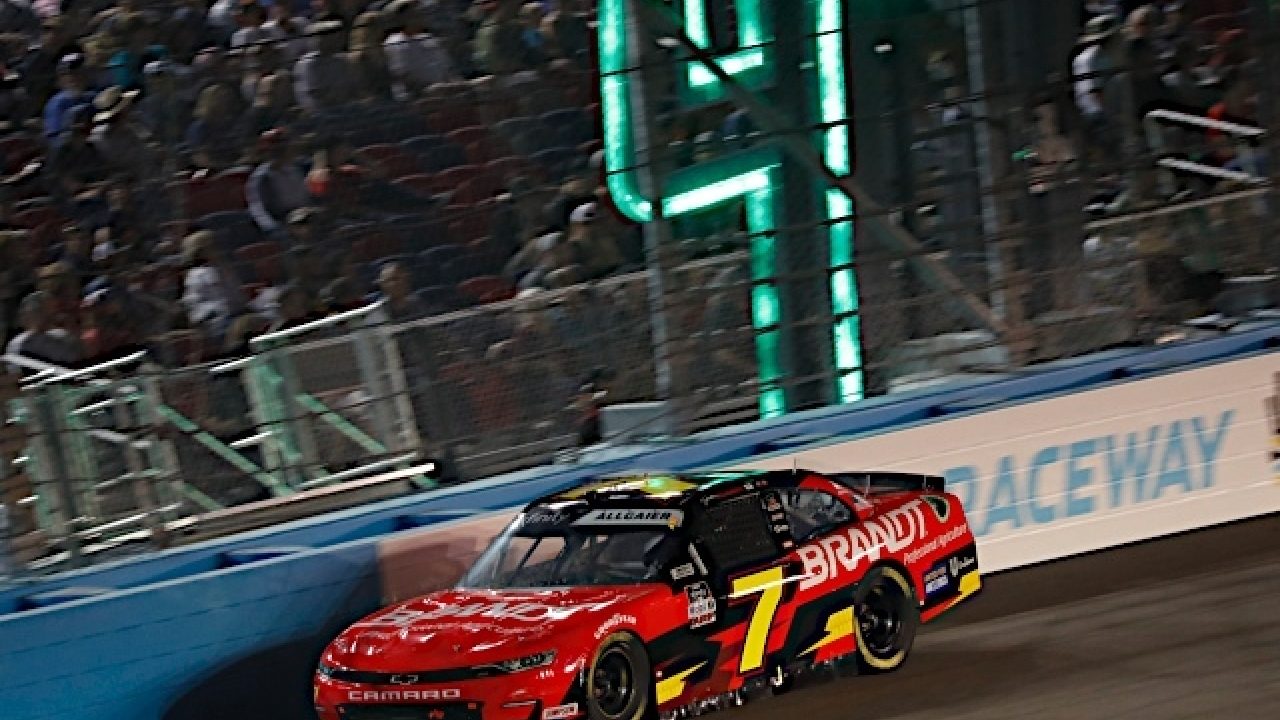 Justin Allgaier, driver of the No. 7 BRANDT Professional Agriculture Chevrolet, rallied from a penalty midway through the final stage of Saturday evening’s NASCAR Xfinity Series season finale at Phoenix Raceway to earn a hard-fought ninth-place finish. With the result, Allgaier has now placed inside the top 10 in 12 consecutive races and in 17 of the last 19 dating back to Texas Motor Speedway in June. Overall, the JR Motorsports driver concludes the 2021 NXS season with two wins, 16 top fives and 24 top 10s.

Allgaier took the green flag for the final event of the season from the third position after a strong qualifying effort on Saturday afternoon. After battling for track position during the opening laps, Allgaier settled in to the fourth position and remained in close contact with the race leaders. As the caution-free opening stage wound down, Allgaier reported to crew chief Jason Burdett that the BRANDT Professional Agriculture Chevrolet was tight while rolling through the center of the corner. Although not handling to his liking, Allgaier held steady inside the top five, taking the green-and-white checkered to end Stage One on lap 45 in the fourth position.

During the stage-ending caution, Burdett called the driver of the BRANDT Professional Agriculture Chevrolet to pit road for four tires and a chassis adjustment in the hopes of improving the tight-handling condition. Returning to the track in sixth, Allgaier wasted little time moving forward, racing up to the third position just before a lap-59 caution period. Taking advantage of the choose rule on the ensuing restart, Allgaier lined up on the inside of the front row. However, the outside line proved to be the stronger of the two, and the JRM driver was quickly shuffled back to fourth. Undeterred by the loss of track position, Allgaier continued to battle inside the top five, ultimately taking the green-and-white checkered on lap 90 in fourth.

While under caution following the stage, Allgaier reported to Burdett that the tight-handling condition persisted through the middle, and that the BRANDT Professional Agriculture Chevrolet was now free both on the entry and the exit of the corner. As a result, Burdett called the Illinois native to pit road for four tires and another round of adjustments, sending Allgaier back out for the start of the third and final stage in the sixth position. In a stage that saw a flurry of cautions during the opening 20 laps, Allgaier moved forward, rejoining the top five on lap 106 and remaining there until the field was slowed once again on lap 124 with the JRM driver scored in fourth. Then, as the field prepared for the lap-134 restart, Allgaier again utilized the choose rule to his advantage, jumping up to the inside of the front row and in position to take the race lead. As the green waved for the restart, Allgaier took off, clearing Austin Cindric to take sole possession of the top spot before the caution flag was again displayed.

During this caution, NASCAR determined that Allgaier had gone below the yellow line prior to crossing the finish line on the previous restart, leading to a restart violation and subsequent penalty for the JRM driver. The penalty, which was to fall to the end of the longest line, shuffled Allgaier from the race lead back to the 31st position for the lap-140 restart.

Undaunted by the task at hand, Allgaier methodically worked his way forward, improving 17 positions over the green flag run that followed to rejoin the top 15 and moved up to 14th before a lap-181 caution period. Burdett opted to work with some strategy during this caution and called the driver of the BRANDT Professional Agriculture Chevrolet to pit road for four tires and fuel, sending Allgaier back out for the sprint to the finish in 13th.

Lining up 13th for the lap-187 restart, Allgaier quickly rejoined the top 10, moving into 10th before the field was again slowed on lap 188. The JRM driver then moved up to ninth on the restart that followed and remained there until a lap-194 caution period set up NASCAR’s version of overtime. Taking the green flag for overtime on lap 202, Allgaier battled three and four wide over the final two laps before crossing the finish line for the final time in ninth.

With the result, Allgaier has recorded a top-10 finish in 12 consecutive events and brings to a close a 2021 season that saw the JRM driver earn two wins, 16 top fives and 24 top-10s overall.

“It’s unfortunate that we got called for a penalty right after the restart where we got out front with our BRANDT Professional Agriculture Chevrolet. But this team did what it did all season long, and that is battle back and not give up. I’m happy that we were able to get back into the top 10 and end this season on a strong note. I can’t thank Jason (Burdett, crew chief), everyone on this No. 7 team and all of JR Motorsports enough for all of their hard work. I am really proud of everything we accomplished this year.”