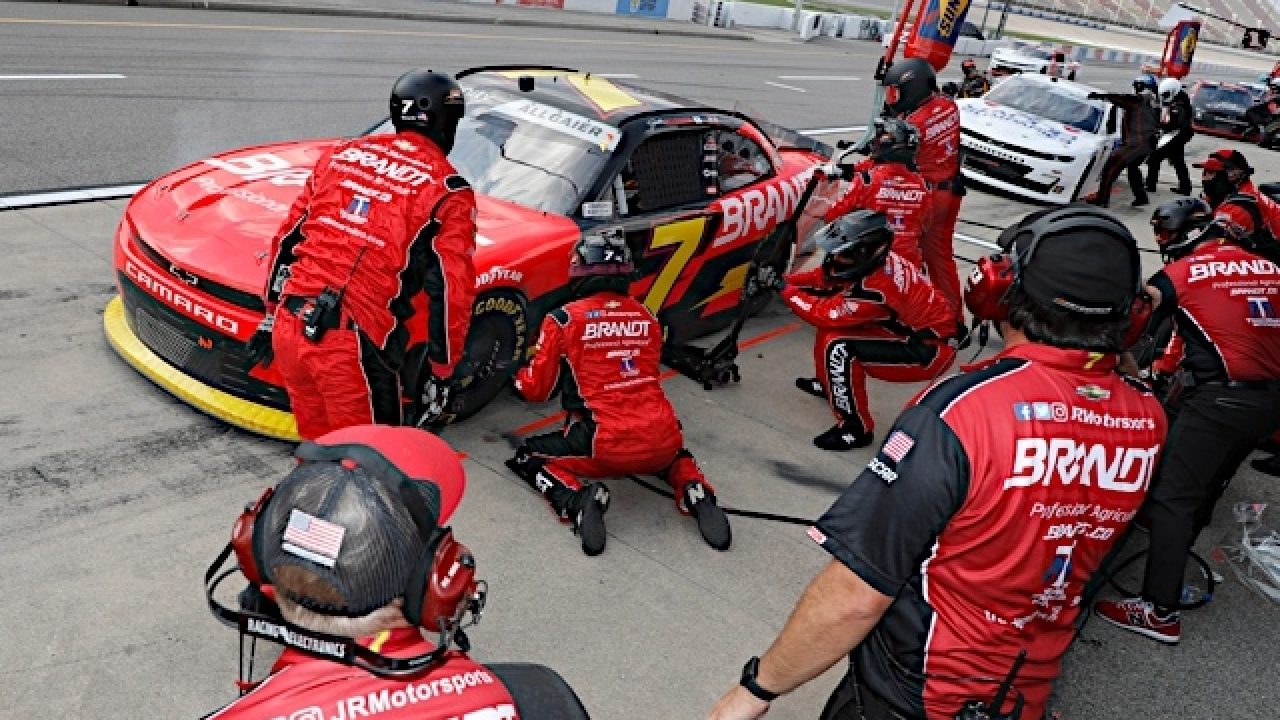 Heading into the closing laps of Saturday afternoon’s NASCAR Xfinity Series event at Michigan International Speedway, Justin Allgaier was in prime position to battle for the victory, trading the race lead with JR Motorsports teammate Josh Berry. However, a flurry of late-race cautions wreaked havoc on the leaderboard, with Allgaier being shuffled back to as far as 10th at one point before the caution flag was displayed for the final time on lap 132. On the ensuing restart, the driver of the BRANDT Professional Agriculture Chevrolet marched forward over the final two laps, improving four positions to take the checkered flag in sixth. With the result, Allgaier has now placed inside the top 10 in seven of the last nine NXS events and moves up to third in the championship standings with four races remaining in the regular season.

Allgaier lined up for the 125-lap event from the fifth position after the field was set via NASCAR’s mathematical formula earlier in the week. Over the opening laps, Allgaier reported that the BRANDT Professional Agriculture Chevrolet was loose both on the entry and the exit of the corner. Despite not handling to his liking, Allgaier maintained his position inside the top 10 through the lap-15 competition caution. Lining up fifth for the lap-20 restart, Allgaier looked to move forward, but a quick caution allowed crew chief Jason Burdett to instead work with some strategy. With just a few laps remaining in the stage, Burdett called Allgaier to pit road for four tires and an air-pressure adjustment, with the plan being to keep the BRANDT Professional Agriculture Chevrolet on the track at the stage-end. Returning to the track in 35th following the stop, Allgaier methodically moved forward over the final four laps of Stage One to take the green-and-white checkered flag on lap 30 in the 21st position.

With the majority of the field opting to come to pit road following Stage One, Burdett’s plan to pit early proved beneficial, as Allgaier remained on track and advanced up to the sixth position for the start of Stage Two on lap 35. Although a caution for a multi-car incident immediately following the restart briefly halted Allgaier’s progress, the JRM driver pressed forward, racing back into the top five and up to the third position once the race got back under way on lap 45. Allgaier maintained his top-five track position throughout the remaining 15 laps of the stage and battled with cousins Harrison and Jeb Burton before ultimately taking the green-and-white checkered flag to end Stage Two on lap 60 in the fourth position and earn seven valuable stage points on the day.

Prior to the start of the third and final stage, Burdett called the driver of the BRANDT Professional Agriculture Chevrolet back to pit road for four tires and another round of adjustments in the hopes of improving the loose-handling condition that had returned in the closing laps of Stage Two. Taking the green from sixth on lap 66, Allgaier powered toward the front, utilizing a three-wide move in Turns 1 and 2 to vault up to the second position. The Illinois native’s ascent didn’t stop there, as Allgaier moved into the race lead for the first time on lap 87. However, Allgaier’s stay at the top spot was short lived, as a hard-fought three-car battle for the race lead ensued with Allgaier ultimately settling into the second position behind JRM teammate Berry.

The driver of the BRANDT Professional Agriculture Chevrolet remained in lockstep formation with teammate Berry at the front until the window opened for the lone round of green-flag pit stops. Coming to pit road from second on lap 110, Burdett decided to play with some strategy again and made the call for fuel-only during the stop. This call proved vital, as it cycled Allgaier into the race lead ahead of Berry with just 12 laps remaining. However, an untimely caution just two laps later on lap 115 brought an end to the strategy. With one set of fresh tires left and only a handful of cars remaining on the lead lap, Burdett called Allgaier back to pit road with the hopes that having fresh tires would help the JRM driver race back to the front.

Lining up third for the lap-121 restart, Allgaier got loose as the field entered Turn 1, shuffling the BRANDT Professional Agriculture Chevrolet back to the eighth position before the field was again slowed by the caution flag. With the outside line proving to being the dominant line throughout the day, Allgaier chose to line up as the fifth car on the outside for NASCAR’s first overtime attempt, but another quick caution prevented Allgaier from making any forward progress. It was the same song, second verse for Allgaier during the second attempt at overtime, as another caution prior to the white flag halted Allgaier’s forward progress.

Taking the green for the final restart of the afternoon on lap 137, Allgaier battled hard, racing two and three-wide for position before taking the checkered flag in sixth to secure his 13th top-10 finish of the season.

The top-10 result also moves Allgaier up to third in the NXS championship standings and keeps him third in the playoff grid with four races remaining in the regular season.

“We had a fast BRANDT Professional Agriculture Chevrolet today and I can’t thank all the guys on this No. 7 team enough. Jason (Burdett, crew chief) made a great strategy call there at the end that got us out into the race lead and it’s just unfortunate that the caution had to come out. But we were able to battle back and come away with another solid finish overall and move up to third in the points. It feels good to keep putting together these types of runs and hopefully we can continue to execute and keep this going as the playoffs get closer.”