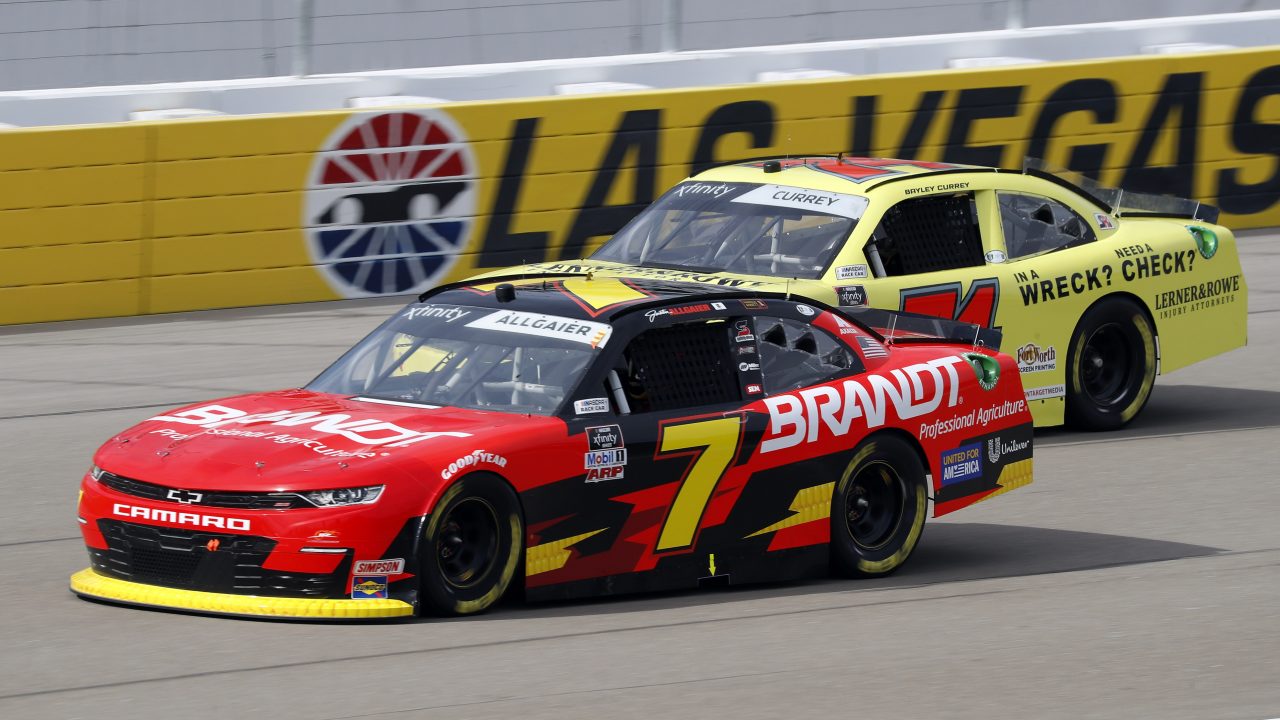 Justin Allgaier, driver of the No. 7 BRANDT Professional Agriculture Camaro, earned valuable points in the first two stages and led laps before ultimately battling through a tough-handling condition late in the race, resulting in a 14th-place finish in Saturday’s NASCAR Xfinity Series race at Las Vegas Motor Speedway.

Rolling off the grid from the 37th position, Allgaier steadily worked his way through the field once the green flag dropped. By lap 15 he had entered the top 20 and reported to the crew just two laps later under a caution flag that the BRANDT Camaro was lacking rear security. Restarting 15th on lap 25, he continued his climb forward, racing his way up inside the top 10 and into the seventh spot before the green-and-white checkered flag waved to end Stage One on lap 45.

After Allgaier reported that the BRANDT Chevy got freer as the run went on, the team opted to bring him to pit road during the stage break for four tires, fuel and a trackbar adjustment. Lining up fourth for the start of the second stage on lap 52, he advanced his position to second before a quick caution came out just a few laps later. Under the caution, he reported that he was happy with the adjustments made during the last stop.

Restarting from the second position on lap 62, Allgaier battled for the lead, taking over the top spot before sliding back into second. He continued to race inside the top three throughout the caution-filled remainder of Stage Two, earning a third-place finish when the green-and-white checkered flag was displayed on lap 90.

Allgaier relayed that the BRANDT Chevy cycled tighter during the second stage, so crew chief Jason Burdett called the driver of the No. 7 in for fresh tires, fuel and adjustments. Taking the green flag for the final stage from the fourth spot, he continued to race inside the top 10 after reporting that the BRANDT Camaro was really free to fire off. Allgaier was running in the 10th position during a long green-flag run when Burdett called Allgaier to pit road for four tires, fuel and adjustments. Sending him back out in the 26th spot, Allgaier was back up to the seventh position once pit stops cycled through. He was in that same position when the yellow flag waved on lap 174. Under the caution, the JR Motorsports driver reported that the BRANDT Camaro went back to the tight side, so the team made their final stop of the night for four tires, fuel and a chassis adjustment.

Allgaier restarted inside the t on lap 179 and was up to sixth before another quick caution came out on lap 181. Staying out under the yellow, he lined up in the fifth position and battled hard through a tough-handling condition in the final laps, ultimately coming home in the 14th position.

“We definitely did not get the finish we wanted tonight, but it felt good to battle for the lead and get some good stage points. We’ll continue gaining momentum from here. I’m looking forward to getting to Phoenix. It’s a great track for us and I know we’ll have a fast BRANDT Professional Agriculture Camaro.”