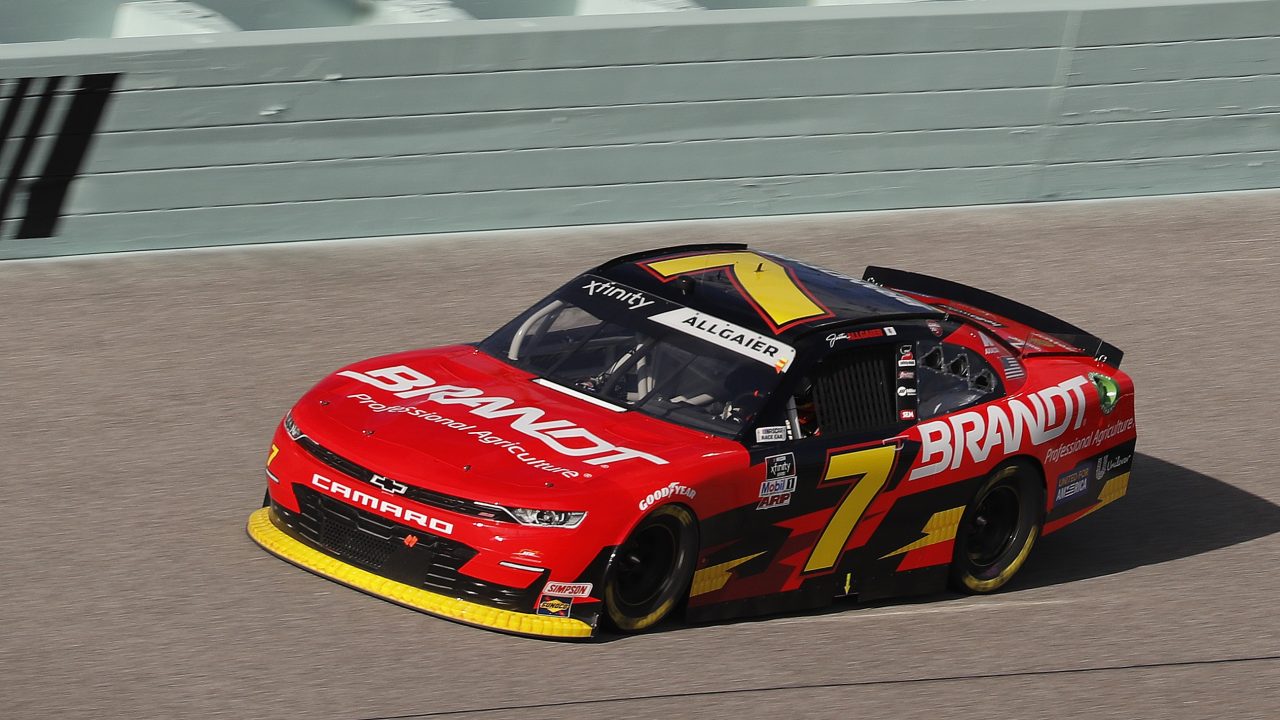 Justin Allgaier was battling for a top-10 position during the final stage of Saturday’s NASCAR Xfinity Series race at Homestead-Miami Speedway when his BRANDT Professional Agriculture Camaro got tight over a seam on the track and slid up into the front of another car, sending Allgaier hard into the outside retaining wall. The No. 7 Chevy sustained heavy damage that was deemed too severe for Allgaier to continue, ending the veteran driver’s day with 98 laps complete. Allgaier was relegated to a 38th-place finish.

Allgaier rolled off the grid in the 19th position and was up to 12th by lap 20. Running in that same spot when the first caution of the race came out on lap 26, he radioed to crew chief Jason Burdett that the BRANDT Camaro was lacking grip and was tight through the center of the turns. Allgaier took the opportunity to come to pit road for four tires and fuel while some opted to stay out.

Restarting back in 23rd on lap 30, Allgaier made the most of his fresh tires, maneuvering his way inside the top 10 within three laps. He continued to steadily pick up positions as the stage went on, taking the green-and-white checkered flag in sixth on lap 40.

During the stage-break, Allgaier came to pit road for four tires, fuel and a wedge adjustment after relaying to the team that the handling was the same on the BRANDT Camaro. He lined up eighth for the start of Stage Two on lap 47 and continued to race inside the top 10. Scored in the eighth position when a caution flag came out on lap 68, Allgaier and the No. 7 team decided to stay out on the track to save their sets of tires. Restarting on old tires from the sixth position, Allgaier fought hard to remain inside the top 10. However, fresher tires prevailed and Allgaier was scored in 15th at the conclusion of Stage Two on lap 80.

The team called Allgaier to pit road for four tires, fuel and adjustments, sending him back out to start the final stage from 15th on lap 87. Methodically, he advanced his position and was closing in on the top 10. While battling for position on lap 97, Allgaier’s BRANDT Camaro got tight over a seam and slid up into the front of the No. 98 of Riley Herbst and hard into the outside retaining wall. Allgaier limped his Chevrolet to pit road, but the damage was too severe to continue and his day was done. Allgaier was ultimately scored with a 38th-place finish.

“This season is just not getting off to a good start for our No. 7 BRANDT Professional Agriculture team. I feel awful for Riley Herbst. I got super tight over the last seam and there was nothing he could have done to avoid me. I hate it for the guys on this team too. They worked hard to prepare this car and we were making some good adjustments to try to get the handling closer to where we needed it to be. I’m ready to get out of Florida and head to Las Vegas and get this bad luck out of the way.”