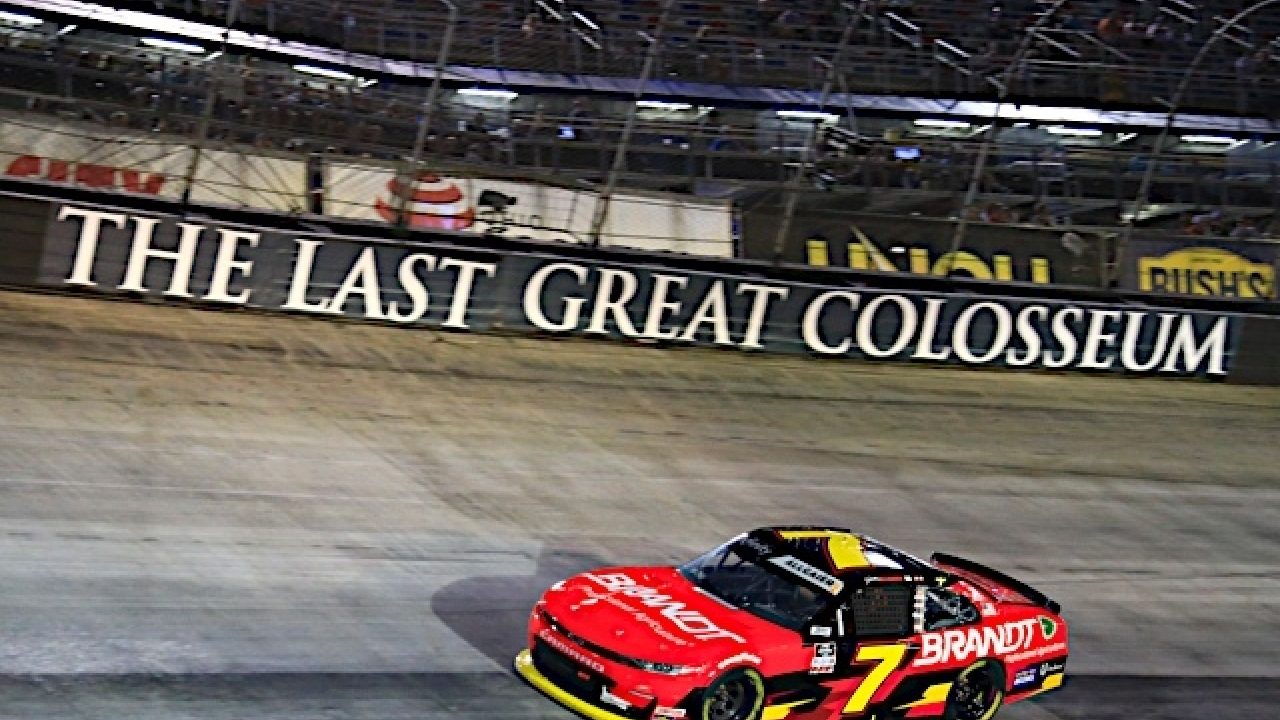 Justin Allgaier, driver of the No. 7 BRANDT Professional Agriculture Chevrolet, earned a hard-fought and resilient fourth-place finish in Friday evening’s NASCAR Xfinity Series regular-season finale at Bristol Motor Speedway. For Allgaier, the result didn’t come easy, as the JR Motorsports driver had to overcome a spin late in Stage Two and a speeding penalty prior to the start of Stage Three to score his 12th top-five finish of the season. Additionally, with Allgaier scoring a stage win in Stage One and earning one additional playoff point, the Illinois native solidified his claim as the third seed for the opening round of the NXS Playoffs, just 24 points behind first.

Lining up on the outside of the front row by virtue of NASCAR’s mathematical formula, Allgaier bided his time in the opening laps of the 300-lap event, settling into the third position before the first caution flag of the night was displayed on lap 9. Opting for the preferred outside line on the lap-16 restart, the driver of the BRANDT Professional Agriculture Chevrolet charged forward, quickly moving back into second before taking the race lead for the first time on lap 36. Allgaier would hold on to the top spot through the scheduled lap-40 competition caution and methodically drove away from the field on the restart that followed, pulling away from second over the green-flag run to close Stage One and taking the green-and-white checkered in first on lap 85. With the stage win, Allgaier earned an extremely valuable playoff point that he can carry throughout the playoffs.

While under the stage-ending caution, Allgaier reported to crew chief Jason Burdett that the BRANDT Professional Agriculture Chevrolet was just a little bit free on entry and a little bit tight through the center of the corner. As a result, Burdett called Allgaier to pit road for four tires and an air-pressure adjustment, sending the JRM driver back out with the race lead for the start of Stage Two on lap 93. Allgaier held steady out front through a lap-102 caution period, but got loose on the ensuing restart and slid back to fourth before the caution flag was again displayed on lap 109. Undaunted by the loss of track position, Allgaier pressed forward once back under way, needing just 20 laps from the lap-116 restart to reclaim the race lead. Once back out front, Allgaier looked poised to score another stage victory, but contact with a lapped car on lap 153 knocked the driver of the BRANDT Professional Agriculture Chevrolet sideways, sending Allgaier into a half-spin that brought the caution flag out once again.

As a result of the slide through the corner, Allgaier was shuffled back to the third position for the nine-lap sprint to end Stage Two, but was able to march back into the top two to take the green-and-white checkered flag in second on lap 170 and earn an additional nine stage points on the evening.

Following the strong recovery to end Stage Two, Allgaier returned to pit road for four fresh tires and a slight air-pressure adjustment, but a penalty for speeding forced the JRM driver to relinquish his top-five track position and take the green flag for the start of the third and final stage from the rear of the field. Despite restarting in the back, Allgaier rapidly ascended up the leaderboard, improving 16 positions over the 58 laps that followed to race up to the sixth position before a lap-237 caution period gave the driver of the BRANDT Professional Agriculture Chevrolet a chance to close back in on the race leaders.

Lining up as the third car on the outside line for the lap-247 restart, Allgaier quickly mounted a charge and worked his way back up to third behind Austin Cindric and JRM teammate Sam Mayer. An intense battle for the race lead would ensue as the trio worked to navigate lapped traffic, with Allgaier settling into third as the long green-flag run progressed. Then, with four laps remaining, Allgaier made his move, driving to the inside of Mayer as they entered Turn 1, but as the pair looked to work through lapped traffic, contact was made, leading to the caution being displayed once again on lap 296.

This caution set up NASCAR’s version of overtime and saw Allgaier line up as the second car on the preferred outside line. As the field exited Turn 2 on the second-to-last lap, the top two made contact and Allgaier dove to the bottom to make it three-wide for the race lead. However, Allgaier’s momentum prevented him from holding onto the lead, allowing eventual race winner AJ Allmendinger to get to his inside.

In a no-holds-barred final lap, Allgaier battled with Riley Herbst door-to-door for position before taking the checkered flag in the fourth position to close out the NXS regular season.

Allgaier enters the 2021 NXS Playoffs as the third seed on the heels of a regular season that saw the JRM driver score two wins, 12 top fives and 17 top 10s.

The opening round of the playoffs kicks off next weekend at Las Vegas Motor Speedway.