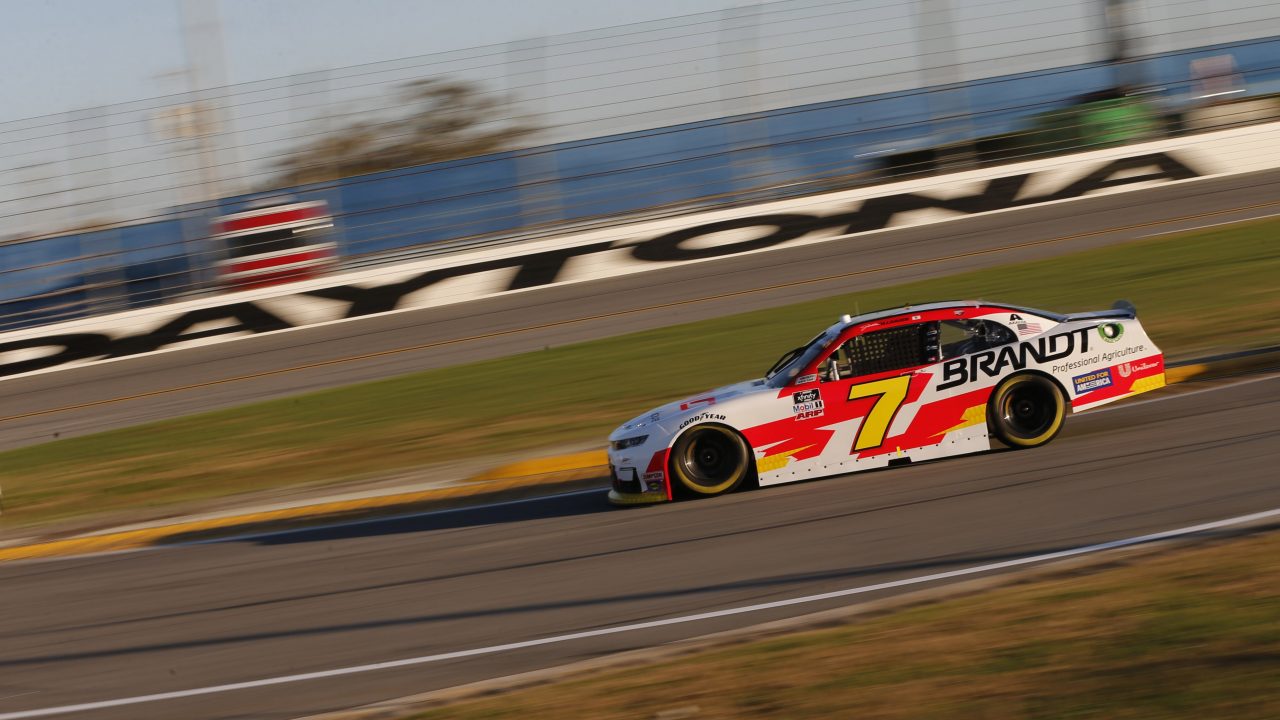 Justin Allgaier, driver of the No. 7 BRANDT Professional Agriculture Chevrolet, was on his way to a solid top-10 finish in Saturday evening’s NASCAR Xfinity Series race on the road course at Daytona International Speedway when his Camaro was turned following a chaotic restart in overtime. The BRANDT Chevy sustained damage, but Allgaier was able to continue on to ultimately finish the race in the 26th position after earning valuable points in Stages One and Two.

Rolling off the grid in the 25th position, Allgaier wasted little time advancing his position once the green flag waved. He was up to 13th when the first caution flag came out on lap 4 and relayed to crew chief Jason Burdett that he needed more forward drive and front turn. Restarting 13th on lap 6, Allgaier continued his climb forward and was about to enter the top 10 when another yellow flag waved on lap 11.

Under the caution, the team called Allgaier in for four tires, fuel and adjustments to improve the BRANDT Chevy’s drive. Lining up 15th for the ensuing restart, Allgaier made the most of the few laps left in the first stage, taking the green-and-white checkered flag in 10th on lap 15.

Staying out during the stage-break, Allgaier took the green flag for the second stage from the second position and continued to battle inside the top five for several laps. As the run went on, Allgaier relayed to the No. 7 team that his BRANDT Chevy was still needing more forward drive and front turn. He dropped back to sixth, but fought through the tough handling condition to advance his position to fifth by the end of Stage Two on lap 30. Under the stage-ending caution, Burdett called Allgaier to pit road for a fresh set of tires, fuel and a trackbar adjustment.

Firing off from the fourth position for the final stage on lap 34, Allgaier lost some spots initially but began working his way back forward. He was up to sixth when the caution flag waved on lap 38 and the team opted to stay out on the track. Restarting from the same spot, Allgaier again lost some ground after a car ahead of him spun his tires. The JR Motorsports driver was running in the seventh position when a caution came out with three laps to go and this time the team decided to come to pit road for the final time of the night for tires and fuel.

Allgaier lined up 15th for the first attempt at NASCAR’s version of overtime and maneuvered his way through a chaotic restart to advance his position to eighth before the caution came out once again prior to the leader taking the white flag. The field lined up one more time for a green-white-checkered finish and this restart proved to be just a hectic as the last. Unfortunately, Allgaier’s Chevrolet did not go unscathed this time as he was turned by another car, triggering a multi-car incident. NASCAR did not throw a caution for the incident, but Allgaier was still able to continue on with his damaged BRANDT Camaro to earn a 26th-place finish.

“I am really bummed with how our race ended tonight. The guys did such a great job preparing this BRANDT Professional Agriculture Chevy and we were putting together a strong run. This race was a special one for BRANDT with having two cars on the track tonight. We wanted to get two strong finishes for them, but it just didn’t work out for our No. 7 team. I’m so pumped for my teammate Miguel (Paludo) though. He did a fantastic job tonight.”