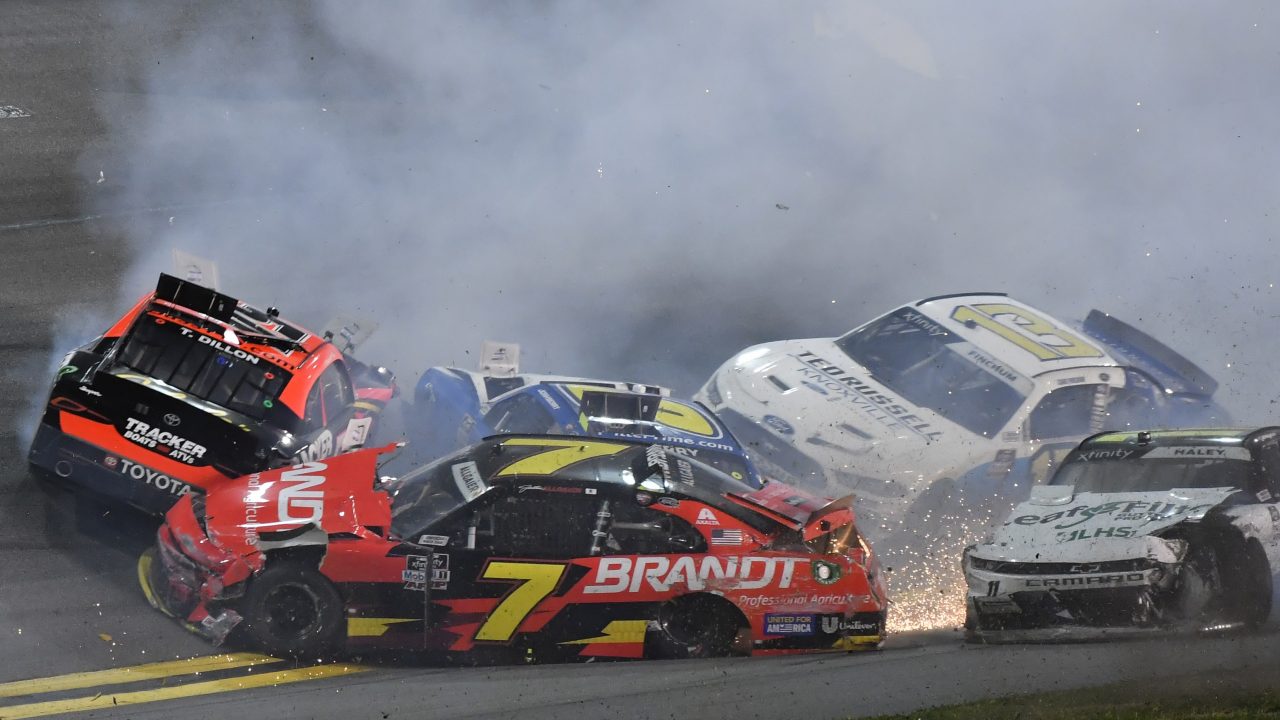 Justin Allgaier, driver of the BRANDT Professional Agriculture Chevrolet, was putting together a strong run in the season-opening NASCAR Xfinity Series event on Saturday at Daytona International Speedway when he was caught up in a multi-car incident with less than 20 laps remaining. The No. 7 Camaro sustained too much damage to continue and Allgaier was scored with a 28th-place finish. The veteran driver will return to Daytona once again next weekend as the series prepares for the first road-course race of the season.

Allgaier rolled off the grid in second after qualifying was rained out and the field was set by the rule book. From the drop of the green flag, the No. 7 Camaro showed speed as Allgaier raced inside the top five and drove to the lead right before the first caution flag of the evening waved on lap 4. Restarting in the top spot, Allgaier continued to battle near the front of the field for the remainder of the caution-filled first stage, ultimately taking the green-and-white checkered flag in the seventh position.

Under the stage-ending caution, crew chief Jason Burdett called Allgaier in for a pit stop of four tires, fuel and a chassis adjustment.

The JR Motorsports driver took the green flag for Stage Two on lap 36 from the 19th position and methodically started working his way forward using the draft. By lap 43, Allgaier was back up to the 10th position as a majority of the field ran single-file. Less than 10 laps later, Allgaier was shuffled back several positions before eventually moving to the bottom to try to get the inside line working. As the laps wound down in the second stage, the pack of cars he was working with began gaining momentum and Allgaier was able to move up to 11th before an eventful end to the stage that subsequently brought out the red flag.

Prior to pitting at the stage break, Allgaier relayed to Burdett that the BRANDT Camaro was a little more aero loose than in the first stage but was still fast. Once the red flag was lifted, the team opted to pit for two tires and fuel.

Firing off for the final stage from fourth on lap 65, Allgaier continued to battle inside the top three until the fuel window opened for teams to come to pit road. Allgaier was preparing to make his scheduled green-flag stop when a multi-car incident brought out the caution on lap 75. The Illinois native was able to avoid the melee and came to pit road under the yellow flag once it opened to pack his Camaro full of fuel.

Allgaier lined up 13th for the lap-83 restart and was back up to seventh when another caution flag waved on lap 100. Choosing to stay out, Allgaier was in the seventh position when the field went back to green with less than 20 laps remaining. Not long after cars were up to speed, chaos broke out ahead of Allgaier and he had nowhere to go. The BRANDT Camaro sustained heavy damage and Allgaier was unable to drive it back to pit road for repairs. He was scored with a 28th-place finish.

“Guys were just being overly aggressive, especially with that many laps to go. We knew business was going to pick up, but it’s a shame. Our BRANDT Professional Agriculture Camaro was pretty good. Our car was one of the stronger ones at the beginning. We’ll regroup and come back next week at the road course and try to put it in Victory Lane, just like we were trying to do today.”