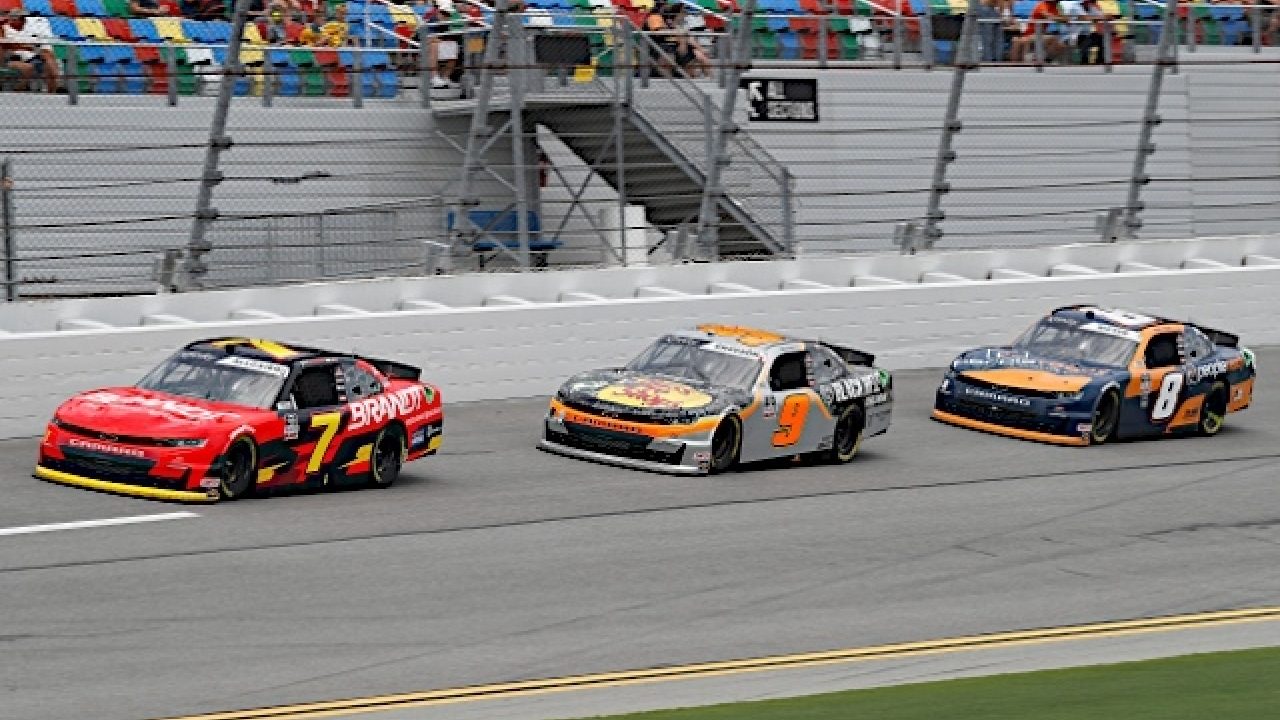 Justin Allgaier, driver of the No. 7 BRANDT Professional Agriculture Chevrolet, charged through the pack on the final lap of Saturday afternoon’s rain-postponed NASCAR Xfinity Series event at Daytona International Speedway, making a daring three-wide move up the middle to come home with a strong third-place finish. The top-three result is the ninth of the season for Allgaier and gives the JR Motorsports driver 10 finishes inside the top five for the sixth consecutive season, dating back to 2016. Additionally, Allgaier remained third in the NXS championships standings, as well as the projected playoff grid, with three races remaining in the regular season.

Allgaier took the green flag for the 100-lap event on Friday evening from the fourth position after the field was once again set via NASCAR’s mathematical formula. Throughout the opening laps, Allgaier drafted inside the top five with JRM teammate Noah Gragson as the duo navigated around the outside of the 2.5-mile superspeedway, working up to as high as the fourth position before the scheduled competition caution was displayed on lap 15. While under caution, crew chief Jason Burdett made the call for the driver of the BRANDT Agriculture Chevrolet to come to pit road for four tires and a round of adjustments. Allgaier lined up 13th following the pit stop, but as the field prepared to come back to the green on lap 20, the skies opened up and heavy rains began to fall. This rain forced NASCAR to throw the red flag and ultimately postpone the remainder of the event until Saturday afternoon.

Under the sunny afternoon skies of Daytona Beach, the race went back to green on lap 21. Now back under way, Allgaier looked to march to the front following the pit stop just prior to the rain delay. With the inside line proving strong early, Allgaier worked his way down to the bottom and drafted back into the top 10 on lap 24. Allgaier’s climb continued from there, as the JRM driver narrowly avoided a multi-car incident in the closing laps of Stage One to take the green-and-white checkered in the fifth position and earn six valuable stage points to begin the day.

During the stage-ending caution, Burdett called the driver of the BRANDT Professional Agriculture Chevrolet back to pit road for a fuel-only stop. With a variety of strategies playing out during this caution, Allgaier returned to the track following the stop in the sixth position for the start of Stage Two on lap-33. A quick caution just after the restart briefly halted Allgaier’s forward progress, but once the green flag went back into the air on lap 38, the Illinois native ascended up the leaderboard. Drafting with JRM teammates Gragson and Sam Mayer, Allgaier reemerged inside of the top three on lap 44 before moving into the second position one lap later. The driver of the BRANDT Professional Agriculture Chevrolet held steady in second until the caution flag was again displayed on lap 48. Burdett took this opportunity to bring Allgaier back to pit road for a pair of right-side tires and enough fuel to make it to the end of the race comfortably.

With several cars opting to remain on-track during this caution, Allgaier lined up for the eight-lap sprint to end Stage Two in 11th. Battling two- and three-wide for position, Allgaier drafted with Gragson and Mayer before taking the green-and-white checkered on lap 60 in the eighth position. The stage-ending result earned Allgaier an additional three stage points and netted the No. 7 team a total of nine valuable points on the afternoon.

Following the stage result, Burdett made the call for Allgaier to stay out following Stage Two, moving the JRM driver up to the third position for the start of the third and final stage on lap 64. Restarting from the inside of the second row, Allgaier found little drafting help as the outside line had proven to be the more dominant line, and was shuffled back to sixth. The driver of the BRANDT Professional Agriculture Chevrolet remained in sixth through a lap-72 caution period before taking advantage of the subsequent restart to move back up to fourth as another quick caution just three laps later slowed the field once again.

Restarting fourth on lap 86, Allgaier quickly used the outside line to his advantage and drafted into second as the field began to get single-file around the top of the high banks of Daytona. Riding in second, Allgaier was biding his time, patiently waiting as the laps clicked off before making his move at the top spot. However, as the field was coming to four laps to go, Allgaier was shuffled into the middle lane as the top five began to jockey for position. Despite being in the middle, Allgaier continued to battle and used the side-drafting technique to his advantage as he continued to fight for position inside the top five as the field took the white flag.

Then, heading down the back straightaway for the final time, Allgaier received a massive push from teammate Gragson that propelled him into the three-car battle for the victory on the exit of Turn 4. Pushing through the middle, Allgaier was able to improve three positions in the dash to the finish line to take the checkered flag in third.

With the result, the driver of the BRANDT Professional Agriculture Chevrolet has now finished inside of the top three on nine different occasions this season.

“What a fast BRANDT Professional Agriculture Chevrolet we had here today. I thought we were sitting in a great position with five laps to go, but unfortunately we got shook out and had to fight our way back. I can’t say enough about everyone on this JR Motorsports team. We never give up and keep fighting and that shows week in and week out. I’m happy we were able to come out of here with another top-three finish and I can’t wait to get back to Darlington next week.”