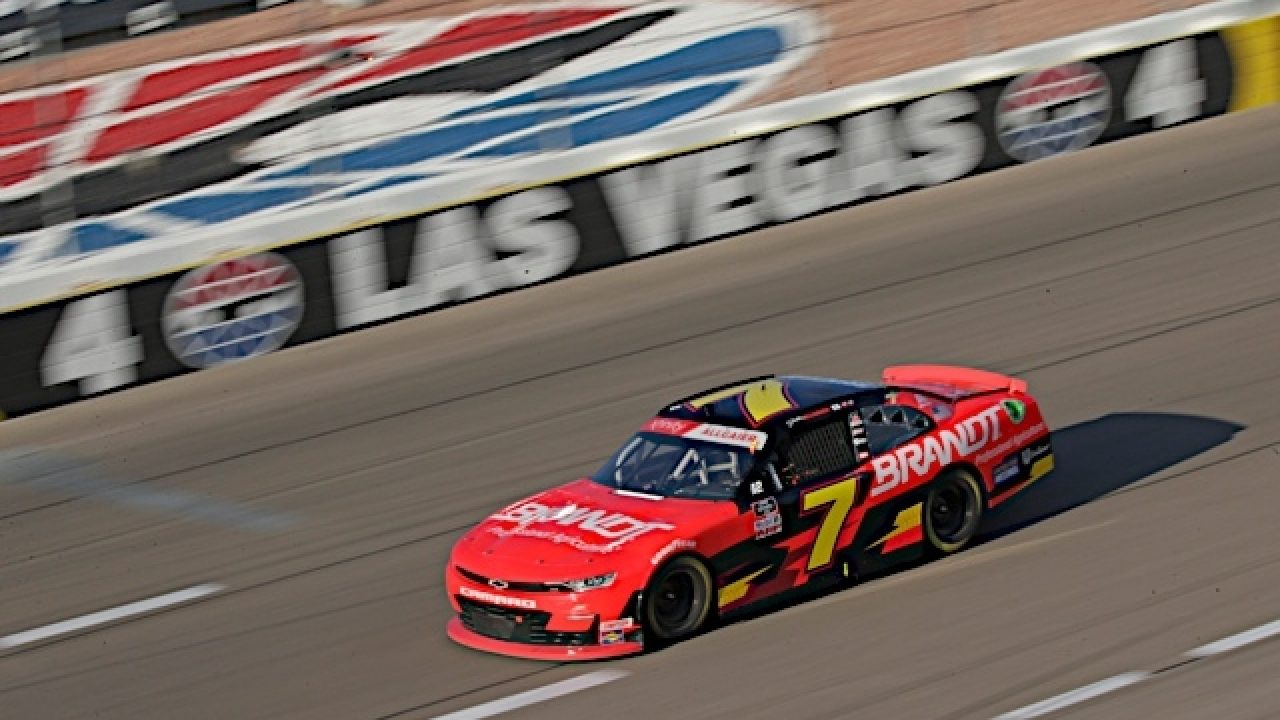 Justin Allgaier, driver of the No. 7 BRANDT Professional Agriculture Chevrolet, battled for the race lead throughout Saturday evening’s NASCAR Xfinity Series event at Las Vegas Motor Speedway, pacing the field for a race-high 90 laps and securing a stage victory following Stage Two before coming home with a second-place finish. The runner-up result moves Allgaier to 28 points ahead of the eighth and final playoff position with two races remaining in the Round of 12. Additionally, today’s finish comes in a clean sweep of the top-three positions for JR Motorsports, with teammate Josh Berry taking the checkered flag and Noah Gragson crossing the finish line in third.

Allgaier lined up for the 201-lap event from the third position after the field was once again set via NASCAR’s mathematical formula earlier in the week. Throughout the opening run of the day, Allgaier maintained his top-five track position, despite reports that fluid may be leaking out of the rear of the BRANDT Professional Agriculture Chevrolet. As a result, crew chief Jason Burdett called Allgaier to pit road during the scheduled competition caution on lap-25 to survey if there was any potential issue. After briefly looking under the car, it was determined that everything looked accordingly in the rear of Allgaier’s Camaro. Returning to the track in 28th following the stop, Allgaier rapidly ascended up the leaderboard, quickly improving 10 positions to 18th while narrowly avoiding a multi-car incident immediately after the restart.

Sitting 18th for the lap-40 restart, Allgaier continued to climb forward over the final five laps of Stage One, improving four positions to take the green-and-white checkered flag in 14th on lap 45.

During the stage-ending caution, Burdett called Allgaier back to pit road for four tires and an air pressure adjustment, with the JRM driver exiting pit road in seventh for the start of Stage Two on lap 51. Once back underway, Allgaier charged forward, racing up to the fourth position before the field was slowed by a lap-53 caution period. Lining up in fourth for the lap-59 restart, Allgaier made his move, quickly racing up to the second position by the completion of lap 60 before ultimately maneuvering his way into the race lead for the first time on lap 65.

Now out front, the driver of the BRANDT Professional Agriculture Chevrolet set sail as Allgaier pulled away from the competition during the green-flag run that followed to ultimately score the victory in Stage Two and earn an extremely valuable playoff point in the process. This additional playoff point will remain with Allgaier throughout the duration of the playoffs.

Prior to the beginning of the third and final stage of the evening, Allgaier returned to pit road for four fresh tires and fuel. Another strong stop by the BRANDT Professional Agriculture pit crew kept the JRM driver in the race lead for the lap-96 restart. Once back under green, Allgaier again looked to drive away from the field, maintaining the top spot until the caution flag was displayed on lap 120. While under caution, Burdett called the Illinois native to pit road for another set of four tires and a chassis adjustment.

Holding serve following the stop, Allgaier swapped the lead back-and-forth with Austin Cindric after the restart before reclaiming sole possession of first on lap 138. The driver of the BRANDT Professional Agriculture Chevrolet maintained control of the race until JRM teammate Berry wrestled the lead away from him on lap 159, just prior to the window opening for the lone round of green-flag pit stops. Holding steady in second, Burdett made the strategy call to bring Allgaier to pit road under green one lap sooner than Berry on lap 177 with the hopes that this move would put the No. 7 team back out front. Hitting pit road for the final set of four tires and a chassis adjustment, Allgaier was able to return to the track ahead of Berry and reassume the race lead once the pit cycle was completed on lap 183.

However, Allgaier’s return to the lead was short-lived, as Berry used the fresher tires to his advantage to slide the JRM driver back to second with just over 15 laps to go. In the closing laps, Allgaier did all he could to try to close back in on the race lead before ultimately taking the checkered flag in the second position.

This evening’s second-place result marks the 10th time in 2021 that Allgaier has placed inside the top three and moves the JRM driver up to 28 points ahead of the eighth and final cutoff position with two races remaining in the Round of 12.

“We had a great BRANDT Professional Agriculture Chevrolet today and I can’t thank Jason (Burdett, crew chief) and everyone on this No. 7 team enough. I wish we could’ve been one spot better today but this is a great way to get these playoffs underway. A huge congratulations to my teammate Josh (Berry) and that entire No. 1 team. This was a big day for our entire JR Motorsports organization as a whole with Noah (Gragson) finishing in third. I’m really proud of everyone both here and back at the shop. Now it’s on to Talladega.”