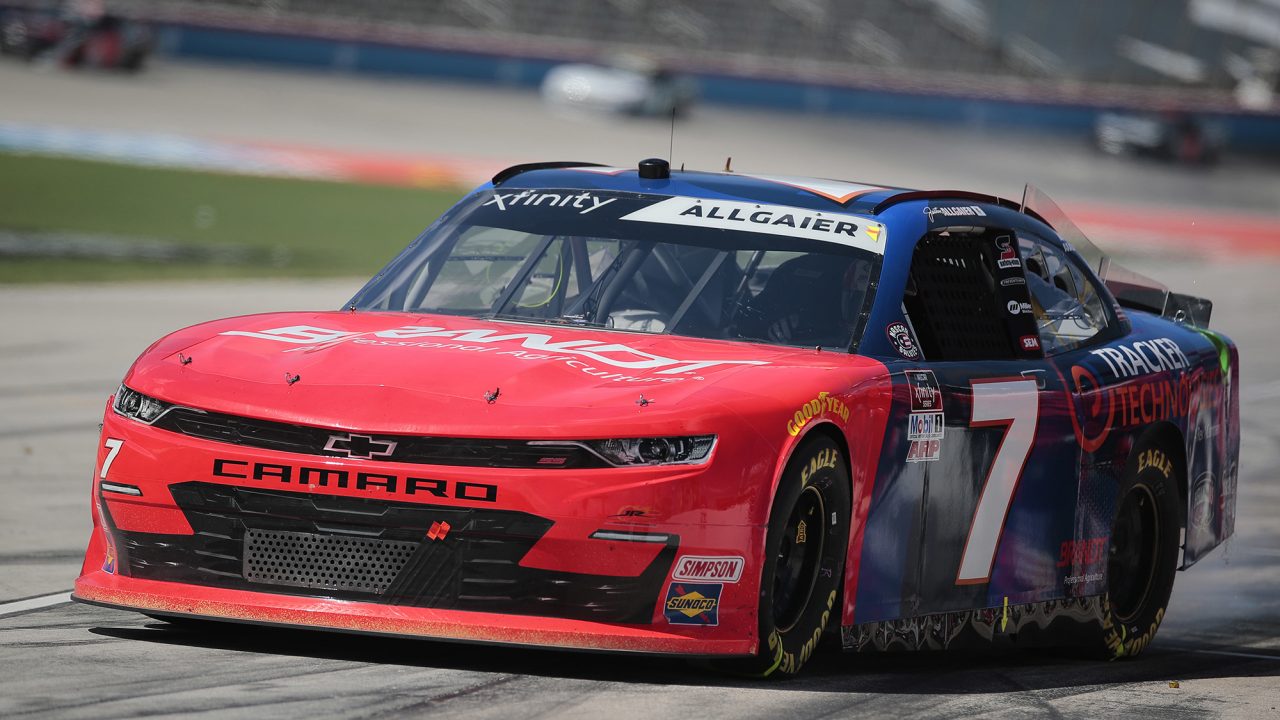 Justin Allgaier, driver of the No. 7 BRANDT/Tracker Technologies Camaro, had a strong day at Texas Motor Speedway, sweeping the first two stages of the NASCAR Xfinity Series race on his way to a third-place finish. Allgaier led a total of 98 laps in the race, a new career best in a single event on a 1.5-mile track. The 34-year-old driver’s fourth top-five finish of the season helped propel him to sixth in the NXS point standings.

By virtue of the random draw, Allgaier lined up fourth for the start of Saturday’s race and was running in the same position when a caution flag waved on lap 3. A bad start ahead of him caused him to lose some positions on the restart, but he worked his way back up to fourth by lap 15 and advanced another spot to third before another yellow flag was displayed on lap 18. Allgaier continued his surge forward once the race resumed and found his way to the lead on lap 35. The JR Motorsports driver continued to pace the field in the closing laps of Stage One, ultimately earning his sixth stage win of the season when he took the green-and-white checkered flag on lap 45.

Under the stage-ending caution, Allgaier reported to crew chief Jason Burdett that the BRANDT/Tracker Technologies Chevy was a little free in and tight through the center of the turns. The team opted to make an air-pressure adjustment to fine-tune the handling on the No. 7 Camaro and they made a fast stop for four tires and fuel.

Allgaier lined up second for the start of Stage Two on lap 52, but wasted listed time retaking command of the lead. Early in the run, he reported that the adjustment made under the pit stop helped his Camaro’s handling. Allgaier was out to a comfortable lead when a caution came out on lap 67. He battled hard on the restart and maintained the lead for the remainder of Stage Two, earning his second stage win of the day. The team called Allgaier in at the conclusion of the stage for four tires, fuel and an air-pressure adjustment.

The JR Motorsports driver took the green flag for the final stage in the fourth position on lap 97, but the loss of track position didn’t deter him as he was able to retake the lead on lap 105. When a caution came out on lap 107, he reported that the entry and exit were freer that run. Staying out, he restarted in the top spot on lap 112 and held the position until Kyle Busch made the pass a few laps later.

Another caution came out on lap 117 and the No. 7 team called for Allgaier to again stay out while the leader opted to head to pit road. Allgaier took over the lead for the restart on lap 123 and held point for several laps before losing the lead just before the start of green-flag pit stops. The Illinois native made his way to pit road for four tires and fuel and after making his way back out on the track, he was informed of a blend line violation. Allgaier was forced to make a pass-through penalty, but was still able to work his way back up to eighth before the last caution of the day came out on lap 195.

The team called Allgaier in for four tires and fuel to prepare for NASCAR’s version of overtime. Allgaier restarted in eighth and powered his way to third before the checkered flag waved. The result was his second consecutive top-five finish.

“The guys did such an awesome job preparing this BRANDT/Tracker Technologies Chevy and did a great job all day long on adjustments and pit stops. I hate that we got that penalty. I really think we could have been able to battle for the win there at the end if we hadn’t. We’ll be ready to battle again next week in Kansas.”