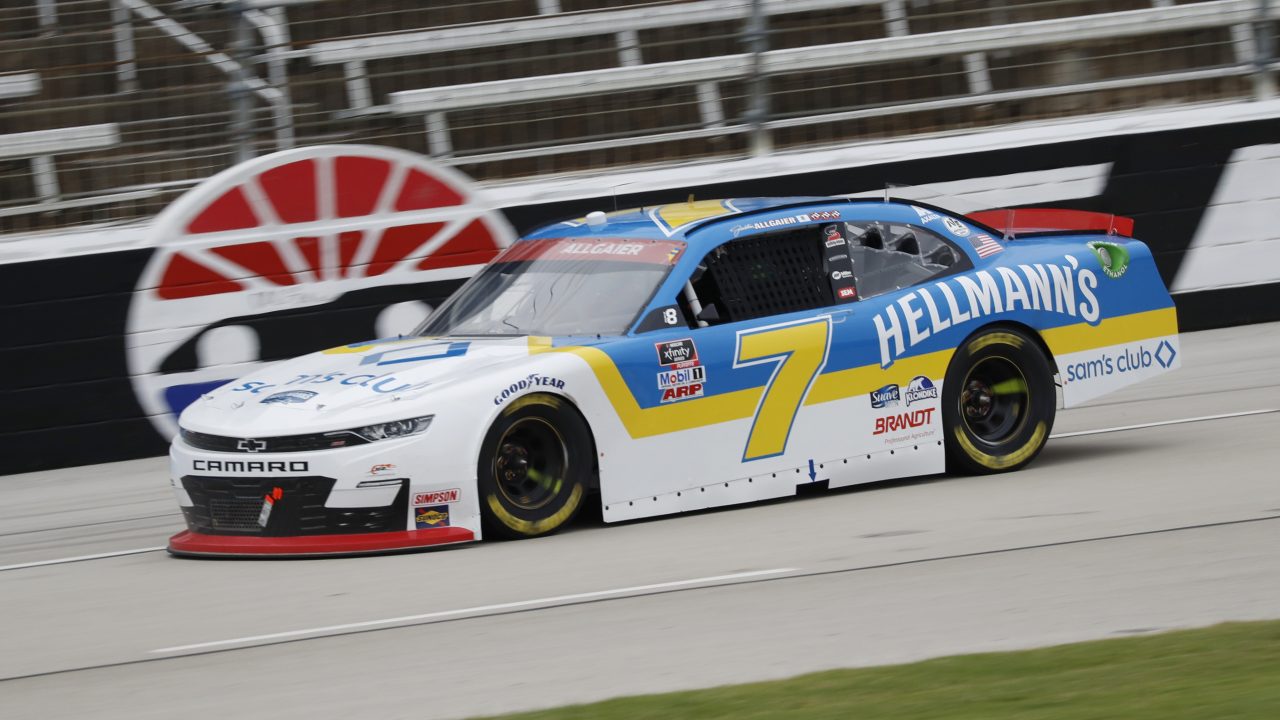 What started out as a solid day for Justin Allgaier and the No. 7 Sam’s Club/Hellmann’s team went downhill after Allgaier was caught up in a late-race incident that ended his day early at Texas Motor Speedway. The Illinois native was relegated to a 26th-place finish after leading 35 laps. Allgaier will head into the final race in the Round of 8 just eight points above the cutoff line for the Championship 4 in the NASCAR Xfinity Series Playoffs.

Allgaier rolled off the starting grid from fifth and steadily improved his position, running in the third spot when the first caution of the race came out on lap 11. He reported to his team that he was happy with the balance on his Sam’s Club/Hellmann’s Camaro. Restarting in the second position after utilizing the choose cone, he tried hard to maintain his position but dropped back to third and was in that same spot when the field was slowed for the lap-20 competition caution.

Opting to stay out under the yellow, he restarted second on lap 25 and after being caught on the outside of a three-wide battle for the lead, lost his momentum but worked his way back up to third before yet another yellow flag came out with five laps remaining in the first stage. He lined up third for a one-lap shootout and picked off one position to end Stage One in second, collecting nine valuable stage points in the process.

During the stage break, the driver of the No. 7 came to pit road for four fresh tires, fuel and an air-pressure adjustment after reporting a vibration late in Stage One. Firing off from the 16th position on lap 51 with some cars being on varying pit strategies, Allgaier made quick work of the field, advancing to fifth within just 10 laps under green. He relayed to his team that the vibration was gone with the fresh set of tires and continued his surge forward, advancing his position to second before the end of the caution-free Stage Two on lap 90.

Allgaier was happy with the balance on his Sam’s Club/Hellmann’s Chevy, so the team opted to take just four tires and fuel during the pit stop under the stage-ending caution. He took the green flag for the final stage on lap 97 from the second position and powered his way to the lead on lap 91. He continued to pace the field until the caution flag waved for an incident on lap 108. Allgaier again took over the top spot after the race was back under way. He reported that the vibration had returned on his No. 7 Camaro, but didn’t let that deter him as continued to hold point.

When a caution came out on lap 132, Allgaier led the field to pit road. The No. 7 team made fast stop for four tires and fuel, but Allgaier would line up in third with cars ahead of him on older tires. The veteran driver got loose on the lap-137 restart and lost some ground to the race leaders, but with a fast Camaro he quickly made up positions and was back up to third before another incident brought out the yellow flag.

After coming to pit road for his last set of fresh tires and fuel, Allgaier restarted from the fifth spot on lap 163. He battled his way to second and was tracking down the leader before an inopportune caution came out on lap 170. Staying out, Allgaier restarted in the second position and got loose while battling for the lead. He lost some ground but was trying to recover when another car made contact with him, triggering a multi-car incident. The Sam’s Club/Hellmann’s Camaro suffered major damage after contact with the wall and Allgaier was forced to retire from the race early after completing 175 laps.

The JR Motorsports driver was ultimately scored with a 26th-place finish, but is still above the cutoff line for the Championship 4 with one race left in the Round of 8.

“First of all, I’m just proud of everyone at JR Motorsports. The Camaro that we brought today, to get Sam’s Club and Hellmann’s that far up front and to be as good as we were, I’m just really proud of the effort. We had a lot of speed. It’s a shame for our team that our day ended early. It’s pretty disappointing. We’ll regroup. Thankfully we were able to get some good stage points today and we’re still in a solid position in the points. Hopefully we can head to Martinsville and have a good weekend.”