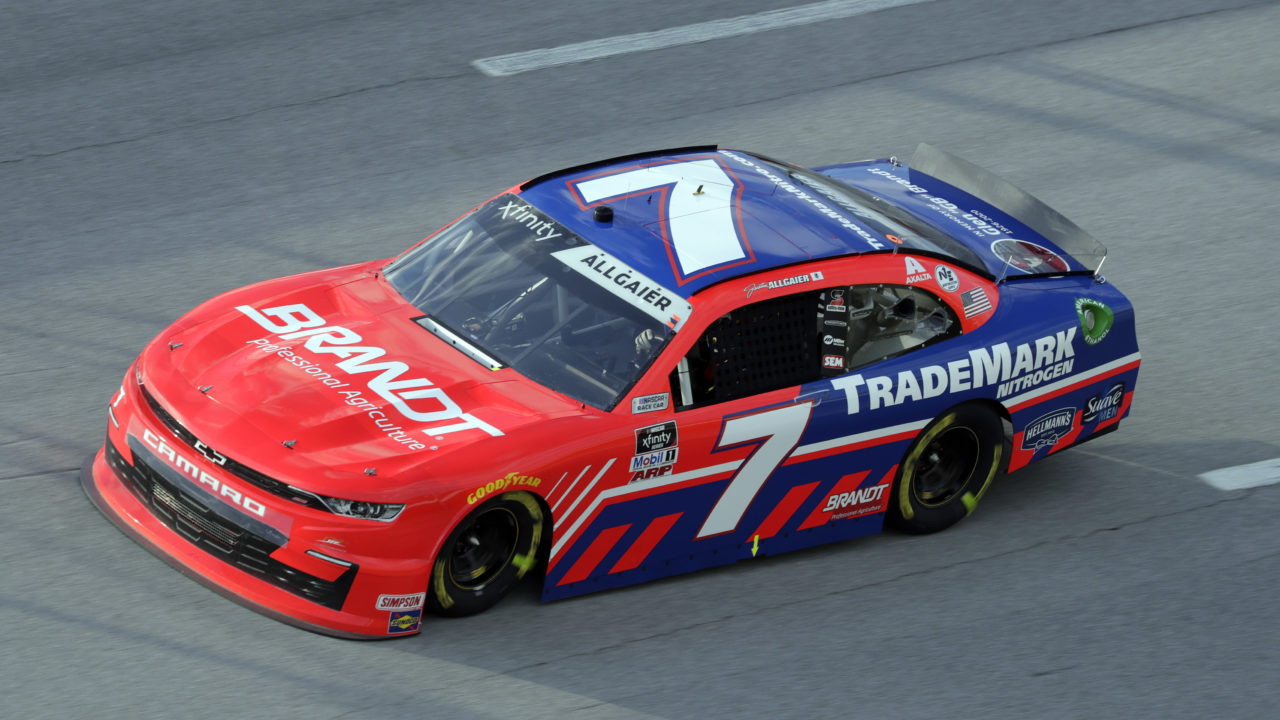 Justin Allgaier, driver of the No. 7 BRANDT / TradeMark Nitrogen Camaro, was running inside the top 10 at Talladega Superspeedway with less than 10 laps to go when he was involved in a multi-car incident in Saturday’s NASCAR Xfinity Series race. The No. 7 Chevy sustained too much damage to be able to continue, relegating Allgaier to a 28th-place finish.

Allgaier rolled off 12th for the 113-lap race and used the draft to advance his position forward. When the competition caution came out on lap 10, the 34-year-old driver reported to the team that he was free into Turn 3. The team opted to come in for four tires, fuel and a wedge adjustment. With many cars staying out, Allgaier restarted 24th and surged forward, at one time racing four-wide in the draft for position. When the green-and-white checkered flag waved to end Stage One, Allgaier was running in the 12th spot.

Staying out under the stage-ending caution, Allgaier lined up second for the start of Stage Two. He led for two laps before losing some positions after getting caught in middle lane. As the stage went on, he was able to find his teammates and together they used the bottom to work their way forward. In an eventful final lap, Allgaier got shuffled back, ending Stage Two in the 11th position.

Under the stage-ending caution, crew chief Jason Burdett called Allgaier in for four tires, fuel and an air-pressure adjustment.

When the green flag waved for the final stage on lap 56, Allgaier quickly found his teammates and the driver of the No. 7 was up to fourth by lap 60. The front cars ran single-file for several laps and Allgaier was still in fourth when a caution came out for an incident with 37 laps to go. Allgaier brought the BRANDT / TradeMark Nitrogen Camaro in for a fast pit stop for two tires and fuel.

He restarted in seventh with 33 laps to go and was quickly back up to fourth. He was once again in line with his three teammates and they collectively ran third through sixth, waiting for the right time to make a move forward. They were in the same spots when a big wreck brought out the caution flag, and eventually the red flag, with 18 laps to go. Allgaier restarted in fourth and was running in the outside line behind his teammate Noah Gragson when he was involved in a multi-car incident with eight laps remaining. The No. 7 Camaro suffered too much damage for Allgaier to continue on and he was ultimately scored with a 28th-place result.

“It’s disappointing that we weren’t able to be there racing for the win at the end there. I hate it for everybody at JR Motorsports and for all of our guys on the No. 7 team. Our BRANDT / TradeMark Nitrogen Camaro was really good. I don’t know what it is about this year. We’ll head to Pocono next week and try to turn things around.”