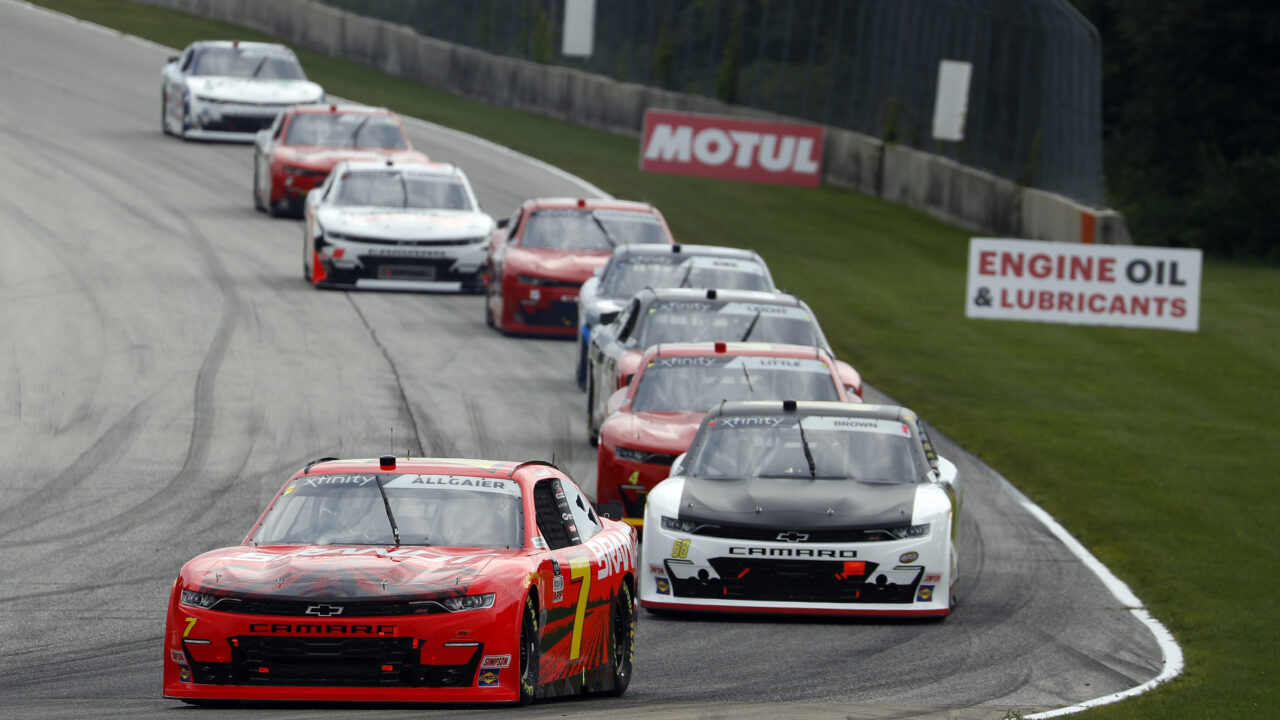 Justin Allgaier, driver of the No. 7 BRANDT Professional Agriculture Camaro, was battling inside the top 10 after a late-race restart in Saturday’s event at Road America when he was involved in a multi-car incident. Allgaier made heavy impact with a retaining wall, causing severe damage to the BRANDT Camaro and ending his day early. The 34-year-old driver was relegated to a 30th-place finish.

Firing off from the 12th position after the field was set by random draw, Allgaier had little time to get a feel for his Camaro before a quick caution came out on lap 2. He restarted in the same position and had worked his way up to 10th when another yellow flag waved on lap 8. During the caution period a weather system entered the area, causing a lengthy red flag for lightning.

Once the red flag lifted, crew chief Jason Burdett called Allgaier to pit road for rain tires to help navigate the slick track. The JR Motorsports driver restarted just inside the top 10 and raced his way to sixth before the green-and-white checkered flag waved to end Stage One. During the stage break, the team took the opportunity to pack the No. 7 Camaro full of fuel.

With teams on varying pit strategies, Allgaier lined up 21st for the start of Stage Two on lap 18 and methodically advanced his position to 16th by lap 21. As the weather cleared the area, Allgaier continued to give feedback to the team on the amount of moisture on the track. Once it was dry enough, the team called Allgaier to pit road for a green-flag stop on lap 23 to switch to the dry, slick tires. Some other teams followed suit as the laps wound down in Stage Two and Allgaier ended the stage in the 12th position.

Under the stage-ending caution, Burdett radioed Allgaier to bring the No. 7 Camaro to pit road for fuel-only.

When the field lined up for the final stage, Allgaier was in the second position and wasted little time battling for the lead once the green flag dropped on lap 33. The Illinois native led for one lap before being surpassed by a car with fresher tires, but continued to race inside the top five. When a caution came out with six laps remaining, Allgaier and the No. 7 team took the opportunity to get a set of fresh tires.

He restarted inside the top 10 with four laps to go and was battling for position when he was involved in a multi-car incident that sent him off the track and into a retaining wall. The contact caused big damage to BRANDT Camaro and brought an early end to Allgaier’s day. He was ultimately scored with a 30th-place finish and remains seventh in the NASCAR Xfinity Series point standings.

“I’m really disappointed our day ended the way it did. This No. 7 team worked hard all day long and we had some good speed in our BRANDT Professional Agriculture Camaro. I really thought we had a shot at a top-five finish, but instead we ended up with a wrecked racecar. Eventually our luck will turn around. We’ll head back and regroup and hopefully put together a solid finish at Daytona.”