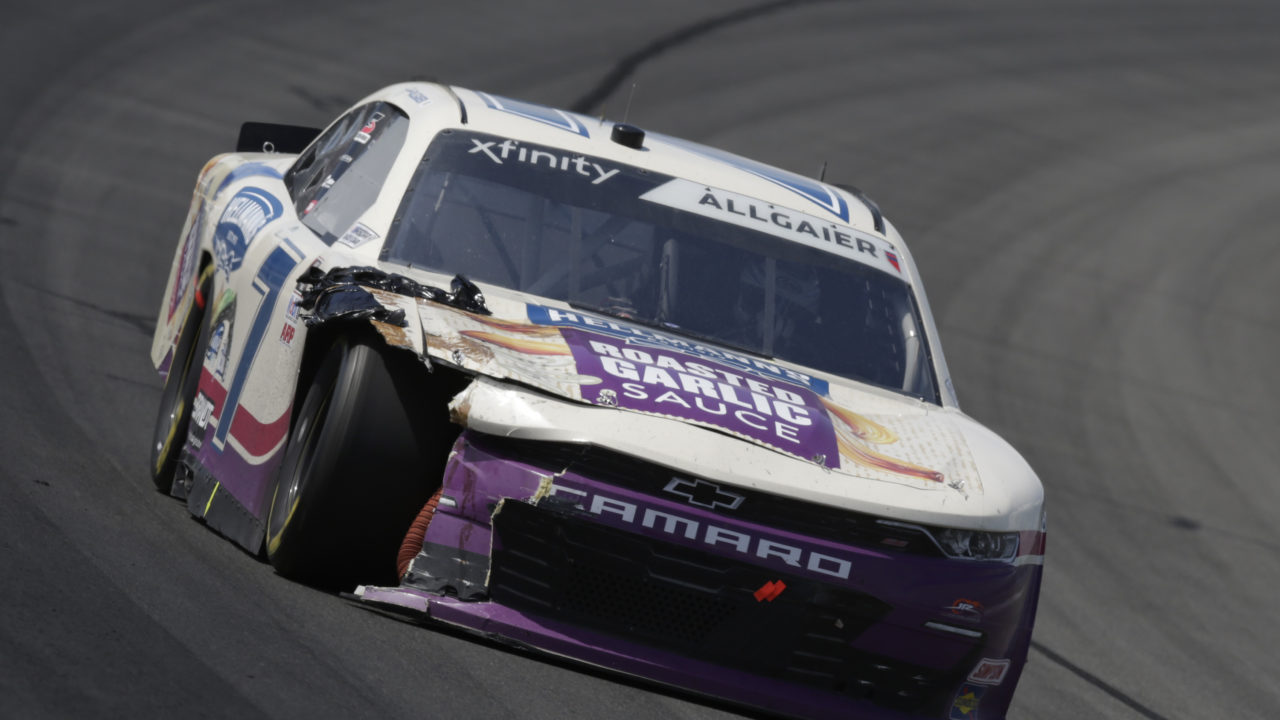 Justin Allgaier, driver of the No. 7 Hellmann’s Roasted Garlic Sauce Chevrolet, rebounded from getting caught up in a wreck in the final stage to earn a sixth-place finish in Sunday’s race at Pocono Raceway. Allgaier additionally earned a coveted playoff point after winning Stage Two, helping him move up into the seventh position in the NASCAR Xfinity Series point standings.

Allgaier rolled off fourth for the start of Sunday’s race and worked his way up to second before the caution flag waved for a wreck on the first lap. Another quick caution slowed the race again, but once the field was back under green, Allgaier continued to battle inside the top five. He got sideways loose after driving over fluid on the track and made an incredible save, moving back up to fourth in a hurry after losing ground. When yet another yellow flag came out on lap 15, the No. 7 team opted to come to pit road for four tires and fuel. With some cars staying out, Allgaier restarted in sixth on lap 18 and advanced his position to third before the green-and-white checkered flag waved to end Stage One on lap 20.

Staying out under the stage-ending caution, Allgaier lined up in the second spot for the start of Stage Two on lap 27. He held steady in that same position and started closing in on the leader. Allgaier was battling for the top spot with four laps remaining in the stage and eventually took over the lead on lap 36 to score his fifth stage win of the season. Under the stage-ending caution, crew chief Jason Burdett called Allgaier in for four fresh tires and fuel.

Allgaier fired off from the fourth position when the green flag dropped for the final stage and quickly worked his way back up to second. With 43 laps to go, he retook the top spot before a caution waved for an incident on the track. Under the caution, Allgaier came to pit road for a fuel-only stop and he lined up 10th for the restart in the Hellmann’s Roasted Garlic Sauce Camaro. Green flag conditions were short-lived as a multi-car incident ensued. Allgaier and the No. 7 Chevrolet were collected in the process, resulting in damage to the right front of the car.

The team made multiple stops for repairs under the yellow flag and Allgaier lined up 21st for the restart, one lap down. The No. 7 Camaro, though damaged, still showed good speed and Allgaier was scored as the first car one lap down when an opportune caution came out with 22 laps remaining, allowing Allgaier to take the free pass and get back on the lead lap.

Burdett called Allgaier in under the caution for the team’s final stop of the race for four tires and fuel. He restarted in 14th and with determination he surged forward, advancing to the fifth position with 12 laps to go. He held steady in that same position until yet another caution flag came out with six laps remaining.

Allgaier continued to battle hard in the final laps, ultimately ending the day with a sixth-place finish in his damaged No. 7 Hellmann’s Roasted Garlic Sauce Chevrolet.

“I am really proud of this team and the effort they put in today. We had a fast Hellmann’s Roasted Garlic Sauce Camaro and to rally back the way we did with a top-10 finish after getting damage from that wreck shows you just how good our car was. This team never gives up and we showed that today.”