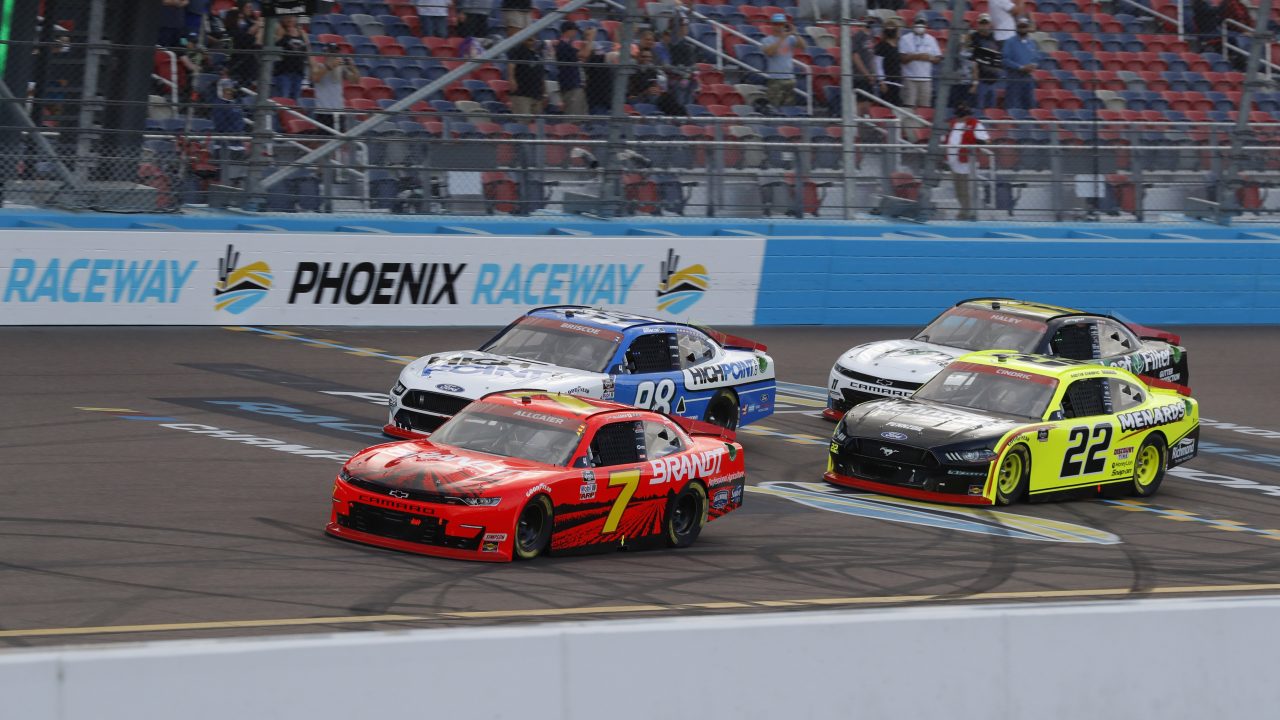 Justin Allgaier and the BRANDT Professional Agriculture team gave it everything they had in Saturday night’s season finale at Phoenix Raceway, coming up just short of the NASCAR Xfinity Series championship. Allgaier led a race-high 76 laps and battled inside the top five all afternoon long, ultimately taking the checkered flag in fifth. The JR Motorsports driver ended the 2020 season with a career-best second-place finish in the NXS championship standings. It was the fourth time Allgaier was in the running for the title as part of the Championship 4 in the last five years.

Allgaier started on the pole for the 200-lap race on the desert oval and held point out front until the first caution of the day on lap 3. Under the yellow, he reported to crew chief Jason Burdett that he was happy with the balance on the BRANDT Camaro. On the lap-7 restart, the front of the field went three-wide into the dogleg, Allgaier battled hard for position and was scored in the third spot when the field was slowed for the competition caution at lap 20.

Still happy with the car, the team opted to stay out under the caution and Allgaier lined up in second for the restart after utilizing the choose cone. He continued to race inside the top three for the remainder of the stage, taking the green-and-white checkered flag in third. During the stage-ending caution, Allgaier reported that the BRANDT Camaro was a little tight through the corners, so the team decided to make an air-pressure adjustment when they called Allgaier to pit road for four tires and fuel.

A fast stop by the No. 7 team allowed Allgaier to line up on the front row for the start of the second stage on lap 53. He wasted little time taking over the lead and was still out front when an incident on the track brought out the caution on lap 75. Staying out under the yellow, Allgaier restarted out front on lap 80 and maintained the lead for two laps before fellow championship contender Austin Cindric worked his way by. When the field took the green-and-white checkered flag at lap 90 to end Stage Two, the Illinois native was scored in second place. The BRANDT Camaro still needed to rotate a little better through the center of the turns, so the team brought Allgaier to pit road during the stage break for four tires, fuel and another air-pressure adjustment.

Allgaier took the green flag for the final stage from the second position and once again powered to the lead, pacing the field for nearly 30 laps before Cindric made the pass for the top spot. As a long green-flag run ensued, the handling on Allgaier’s Camaro started to fade. He was running in the third spot when Burdett called him to pit road for a scheduled green-flag stop around lap 160 for four fresh tires and fuel. The field had nearly cycled through pit stops when a wreck brought out the caution with 30 laps to go.

Under the yellow flag, the No. 7 team made to decision to bring Allgaier back to pit road for their last set of tires while some of the other lead lap cars opted to stay out on the track. He restarted in third on lap 177 and battled for the lead for a few laps before settling into the second position. Allgaier kept race leader Cindric in his sights and when an opportune caution came out with three laps remaining, the team knew they’d have one more shot at battling for the win and the championship.

Allgaier was out of fresh tires, so he remained on the track under the caution and would restart from the point position. NASCAR’s version of overtime proved to be eventful as the battle for the championship came down the final lap. Allgaier ultimately took the checkered flag in the fifth position and earned a career-best second-place finish in the NXS championship standings. He ended the season with three wins, 11 top fives and 19 top 10s.

“I’m so proud of our guys and proud of everyone at JR Motorsports. We had a shot at it, and when it’s all said and done that’s all you can ask for. BRANDT has been with me for 10 years now and we wanted so badly to get them to Victory Lane tonight and to bring home the championship, we just came up a little short. We’ll be back next year and hopefully finish one spot better.”