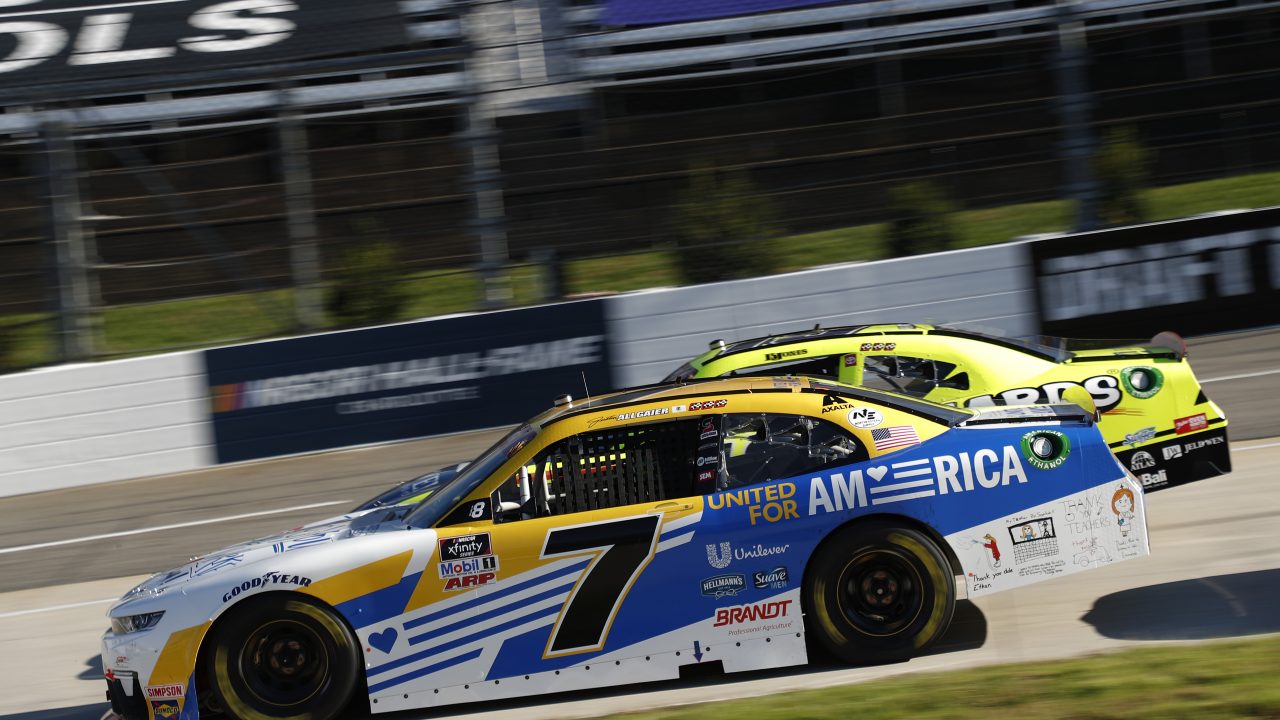 Justin Allgaier, driver of the No. 7 Unilever United for America Camaro, drove to an impressive second-place finish Saturday at Martinsville Speedway and solidified his spot in the Championship 4 in the NASCAR Xfinity Series Playoffs. This marks the fourth time in five seasons that the veteran driver and the No. 7 team will head to the season finale with a shot at the title.

Rolling off the grid from the sixth position, Allgaier battled his way to fifth before the first caution of the race came out on lap 4. He reported to crew chief Jason Burdett that the balance on his Unilever United for America Chevrolet was really good, just a touch tight in the center. Restarting fourth after utilizing the choose cone to start on the outside line, Allgaier continued to race inside the top 10 through a series of cautions. He restarted fifth on lap 42 and got stuck on the outside while racing for position, but still remained inside the top 10 for the closing laps of the stage to cross the line in eighth when the green-and-white checkered flag waved on lap 60. Under the stage-ending caution, the Illinois native reported to his team that he needed to rotate better through the center and have better drive off, so they made an air-pressure adjustment and chassis adjustment when he came to pit road for fresh tires and fuel.

Allgaier took the green flag for the second stage from the sixth position, but lost a few spots, radioing to the team when the caution came out that the No. 7 Camaro fired off much tighter that run. He restarted eighth on lap 80 and press forward from there, working his way to fifth before another yellow flag waved on lap 105. Opting to stay out, he lined up fourth for the restart and held his position to end the second stage inside the top five. To continue to improve the handling and help Allgaier’s Camaro get off the corner better, the team made another adjustment during the pit stop under the stage-ending caution, along with taking four tires and fuel.

Due to cars being on varying pit strategies, Allgaier fired off 16th and was stuck towards the back for the opening laps of the final stage. After a caution came out on lap 132, he restarted 14th and steadily improved his position, working his way to 10th by lap 150. His climb didn’t stop there as he continued to surpass cars, racing up to fifth before a caution came out on lap 182. Burdett and the No. 7 crew took the opportunity to bring Allgaier in for their final pit stop of the race for fresh tires and fuel.

Allgaier took the green flag in fourth on lap 189 and gained ground on the leaders ahead of him, battling his way to second on lap 199. Still in the runner-up position when the last yellow flag of the day waved on lap 214, he restarted on the outside and battled side by side with the leader for the first couple laps before settling into the second position, where he remained until taking the checkered flag.

With the runner-up result, Allgaier will advance to the Championship 4 for the fourth time in the last five seasons. He’ll head to Phoenix Raceway next weekend with a shot at the NXS title.

“This No. 7 Unilever United for America Camaro did a fantastic job all day long. They made fast stops and great adjustments and gave me a great car. I really wish we could have gotten this awesome paint scheme to Victory Lane for Unilever and all the essential workers, but it feels really good to be able to head to Phoenix next week as part of the Championship 4. I’m so proud of this team and everyone at JRM Motorsports. Phoenix is a great track for us and I can’t wait to head there and see what we can do.”