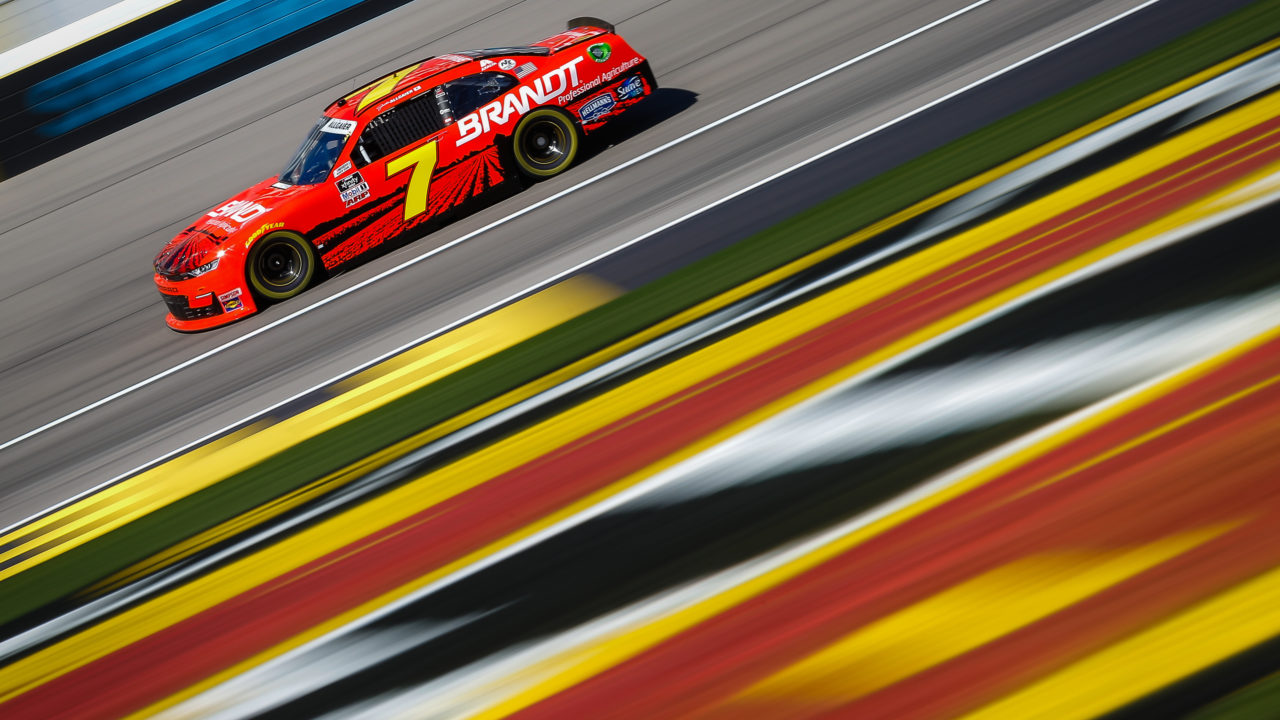 Justin Allgaier, driver of the No. 7 BRANDT Professional Agriculture Camaro, led 63 laps and scored his second stage win of the season during the Boyd Gaming 300, ultimately coming home with an eighth-place finish. Allgaier and the No. 7 team were fast early, leading laps in the first stage on Saturday afternoon. When rain postponed the remainder of the race to Sunday, the team continued to be a force to be reckoned with. Ending the day with a strong top-10 finish, the JR Motorsports driver moved up to ninth in the NASCAR Xfinity Series point standings, just 22 points behind the leader.

The starting lineup was set according to the rule book after qualifying was rained out on Saturday morning. Allgaier rolled off the grid from the fourth position and wasted little time working his way forward, taking over the lead on lap 3. He reported to the team early into the run that the BRANDT Camaro fired off good, but was a little greasy with the right-rear tire. The JR Motorsports driver was still pacing the field when an on-track incident brought out the first caution of the day on lap 18. Crew chief Jason Burdett called Allgaier to pit road for four tires, fuel and adjustments. After completing the stop, Allgaier needed to put the BRANDT Chevy in reverse to get around the car pitted ahead of him, costing him valuable spots on pit road. The Illinois native restarted in 10th on lap 23 and advanced his position to fifth before the green-and-white checkered flag on lap 45.

During the latter part of the stage, Allgaier relayed that the No. 7 Camaro was tight with the front and had nothing to lean on with the right-rear tire. Under the stage-ending caution, the team made a stop for four tires, fuel and a track-bar adjustment. Before the field was able to get Stage Two underway, another rain cell enveloped the track, bringing out the red flag. As more rain moved in, NASCAR was forced to postpone the remainder of the race to Sunday.

Allgaier fired off in the fourth position for the start of Stage Two on lap 55 and advanced to third before a caution came out on lap 71. Under the yellow flag, he reported that he was struggling to keep the right rear loaded up. He restarted in second on lap 77 and powered to the lead, holding onto the top spot for the remainder of Stage Two, earning his second stage win of the season. Under the stage-ending caution, Burdett called Allgaier in for four tires, fuel and a track-bar adjustment. A fast stop by the No. 7 pit crew allowed Allgaier to maintain the lead off of pit road.

The driver of the BRANDT Camaro held point after the lap-96 restart for the final stage. Relaying to the team that the No. 7 Chevy was tight through the center of the turns and greasy on exit on lap 102, Allgaier continued to lead until Austin Cindric made the pass on lap 124. He was running in the fourth position when green-flag pit stops ensued shortly after lap 140. The team called Allgaier in for four tires, fuel and a wedge adjustment and when stops cycled through, he maintained his fourth-place running position on the track. During the final caution flag of the night, the majority of the field came to pit road one last time. Allgaier had reported under the caution that the previous adjustment helped the exit, but hurt the center, so one last round of adjustments were made during the team’s pit stop. He restarted in fourth on lap 169, but as the run went on, the BRANDT Camaro’s handling began to fade. Allgaier continued to battled through, ultimately taking the checkered flag in the eighth position.

“We had a really good BRANDT Professional Agriculture Camaro early in the race and led a lot of laps, and we were able to get that stage win. Unfortunately at the end of the race the car just wasn’t where we were needing it to be to be in position to compete for the win. It wasn’t from lack of effort. Jason Burdett (crew chief) and everyone on this team work their tails off. This was our first mile-and-a-half of the season and we had some really good speed, so I’m looking forward to seeing what we can do the rest of the year.”