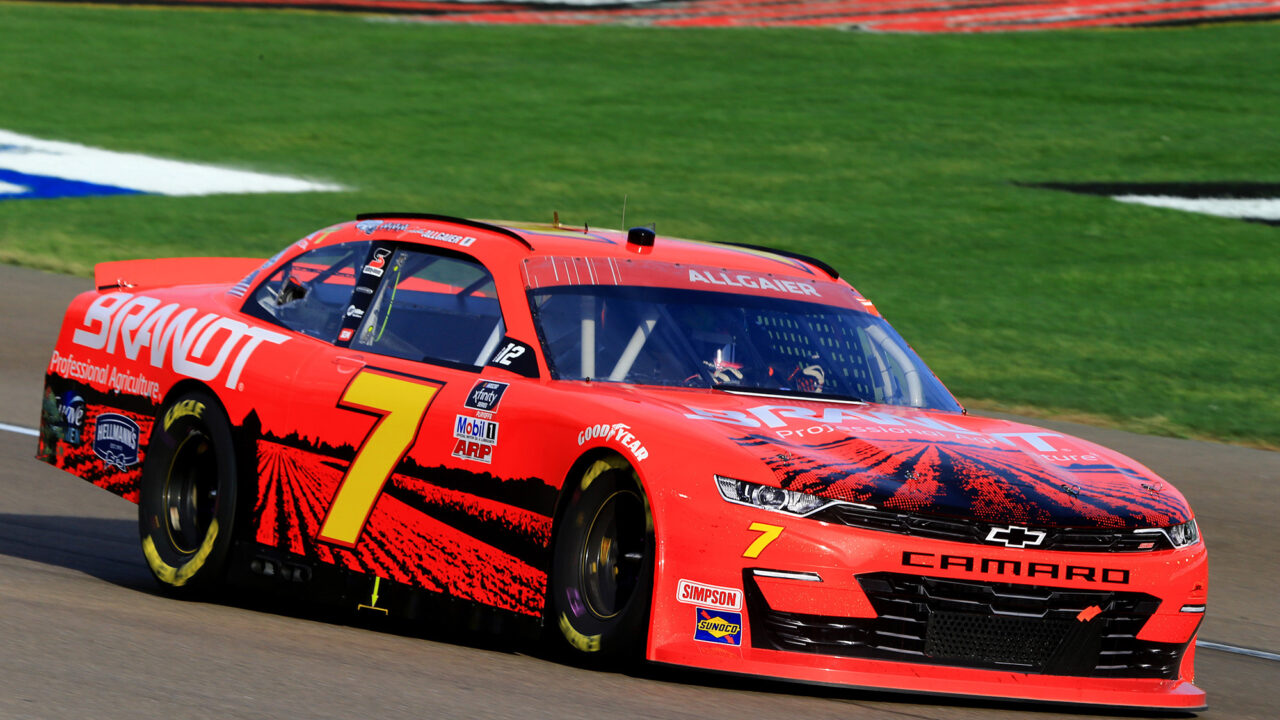 Justin Allgaier and the No. 7 BRANDT Professional Agriculture team earned a hard-fought fourth-place finish in Saturday’s opening race of the NASCAR Xfinity Series Playoffs at Las Vegas Motor Speedway. The result was the fourth consecutive top-five finish for Allgaier and his ninth on the season. He heads to Talladega Superspeedway next weekend fourth in the playoff standings, just 42 points behind the leader.

Allgaier rolled off third in the BRANDT Camaro for the 200-lap race, but lost momentum after the start, falling back to sixth before the first caution of the race on lap 9. Just prior to the yellow flag, the JR Motorsports driver reported to the team that the BRANDT Chevy was good in Turns 1 and 2, but was up and out of the track in Turns 3 and 4. Opting not to pit, Allgaier lined up in the eighth position after utilizing to choose rule to restart in the outside line.

He continued to race inside the top 10 before another caution came out on lap 19. Staying out once again, Allgaier restarted in seventh, but dropped back as the run went on after the BRANDT Camaro began losing more grip. In the closing laps of Stage One, Allgaier was able to battle through the tough handling condition, advancing his position from 13th to 11th before the green-and-white checkered flag waved on lap 45.

Under the stage-ending caution, crew chief Jason Burdett called Allgaier to pit road for four tires and fuel. The team also made multiple adjustments in an effort to improve the BRANDT Camaro’s handling. Allgaier took the green flag for Stage Two in 14th and steadily advanced his position on the track, moving into the top 10 on lap 72. The adjustments seemed to do their job as the Illinois native continued his march forward to end the caution-free Stage Two in ninth, collecting two coveted stage points in the process.

Prior to the start of the final stage, Allgaier brought the No. 7 Chevy to pit road for another round of adjustments, four tires and more fuel. The veteran driver lined up just inside the top 10 and when the green flag waved to begin the final stage on lap 96, Allgaier wasted little time advancing his position, powering his way to fourth by lap 103.

Allgaier continued to run in that same spot as a long green-flag run ensued. On lap 147, Burdett called the JR Motorsports driver to pit road for a fast green-flag stop for four tires, fuel and an adjustment. Allgaier was running in the fifth position with one car left before the pit stops cycled through when a caution came out on lap 155. Staying out, Allgaier restarted inside the top five, but with some cars on fresher tires, he lost some ground and was scored in the eighth position when the final caution of the race came out on lap 187.

Under the yellow flag, the team took the opportunity to put on their last set of fresh tires, with another fast stop allowing Allgaier to gain a position on pit road. The driver of the No. 7 Camaro used the chose rule to restart on the outside line on lap 191. Allgaier battled hard in the closing laps, racing his way back inside the top five to bring home a fourth-place finish in the opening race of the NXS Playoffs.

“I’m really proud of this BRANDT Professional Agriculture team. They never gave up all night long. I felt like we were able to make good adjustments on the car and really get ourselves in better track position at the end there by the choose rule. These points are so important. Every position counts. As bad as we started the night off, I was getting a little flustered under the collar, but these guys rallied behind me and gave me the car that we needed at the end and we were able to get a solid top five.”