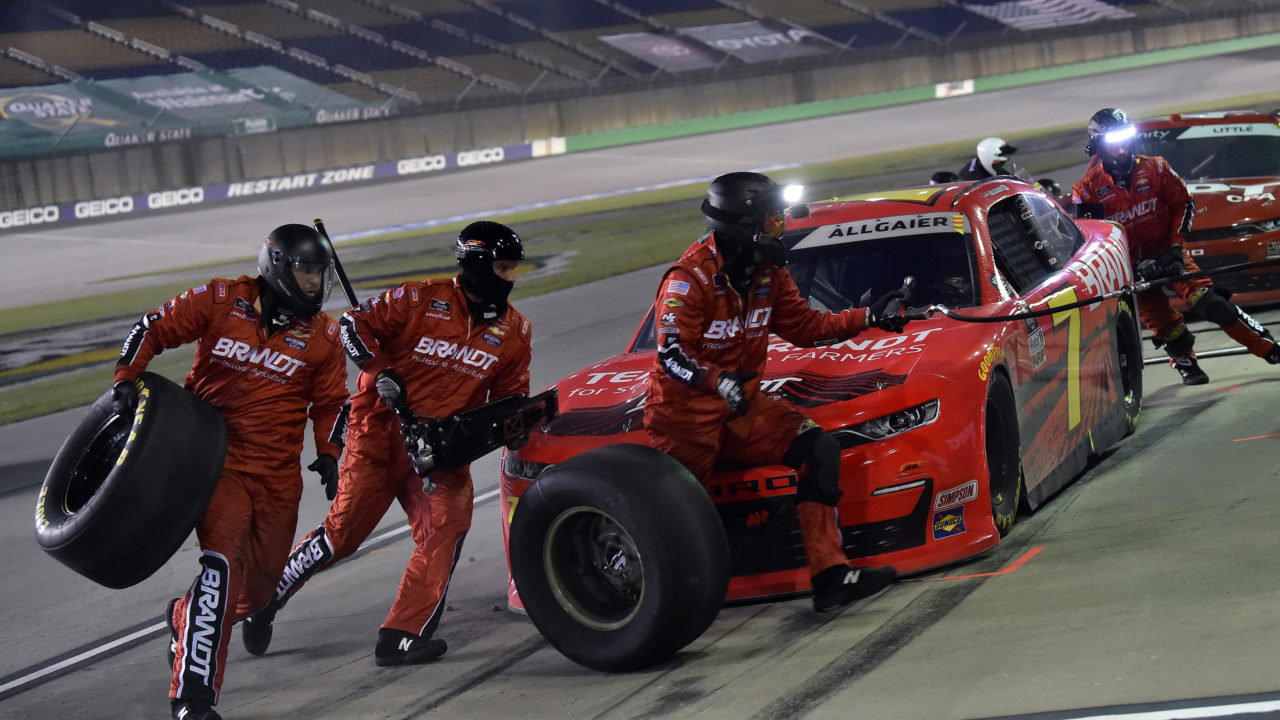 Justin Allgaier, driver of the No. 7 Thank You Team BRANDT Chevrolet, raced inside the top 10 for much of Thursday night’s NASCAR Xfinity Series race at Kentucky Speedway. Unfortunately bad luck struck again and Allgaier was caught up in an incident during NASCAR’s version overtime that caused damage to the No. 7 Camaro, ultimately relegating him to a 20th-place finish. Allgaier remains sixth in the NXS point standings heading into Friday night’s second event at Kentucky Speedway.

Allgaier rolled off 10th for the 134-lap race and had worked his way up to ninth before the competition caution waved at the completion of lap 15. Under the yellow flag, he relayed to crew chief Jason Burdett that the BRANDT Camaro was lacking rear grip. Restarting in ninth, the Illinois native steadily worked his way forward, but got loose while battling for the fifth position. Dropping back a few spots, Allgaier battled hard to work his way back forward, ending the first stage in the eighth position on lap 30. The team called Allgaier in under the stage-ending caution for four tires, fuel and adjustments to try to improve the handling on the No. 7 Camaro.

Lining up in 11th for the start of Stage Two on lap 38, he pressed forward and worked his way inside the top 10. As the run went on, he continued to gain positions on the track, ultimately ending the caution-free second stage in the sixth position on lap 60. Under the stage-ending caution, Allgaier reported that the BRANDT Chevrolet needed more grip on entry and at max compression, so the team called him in for another round of adjustments, four tires and fuel.

A fast pit stop put Allgaier in the sixth position to start the final stage. He was up to fourth by lap 83 and was battling for the third position when a caution came out on lap 89. Burdett radioed for Allgaier to come to pit road for the last stop of the night for four tires and fuel. He lined up 11th for the restart with 40 laps to go and utilized a three-wide move to gain five positions in one lap. He was in sixth when another caution flag waved with 32 laps remaining. Back under green, Allgaier raced his way up to fourth and remained inside the top five through another caution period.

The JR Motorsports driver was in the fourth position when another wreck brought out they yellow flag yet again, sending the race into NASCAR’s version of overtime. Allgaier lined up fourth for the green-white-checkered finish, but contact from another car caused Allgaier to lose track position and he was caught up in an incident on the last lap, damaging his No. 7 Camaro. Allgaier ultimately ended the night with a 20th-place finish.

“That was a really frustrating ending to our race there. The guys did a great job working on adjustments all night. We had a fast car and had great track position for the final restart. I really thought we were going to end up with a top-five finish. We’ll regroup and be ready to go for the win tomorrow night with our BRANDT Camaro.”