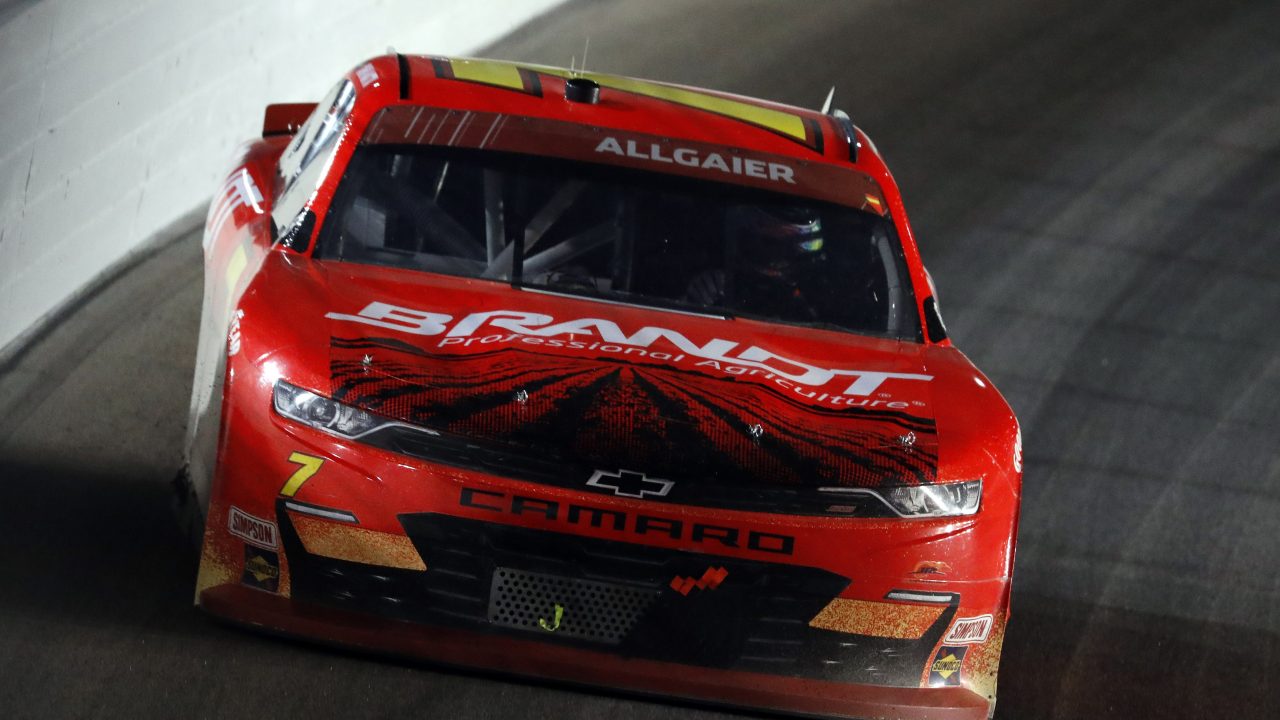 Justin Allgaier, driver of the No. 7 BRANDT Professional Agriculture Camaro, came home with a hard-fought 10th-place finish in Saturday’s NASCAR Xfinity Series event at Kansas Speedway after being involved in a late-race multi-car incident. The effort was his 17th top-10 result of the season and enough for him to move up to second in the NXS Playoff standings. He’ll head to the second race in the Round of 8 of the playoffs 11 points above the cutoff line for the Championship 4.

Allgaier rolled off seventh for the 200-lap race and was running in the ninth position when the first caution of the race came out on lap 11. He radioed to the team that the BRANDT Camaro was tight on landing and free off the corners. Restarting 10th after choosing the outside line, he was able to avoid the melee when a wreck ahead of him ensued, bringing out the caution yet again. Back under green, Allgaier lost a couple positions but drove his way back up to ninth before the field was slowed for the competition caution at the completion of lap 25.

Under the yellow flag, Allgaier reported to crew chief Jason Burdett that the No. 7 Chevy was tight in and free off the corners. Staying out, Allgaier restarted inside the top 10 on lap 29 and fought through the tough-handling condition to race his way to seventh before the green-and-white checkered flag waved to end Stage One.

Prior to the start of Stage Two, Burdett and the team made a big round of adjustments to the BRANDT Camaro during the pit stop for four tires and fuel to try to help with the handling issues. Allgaier took the green flag for the second stage in ninth on lap 51, but another on-track incident shortly after the restart brought out the yellow flag. The Illinois native reported that the BRANDT Chevy fired off much better that run and lined up eighth for the restart. This time the No. 7 Camaro was freer than the previous run as Allgaier informed the crew that he was loose everywhere. Undeterred by the loose-handling condition, Allgaier continued to race inside the top 10, battling his way to seventh before the conclusion of Stage Two on lap 90.

During the stage break, Burdett called Allgaier to pit road for four tires, fuel and a chassis adjustment to continue trying to improve the handling on the BRANDT Chevy. Lining up in the eighth position on lap 96, it didn’t take long for Allgaier to report back that there was no change in balance. Still, he continued to race inside the top 10 during what turned into a long green-flag run. He was closing in on the sixth position when cars began making their way to pit road for green flag stops on lap 144. Just two laps later, Allgaier made his way in to his pit stall for four tires, fuel and multiple adjustments.

Back out on track, Allgaier was scored in the eighth position and the field had almost cycled through pit stops when a caution flag waved for a spin on lap 156. Restarting eighth, Allgaier lost some ground to cars on fresher tires and dropped back to 11th before the field was slowed by the caution flag yet again. He relayed to Burdett that the BRANDT Camaro was loose in and off of the corners and tight across the center. The team took the opportunity to come to pit road for their last set of fresh tires and to take one more swing at an adjustment to the No. 7 Chevy.

On the restart, Allgaier was battling for position when he was involved in a multi-car incident that brought out the red flag. The damage to the BRANDT Chevy was minimal, so the team opted not to pit for repairs. Allgaier took the green flag inside the top 10 with 24 laps to go and battled four-wide in the closing laps following another late-race caution to take the checkered flag in the 10th position.

“Tonight just wasn’t our night. I hate it for all the guys on this BRANDT Professional Agriculture team. They worked hard on adjustments and we had great pit stops all night long. We just couldn’t get a good handle on our Chevrolet. It was definitely not from lack of effort. We’ll go back to the shop and regroup and get ready to go for the win next weekend at Texas.”