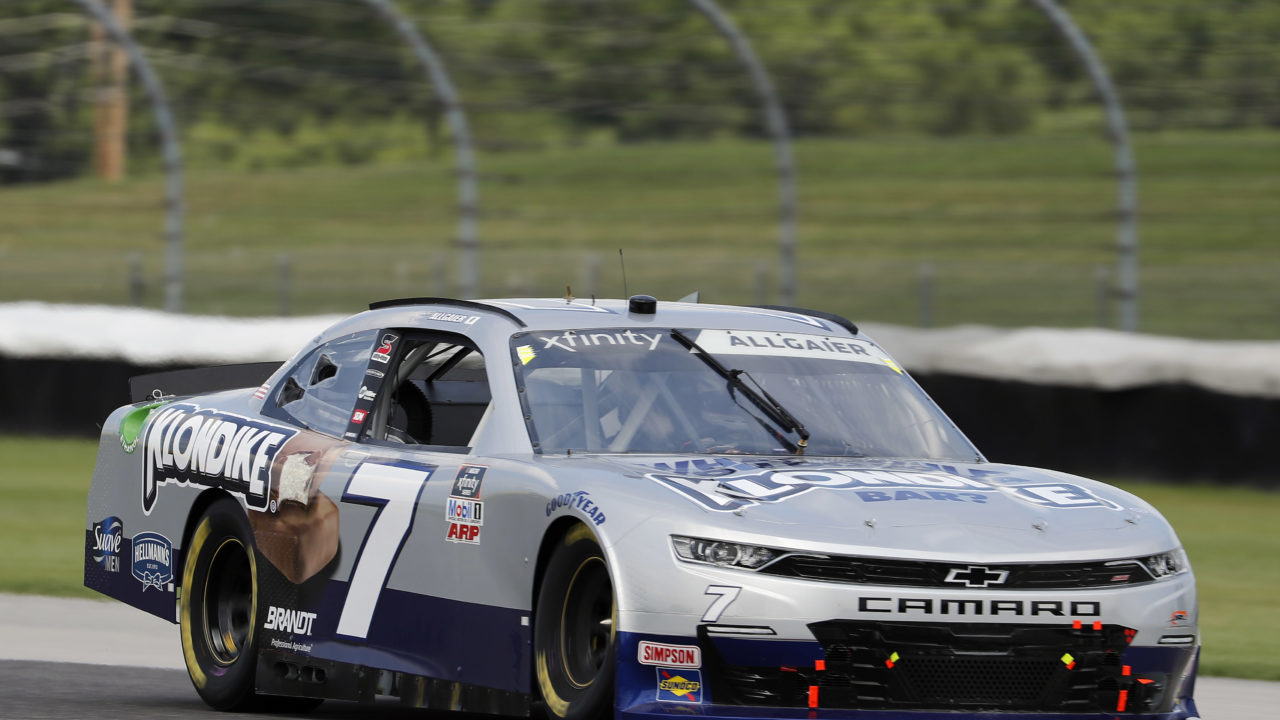 Justin Allgaier, driver of the No. 7 Klondike Chevrolet, overcame a late-race pit road penalty to drive to a seventh-place finish in Saturday’s Pennzoil 150 on the Indianapolis Motor Speedway road course. The effort was Allgaier’s sixth top 10 of 2020. Allgaier finished second in each of the first two stages, scoring valuable stage points that helped propel him to sixth in the NASCAR Xfinity Series point standings.

Allgaier started the race from fifth and wasted little time advancing his position. By lap 2, he found himself in the lead and paced the field for two laps before Austin Cindric worked his way by. When the first caution flag of the race came out on lap 18, Allgaier reported to the team that the No. 7 Klondike Camaro was losing rear-lateral grip as the run went on. Ultimately, Stage One ended under the caution and when the green-and-white checkered flag waved, the 34-year-old driver was scored in the second position, earning nine coveted stage points in the process. Under the caution, crew chief Jason Burdett called Allgaier in for four tires, fuel and an air-pressure adjustment.

A chaotic pit road under the caution put Allgaier just outside the top five for the start of Stage Two on lap 24. He methodically raced his way forward throughout the stage, moving up to the third position by lap 32. Allgaier was still in that same spot when a caution came out on lap 36. He radioed that the last adjustments made the Klondike Chevrolet tight through the center of the corners, so the team called him to pit road for four tires, fuel and another air-pressure adjustment.

Allgaier restarted in eighth with some cars on varying pit strategies, but pressed forward, maneuvering his way to second by the end of Stage Two. The finish allowed him to collect nine more stage points on the day.

Allgaier fired off in the second position for the final stage on lap 44 and continued to race inside the top five, running in fourth with 13 laps to go. The Illinois native was in that same spot when the final caution of the race came out with 10 laps remaining. Allgaier joined the rest of the field for their final pit stops of the day. Upon leaving pit road with fresh tires and fuel, Allgaier was alerted that the team was given a pit road penalty for removing equipment from the pit stall and would have to start at the rear of the field.

Undeterred by the loss of track position, Allgaier made quick work of the cars ahead of him and raced his way to seventh before the checkered flag waved.

“We had a fantastic Klondike Camaro today. It’s unfortunate that we got that pit road penalty at the end there because I know we had a shot to battle for the win or a top-five finish. To come back through the field and get a top 10 is still a solid day. I’m proud of this team and all of the effort that they put in. I’m ready to see what we can do next week in Kentucky.”