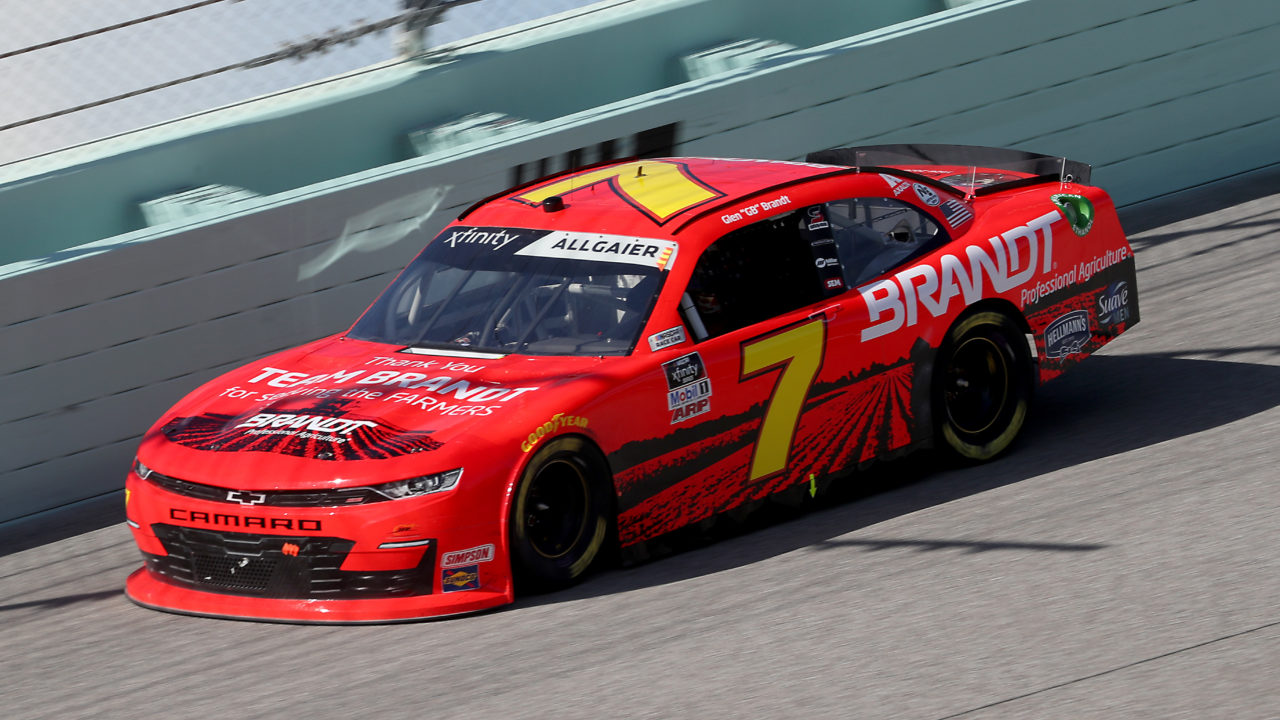 Bad luck struck Justin Allgaier, driver of the Thank You Team BRANDT Camaro, in Saturday’s NASCAR Xfinity Series race at Homestead-Miami Speedway. In the final stage, the 34-year-old driver had a tire go down, causing Allgaier to make contact with the wall. After pitting for fresh tires, Allgaier reported he had no brakes and was forced to go to the garage for repairs. Quick work by the No. 7 team allowed him to get back out on the track to salvage a 32nd-place finish. With the result, Allgaier now sits sixth in the NXS point standings.

Starting the race in the 11th position, Allgaier raced his way inside the top 10 and reported early that the BRANDT Camaro was loose in, tight center, and free off, especially in Turns 3 and 4. He was running in eighth when the competition caution came out on lap 20 and the team opted to stay out on the track. With teams on varying pit strategies, several cars toward the back of the field came in for tires and those proved valuable as the stage went on. Allgaier battled hard, but fell to 15th before Stage One came to an end.

Under the stage-ending caution, the No. 7 team called Allgaier to pit road for four tires, fuel and an adjustment to try to improve the handling of the BRANDT Camaro

Taking the green flag for Stage Two in 11th on lap 46, Allgaier pressed forward into the eighth position. He relayed to crew chief Jason Burdett that the BRANDT Chevy’s handling hadn’t improved and the team took advantage of an opportune caution on lap 58 to bring Allgaier to pit road for an adjustments-only stop. He restarted deep in the field on lap 63 and managed to work his way up to 10th before the green-and-white checkered flag waved to end Stage Two.

At the conclusion of the stage, Allgaier radioed that the BRANDT Camaro was too tight that run, so the team made another adjustment along with fresh tires and fuel when the JRM driver came to pit road.

Allgaier lined up for the ensuing restart in eighth on lap 88 and it didn’t take him long to report an even tighter handling BRANDT Chevy. He continued fighting through the tough-handling condition, but reported a tire going down on lap 114 and that he made contact with the wall, damaging the No. 7 Chevy. He came to pit road for tires and after going back out on the track, relayed to Burdett that he had no brakes. The team directed Allgaier to go to the garage and they made quick repairs to the BRANDT Chevy. Allgaier made his way back out on the track 21 laps down, ultimately ending the race in the 32nd position.

“I don’t know what it is about this place, but we have terrible luck here. We fought handling issues all day long and this BRANDT team worked hard on adjustments, but then we had that tire go down and it kept going downhill from there. Hopefully we’ll have better luck tomorrow and come home with a solid finish.”