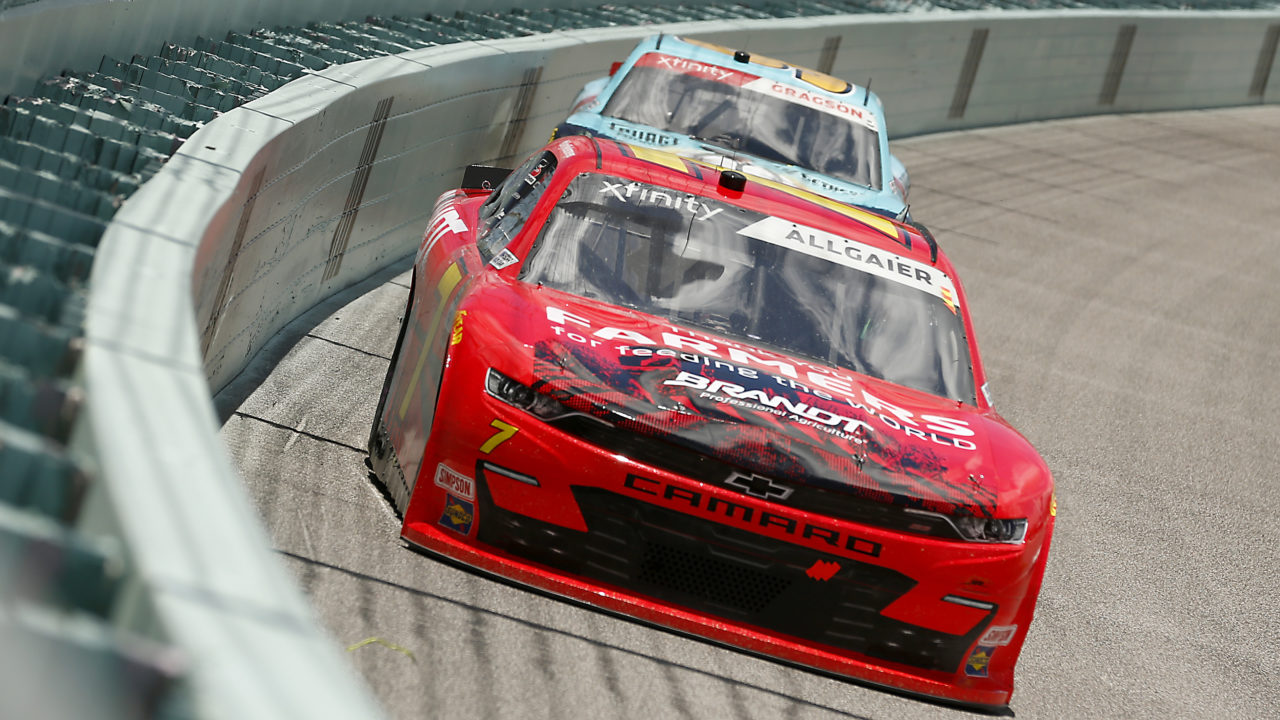 Justin Allgaier, driver of the No. 7 BRANDT “Thank You Farmers” Camaro, was running inside the top five during Sunday’s Contender Boats 250 at Homestead-Miami Speedway when a flat tire late in the race forced Allgaier to pit under green. Bad luck continued to plague the team from there and they ultimately ended the day with a 22nd-place finish. Allgaier currently sits eighth in the NASCAR Xfinity Series point standings with 10 races in the books.

Allgaier lined up at the rear of the field after being forced to a backup car for the second 250-mile race of the weekend and wasted little time marching forward. By the time the competition caution came out on lap 20, the Illinois native was in the eighth position. Under the yellow flag, he reported that the BRANDT Chevy was free on entry and exit, and tight through the center of the corners. Restarting in eighth, he continued to battle inside the top 10 until another caution flag waved on lap 33. On the restart, Allgaier lined up seventh and managed to pick off two spots to end the first stage in fifth.

Crew chief Jason Burdett called Allgaier to pit road under the stage-ending caution for four tires, fuel and a wedge adjustment. Upon entering his pit stall, Allgaier made contact with a tire from the No. 39 and lost several spots after the pit stop went long for repairs.

The driver of the No. 7 Camaro made quick work of the field after taking the green flag for Stage Two from the 23rd position. He raced his way inside the top 10 by lap 56 and continued his surge forward throughout the caution-free stage to take the green-and-white checkered flag in seventh. Just prior to the end of the stage Allgaier had reported that he was too tight through the center of the turns, so when the team got the opportunity to come to pit road, they gave the BRANDT Camaro four tires, fuel and a chassis adjustment.

Lining up for the final stage in 14th on lap 89 after a lengthy pit stop, Allgaier was undeterred by the minor setback and began his climb once again when the race was back underway. By lap 94 he was back inside the top 10 and was in the fifth position when scheduled green-flag pit stops ensued. The team called Allgaier to pit road with 45 laps to go for four tires and fuel and sent him back out on the track.

Allgaier moved into the fourth spot with 32 laps to go and maintained his position until he had tire go down after making contact with the wall. The driver of the BRANDT Camaro came to pit road with 21 laps to go and got back out on the track still inside the top 20. Racing inside the top 15 with six laps to go, Allgaier had another tire go down and once again had to pit under green flag conditions. Still, he continued to race hard in the closing laps to take the checkered flag in the 22nd position.

“I hate it for my team that our day took the turn that it did. They worked so hard last night to get this backup car prepared and we were fast today. We had a solid top-five BRANDT Camaro. I can tell you that I am ready to get out of Homestead. This track was not kind to us this weekend. We’ll go back and regroup as a team and go get them in Talladega.”