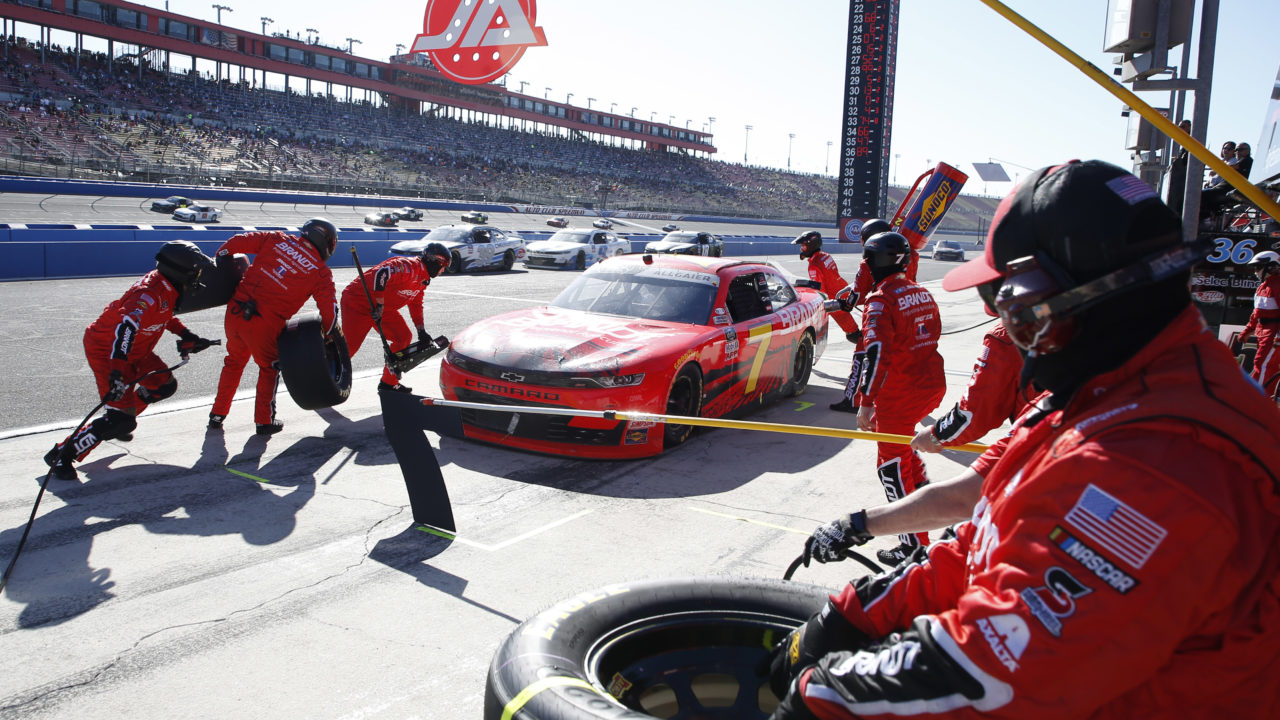 Justin Allgaier, driver of the No. 7 BRANDT Professional Agriculture Camaro, overcame late-race damage to his No. 7 machine to rally back for a 12th-place finish in Saturday’s Production Alliance Group 300 at Auto Club Speedway. The 33-year-old driver was running inside the top 10 when he struck debris that damaged the nose. Allgaier led three laps on the day, bringing his season total to 89 just three events into the year.

The JR Motorsports driver started 10th in the NASCAR Xfinity Series race and was running in that same spot on lap 16 when he relayed that the BRANDT Camaro was tight through the center of the turns and really free off. He continued to battle through the tough handling condition for the remainder of Stage One, taking the green-and-white checkered flag at the completion of lap 35 in 11th. Under the stage-ending caution, crew chief Jason Burdett called Allgaier in for four tires, fuel and multiple adjustments to improve the BRANDT Chevy’s handling.

When the green flag waved to start the second stage, Allgaier was in the 10th spot and steadily made progress towards the front. He was running in the eighth position when he reported to the team that the No. 7 Camaro was still a little too tight through the center of the turns, but was much better on exit. He stayed in that same spot for the balance of Stage Two, earning three stage points at its conclusion. During the caution the team opted to make another round of adjustments during the pit stop for four tires and fuel to help with the tight-handling condition of the BRANDT Chevy.

Allgaier fired off for the final stage in the sixth position and advanced to third before a caution came out on lap 82. Under the yellow, he radioed that the balance was much better on the BRANDT Camaro. The team elected to stay out and he restarted in third on lap 85. Allgaier was battling for the lead with teammate Daniel Hemric when another quick caution flag waved. Back under green, Allgaier swiftly took over the top spot on lap 91 before yet another on-track accident brought out the caution. Allgaier led a majority of the field to pit road and the No. 7 team made a fast stop for four tires and fuel. The JRM driver won the battle off pit road, but restarted in fifth on lap 96 behind cars who opted to stay out.

Allgaier was running inside the top 10 when he hit a tire carcass off of a car ahead of him on lap 108. The debris caused damage to the nose of the car, but luckily the caution came out and the team was able to make repairs over the course of two pit stops. He restarted in 17th on lap 113 and drove all the way up to 10thbefore the final yellow flag of the race waved on lap 126. Allgaier reported to the team that the car was much tighter after the damage. When pit road opened, the team continued repairs and Allgaier lined up 11th for the lap 131 restart. He continued to battle for position in the closing laps and tried to work his way back inside the top 10, but ultimately had to settle for a 12th-place finish.

“I’m really proud of this team. They never gave up today. Our BRANDT Professional Agriculture Camaro didn’t quite fire off the way we wanted it to at the start of today’s race, but they worked hard on adjustments during pit stops and we got the car handling a lot better. It’s just frustrating that we hit that debris and got damage because we were finally running at the front. The team did a good job on repairs and we were able to salvage a solid top-15 finish, but it still obviously was not the result we wanted. We’ll head on to Phoenix and try again.”