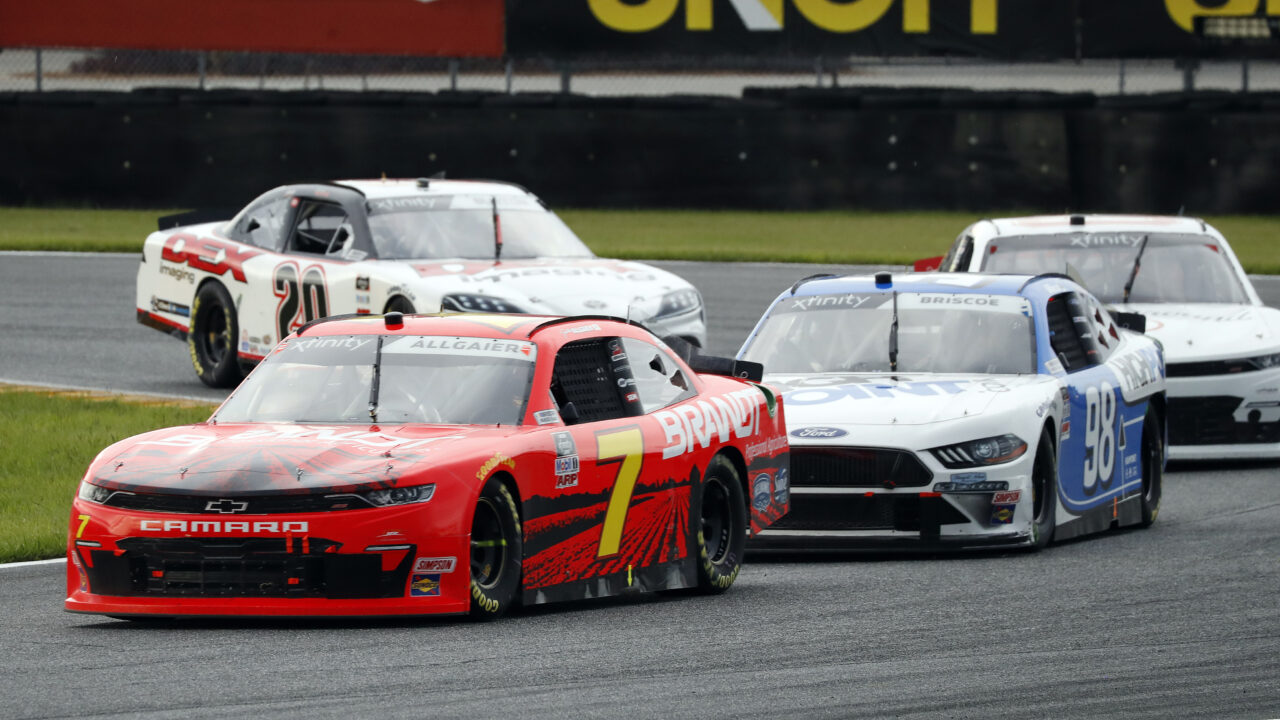 Justin Allgaier, driver of the No. 7 BRANDT Professional Agriculture Camaro, rebounded for a ninth-place finish in Saturday’s road course race at Daytona International Speedway after contact from another car sent the JR Motorsports driver for a spin with three laps to go while running third. It was the first time the NASCAR Xfinity Series competed on the 3.61-mile course. The ninth-place result was Allgaier’s second top-10 finish in three starts on road courses in 2020. He remains seventh in the NXS point standings.

Firing off from the 17th position, Allgaier took good care of his Camaro, steadily gaining positions while adjusting to the new track. By lap 3 he had worked his way up to ninth and radioed that he needed more forward drive, but that the balance and brakes were good. He was scored in the fourth position when the first caution of the race came out late in the stage. Under the yellow, crew chief Jason Burdett called Allgaier in for fresh tires and fuel for the BRANDT Camaro.

The JRM driver restarted in ninth and battled his way to sixth before the green-and-white checkered flag waved to end Stage One.

Staying out under the stage-ending caution, Allgaier started the second stage in fourth and was battling hard for position when a quick caution came out before the field could complete a lap under green. Allgaier was concerned that he had flat spotted his tires, so the team opted to bring the No. 7 Camaro to pit road for four tires and fuel.

After the 34-year-old driver returned to the track, Burdett relayed that they had made a good call as the team had discovered a pretty good flat spot on one of his tires. Allgaier restarted in 21st on lap 19 and maneuvered his way to ninth before Stage Two concluded on lap 30. The team called Allgaier back to pit road under the stage-ending caution for four tires and fuel.

Allgaier lined up for the final stage from the 11th position on lap 32 and methodically moved his way forward into the seventh position by lap 41. Just two laps later the caution came out, giving the team an opportunity to make their final pit stop of the day for four fresh tires and fuel. Allgaier restarted in the ninth position after some cars opted to stay out and navigated his way up to third, avoiding big chaos in Turn 1 that brought out a caution.

The field went back to green with five laps to go and Allgaier was still running in the third position when contact with the No. 16 sent him for a spin with three laps remaining in the race. Allgaier was able to avoid damage to his BRANDT Camaro and continued on, rebounding to score a ninth-place finish.

“I’m really proud of everyone on this BRANDT Professional Agriculture team. The guys did a really good job and made big gains all day. The pit crew did a great job getting track position. The spotters did awesome just getting me into the right spots. It’s not the first time AJ’s (AJ Allmendinger) wrecked me and it’s hard when the same person wrecks you over and over again. We’ll move on to Dover next week and keep digging.”