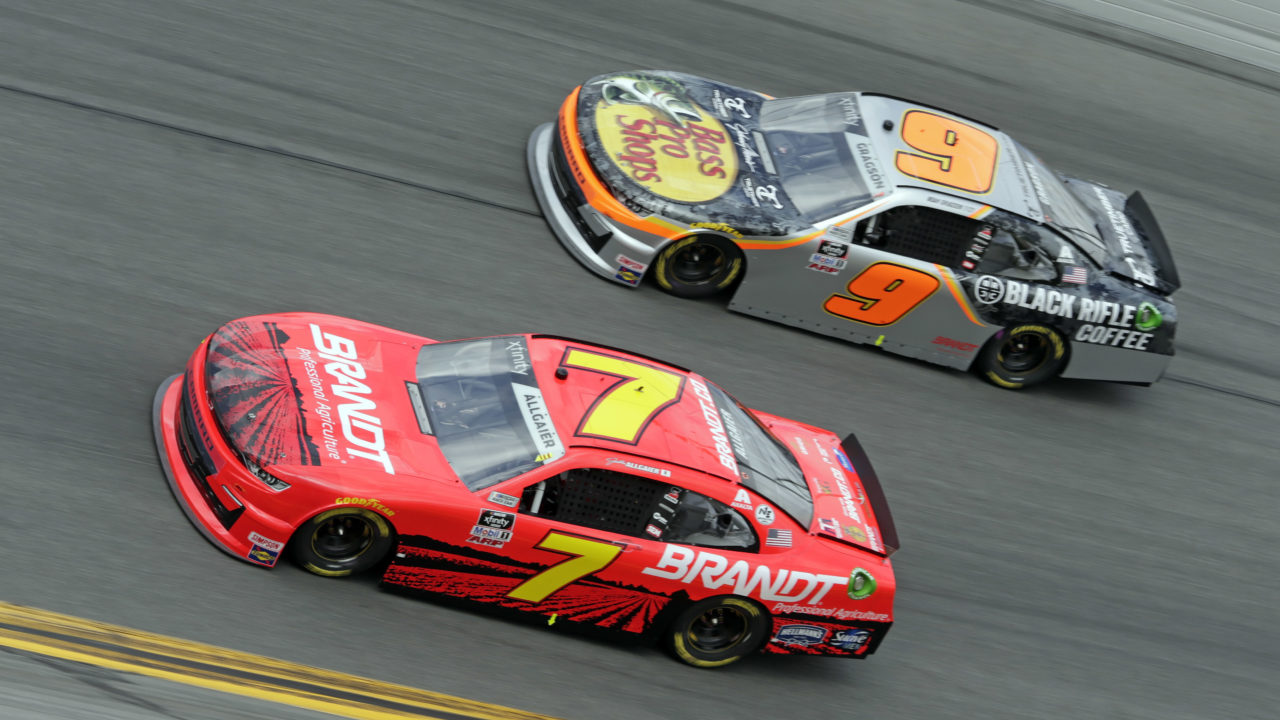 Justin Allgaier had a promising start to Saturday’s NASCAR Racing Experience 300 at Daytona International Speedway, leading 23 laps and winning the second stage. However, a late-race wreck caused too much damage to his BRANDT Professional Agriculture Camaro and forced him to retire from the race with less than 15 laps to go. Allgaier was scored with a 30th-place finish and currently sits 13thin the NASCAR Xfinity Series point standings after the opening race of the season, just 24 points outside the lead.

The 33-year-old driver qualified 13th for the 120-lap race and began working with his teammates early to try to get to the front. He was running in the fifth position when the first caution of the race came out on lap 19 and crew chief Jason Burdett called the driver in for four tires, fuel and adjustments. With some cars opting to stay out, Allgaier restarted in 20th on lap 24. He wasted little time using the draft to get back inside the top 10 and continued to work with his teammates in the closing laps to give JR Motorsports a first-fourth finish to end Stage One. Allgaier took the green-and-white checkered flag in third.

While many teams opted to come to pit road, Allgaier and the BRANDT crew decided to stay out and start the second stage from the point position on lap 36. He maintained the lead at the drop of the green flag, but lost the position before a caution came out on lap 38. He restarted in second on the bottom line and lost ground to start, but got a good run with help from the cars behind him to retake the lead on lap 45. Allgaier held off the field for the remainder of the stage, making blocks in the closing laps to win Stage Two and earn a coveted playoff point. Under the stage-ending caution, Allgaier came to pit road for four tires and more fuel.

Allgaier took the green flag for the final stage in the sixth position on lap 67 and continued to race inside the top 10. Needing to pit one more time for fuel to make it to the end of the race, the JRM driver joined much of the field in pitting under the green flag within the same couple laps near lap 82. Allgaier rejoined the field after his stop in the 20th position and had worked his way up to 17thby lap 88. Due to varying pit strategies, there were multiple packs of cars on the track. With the final cars finally hitting pit road, Allgaier found himself in seventh, a little more than nine seconds behind the leader. He tried his best to rejoin the lead pack, but when the No. 51 slowed just ahead of Allgaier after another car spun, the driver of the No. 7 Camaro had nowhere to go and slammed into the back of the No. 51, causing severe damage to the BRANDT Camaro. Allgaier limped the No. 7 Chevy back to the garage and his day was done. He was relegated to a 30th-place finish after a strong start in the season-opening event.

“I saw the car spinning up in front of us and at that point, I knew we had a big pack of cars behind us and the last thing we needed to do was jump on the brakes immediately because I knew those guys were going to be right there and I didn’t want to get myself wrecked. Unfortunately by time everybody dispersed enough to be able to put on the brakes, Jeremy (Clements) was already slowed more than we were. With the No. 11 to my inside, at that point there was nowhere to go. It’s just a shame. A terrible way to end Speedweeks. Obviously to get the stage win was huge and to run as well as we had all day in our BRANDT Professional Agriculture Camaro was good. It was just a disappointing ending to a decent day.”