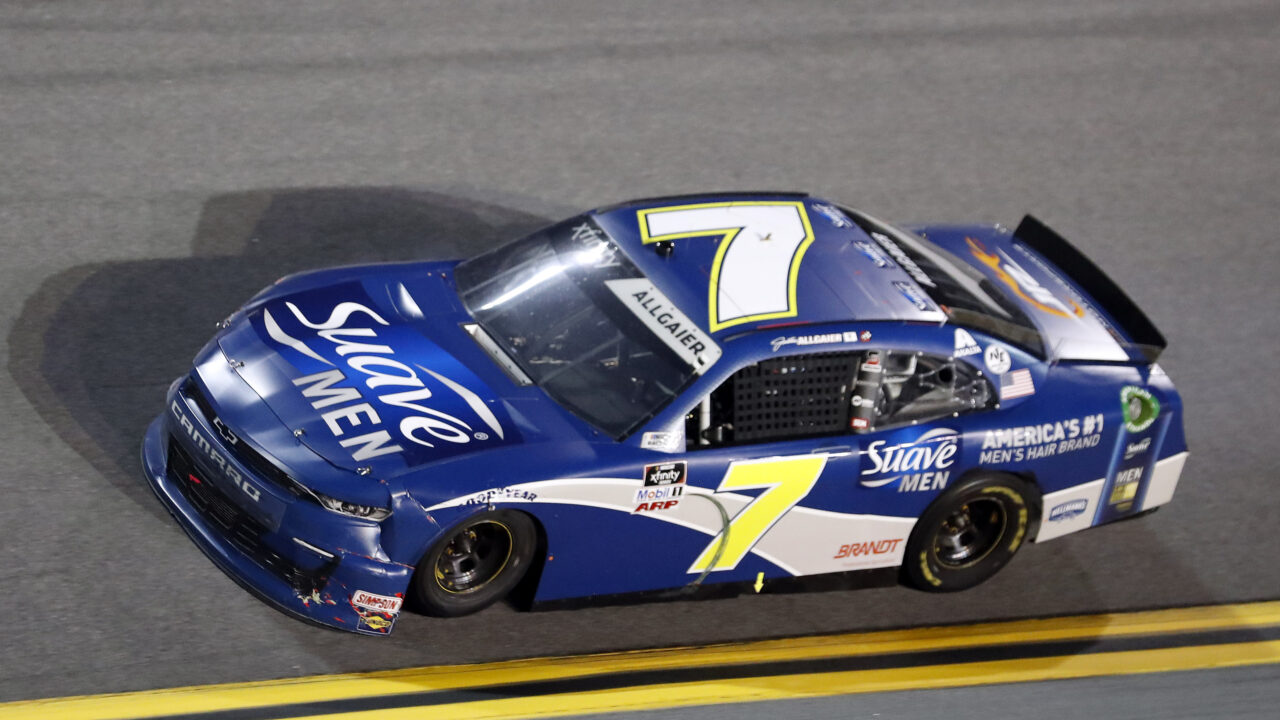 It was a tough night for Justin Allgaier and the No. 7 Suave Men team in Friday’s NASCAR Xfinity Series race at Daytona International Speedway. The veteran driver was caught up in a multi-car wreck in Stage Two and after the team repaired much of the damage sustained to the No. 7 Suave Men Camaro, a flat left-rear tire back under the green flag caused the Chevrolet to spin, triggering another multi-car incident. This time the damage sustained to the Suave Men Camaro was too severe to continue and Allgaier was ultimately scored with a 29th-place finish.

Allgaier rolled off the grid fifth for the 100-lap race and quickly connected with his JR Motorsports teammates inside the draft. The 34-year-old driver was scored in the 10th position when the second caution of the race came out on lap 14. Under the yellow, crew chief Jason Burdett called Allgaier in for four tires, fuel and a chassis adjustment to improve the Suave Men Camaro’s handling.

With some cars opting not to pit, the Illinois native restarted back in 21st. It didn’t take him long to get in line with his teammates once again and they continued to work together as best they could for the remainder of the stage. When the green-and-white checkered waved on lap 30, Allgaier was in the eighth position.

During the stage break, Burdett radioed for Allgaier to bring the Suave Men Chevy to pit road for left-side tires and fuel to prepare for the second stage. The JRM driver lined up 12th for Stage Two on lap 34 and swiftly gravitated towards his teammates. They were working together when cars ahead of them began to wreck. The JRM drivers had nowhere to go and all four were caught up in the incident.

Allgaier’s Camaro sustained front-end damage, but he was able to make it to pit road for repairs. The team made multiple stops under the caution and got him back out in time for the restart. Allgaier continued to battle out on the track, but a flat left-rear tire sent Allgaier’s Suave Men Chevy spinning, triggering another multi-car wreck. The No. 7 Camaro suffered heavy damage that was too severe for repairs, causing an early end to Allgaier’s night on lap 46. He was ultimately scored with a 29th-place finish.

Last weekend’s victory at Dover International Speedway locked Allgaier into the NXS Playoffs. He is currently seventh in the series standings.

“Getting into Turn 3, the left rear, I felt it go down. It kind of swung the car to left and at that point you’re just a passenger. It’s really disappointing because obviously we got damage on the caution before that, but right there it just went around. What’s really odd is there was no damage to the left rear on that caution before. I’m just really disappointed for everyone with Suave Men and all the folks at JR Motorsports and I hate it for all the other cars that caught up in that. These restrictor-plate races are extremely difficult and we have another one coming up in the playoffs, so hopefully we can go there and get a better result.”