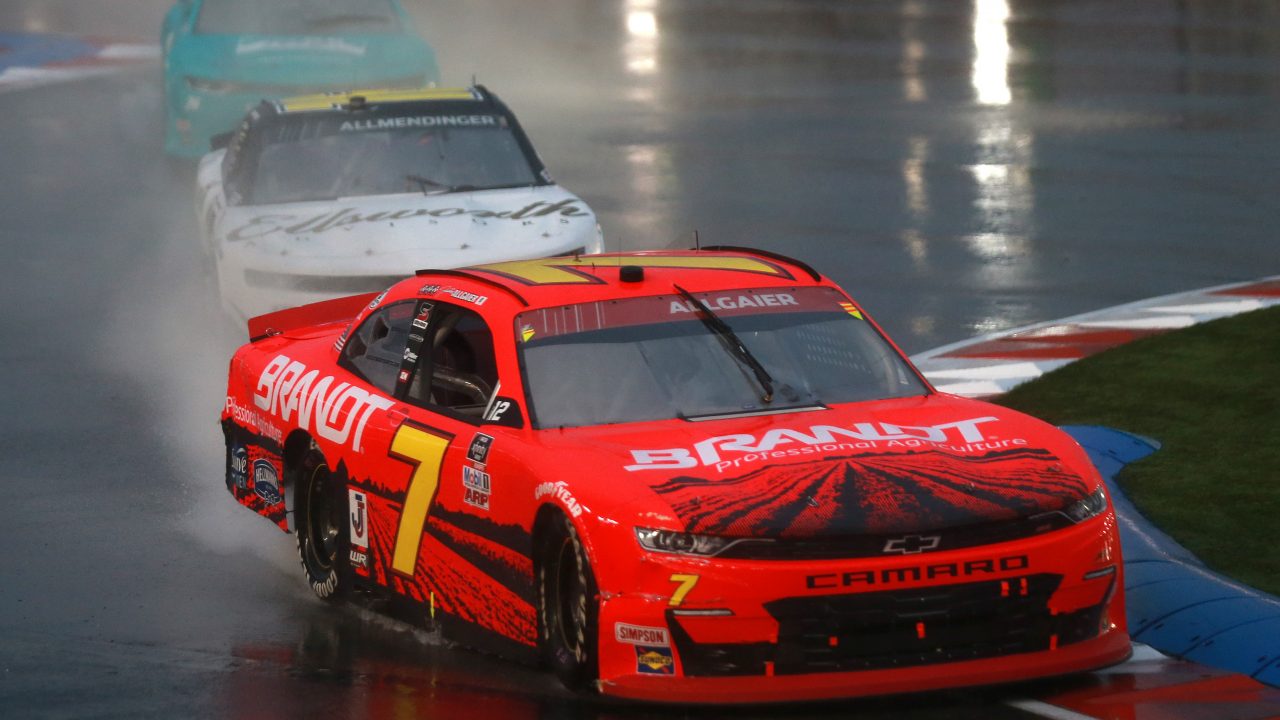 Justin Allgaier, driver of the No. 7 BRANDT Professional Agriculture Camaro, advanced to the Round of 8 after surviving an eventful cutoff race for the NASCAR Xfinity Series Playoffs at the Roval at Charlotte Motor Speedway that was plagued with heavy rain. Allgaier was scored with a 23rd-place finish after earning valuable points in the opening two stages of the race. He’ll head to Kansas next weekend third in the NXS Playoff standings.

The Illinois native rolled off 10th for the 67-lap event and quickly advanced his position to eighth before the first caution of the race on lap 3. During the yellow flag, rain started to pick up at the track so Allgaier joined the rest of the field in coming to pit road for specially-designed weather tires. Allgaier restarted sixth and cautiously worked his way through the turns of the Roval in the rain. He reported to his team just prior to a lap 14 caution period that visibility was starting to become an issue. Scored seventh at the time of the caution, Allgaier stayed out on the track to restart sixth with just two laps remaining in Stage One. Navigating his way through the twists and turns of the rain-soaked track, Allgaier was able to pass one more car to end Stage One in the fifth position.

Prior to the start of Stage Two, Allgaier brought the BRANDT Camaro to pit road for a fresh set of rain tires and fuel. He took the green flag for the second stage in 14th on lap 23 and advanced his position to fourth before a yellow flag waved on lap 27. While under the caution, it was deemed that there was too much standing water on the track, so NASCAR threw the red flag while crews worked to get the track back to suitable racing condition.

After a nearly 40-minute delay, the race finally got back underway on lap 33. With rain still falling on the track, Allgaier restarted from the fourth position and was battling for the lead when he spun on the slick racing surface. The BRANDT Camaro didn’t suffer significant damage, so Allgaier was able to continue on. With several other cars having issues during that lap, the caution flag was displayed, giving the No. 7 team the opportunity to head to pit road to look over the BRANDT Camaro and pack it full of fuel. The JR Motorsports driver restarted deep in the field on lap 36 and drove his way inside the top 15 before the yellow flag waved once again. Restarting 13th with just one lap left in the stage, Allgaier made quick work of the cars ahead of him to advance his position to eighth before the green-and-white checkered flag waved.

Opting to stay out during the stage break, Allgaier lined up for the start of the final stage in the fifth position on lap 42. He was running in that same spot when a caution came out on lap 49. Restarting inside the top five, Allgaier continued to race smart and think about the big picture of advancing to the next round of the playoffs. He was scored in the fourth position after another caution flag was displayed on lap 60. Back under green, Allgaier continued to battle inside the top five but missed the backstretch chicane and was forced to serve a stop and go penalty. In the process of the serving the penalty, Allgaier’s Camaro made contact with another car, causing damage and a flat left front tire. Luckily an opportune caution came out for the team and Allgaier was able to nurse the No. 7 Chevy to pit road for four tires and fuel.

Once again restarting deep in the field after the race was sent into overtime, Allgaier fought through the increasingly adverse weather conditions to take the checkered flag in the 23rd position.

“Today was hands down one of the toughest, craziest races of my career. There was so much water on the track and it was so tough to see anything. The spotters did an awesome job trying to direct us as best as they could. I thought we were going to bring home a top-five finish with our BRANDT Professional Agriculture Camaro. Unfortunately, at the end there, I missed the backstretch chicane and we had to serve a penalty and things kind of went downhill from there. Thankfully we were still in good position to be able to advance to the next round of these playoffs. I’m glad this race is behind us. I’m ready to get to Kansas.”