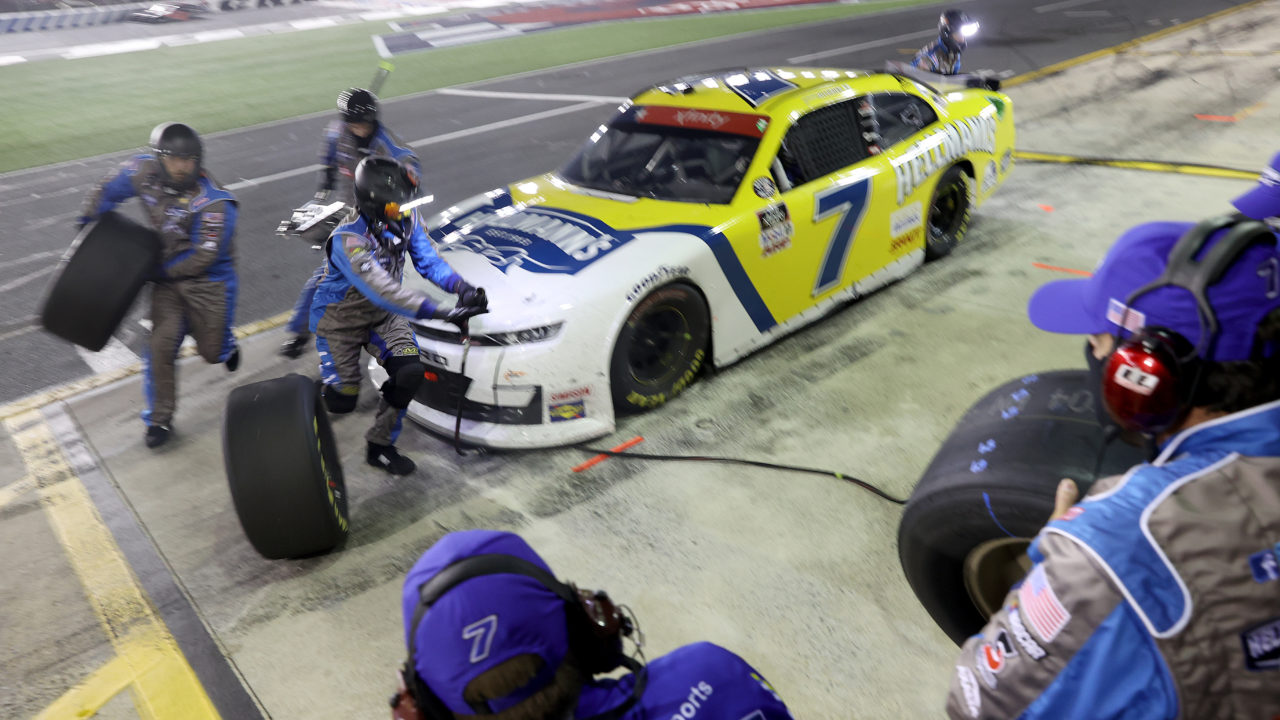 Justin Allgaier, driver of the No. 7 Hellmann’s Camaro, overcame a race full of adversity to cross the line with a fifth-place finish in the Alsco 300 at Charlotte Motor Speedway on Monday night. It was his second consecutive top-five finish on the 1.5-mile track. Allgaier currently sits sixth in the NASCAR Xfinity Series point standings, just 33 points behind the leader.

Allgaier fired off in the fourth position after the field was set by random draw. He was running in the seventh position when the first caution of the race came out on lap 4. Under the yellow, the Illinois native reported that his gauges were going haywire. He restarted in seventh and continued to lose position on the track. He was running in 10th when a caution came out on lap 29. The team called him to pit road for a wedge adjustment and to work on fixing the gauges on the No. 7 Camaro. He restarted in 29th on lap 33 and raced his way up to 17th before the green-and-white checkered flag waved to end the first stage on lap 45. Under the stage-ending caution the team made multiple adjustments and continued to try to fix the issues Allgaier was having with the dash, but they were unable to get the gauges working again.

The driver of the Hellmann’s Camaro took the green flag for Stage Two in 27th and started his march forward. He was up to 15th by lap 58 and reported that the No. 7 Chevy was lacking side bite. Still he battled through the tough-handling condition and raced his way to 13th before the end of Stage Two on lap 90. Crew chief Jason Burdett called Allgaier to pit road for four tires, fuel and an adjustment under the stage-ending caution.

Allgaier fired off 13thfor the final stage and worked his way up to ninth before green-flag pit stops were underway around lap 147. Without having working gauges, the JR Motorsports driver took it easy going down pit road for his stop for four tires and fuel to avoid getting a pit road penalty. He exited pit road in the 11thposition, but was caught a lap down when a caution came out before green-flag pit stops had cycled through for the field. Allgaier took the wave around and restarted 11th on lap 163. When another yellow flag waved on lap 171, the 33-year-old driver came back down pit road for fresh tires and fuel.

Restarting in 11th on lap 176, Allgaier continued to battle for position. He was inside the top 10 when another caution came out and then cut a tire on the subsequent restart with 12 laps to go. Allgaier made his way to pit road for right-side tires and was stuck a lap down, but the team caught a break when the caution came out and they were given the free pass. The race came down to a green-white-checkered finish and Allgaier powered his way to fifth before the checkered flag waved.

“This has to be the hardest fought top-five finish we’ve ever had. Hats off to this team. We overcame a lot in this 300 miles and to come home with a fifth-place finish is just awesome. When we had to come to pit road under green with that flat tire I didn’t think we were ever going to come back from that, but we did. I’m so proud of this Hellmann’s team. I can’t wait to get to Bristol on Saturday and continue this positive momentum.”