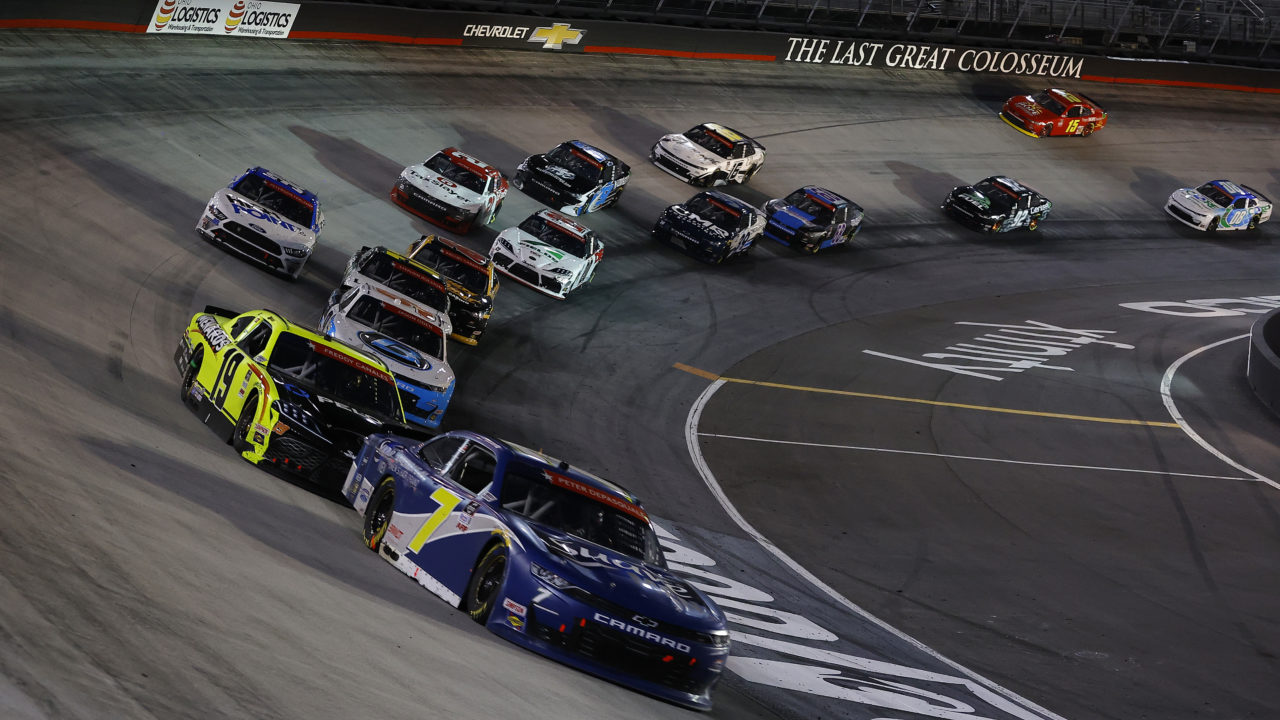 After having a dominant car on Monday night, bad luck struck once again for Justin Allgaier and the Suave Men team at Bristol Motor Speedway in the Cheddar’s 300. The Illinois native led over 150 laps and won Stage Two, but a late-race battle for the lead with teammate Noah Gragson resulted in Allgaier making contact with the wall and badly damaging his No. 7 Chevrolet Camaro. As a result of the damage, Allgaier was relegated to an 18th-place finish.

Allgaier now has four stage wins this season, the most among NASCAR Xfinity Series drivers, and has moved up to fourth in the NXS point standings, just 44 markers behind the leader.

Rolling off the grid in the 10thposition, Allgaier made slight contact with the wall on lap 1, but avoided major damage to his Suave Man Camaro. The JR Motorsports driver restarted in the ninth position after a caution came out for a two-car wreck on lap 6 and raced his way up to sixth before the lap 35 competition caution.

He reported under the yellow flag that the Suave Men Chevy was good on entry, tight center and was lacking right-rear security. Restarting in fifth on lap 43, he continued to battle inside the top five for much of the remainder of the stage, taking the green-and-white checkered flag in the second position on lap 85. Under the stage-ending caution, crew chief Jason Burdett called Allgaier to pit road for four tires, fuel and an air-pressure adjustment.

Taking the green flag for Stage Two in the third position, Allgaier got stuck behind a slower car ahead of him and dropped a few positions, but was able to rebound to fourth before a caution flag waved on lap 103. He restarted inside the top five and was running in second when another yellow flag was displayed. Allgaier got a good run on the lap 129 restart and powered his way to the lead for the first time of the race.

The 33-year-old driver was still running point when the caution flag came out yet again on lap 141. Fluid on the track put the field under the red flag, but once the race was back underway, Allgaier retook command of the race. He drove on to win Stage Two, his fourth stage win of the season.

After pitting for four fresh tires and fuel, Allgaier lined up second for the start of the final stage after a car opted to stayed out. When the green flag waved, Allgaier raced his way back to the top spot in a hurry. He continued to pace the field until the caution came out with 53 laps to go. The team took the opportunity to put on their last set of tires, but lost the battle off of pit road to a car that only took two tires.

Allgaier retook the lead on the restart with 45 laps to go, but yet another quick caution came out, setting up another restart with 37 laps to go. He held point once the field was back under green and had a solid lead with 13 laps to go when the 11th yellow flag of the night waved for an incident on the track.

Allgaier lined up beside fellow JRM driver Gragson for the restart and the two dueled for the lead with less than 10 laps to go. Their Camaros made contact and Allgaier was sent up into the wall and spun down the track, making contact with the inside retaining wall. Allgaier limped the damaged Suave Men Chevy to pit road, but his race was done and he ended the night with an 18th-place finish.

“Tonight definitely stung. I thought we finally had one going our way. The guys did such a great job preparing this Suave Men Camaro and did a great job getting us track position we needed. That’s not the way we wanted to end our night, but we’ll go get them next week at Atlanta. This team never quits.”