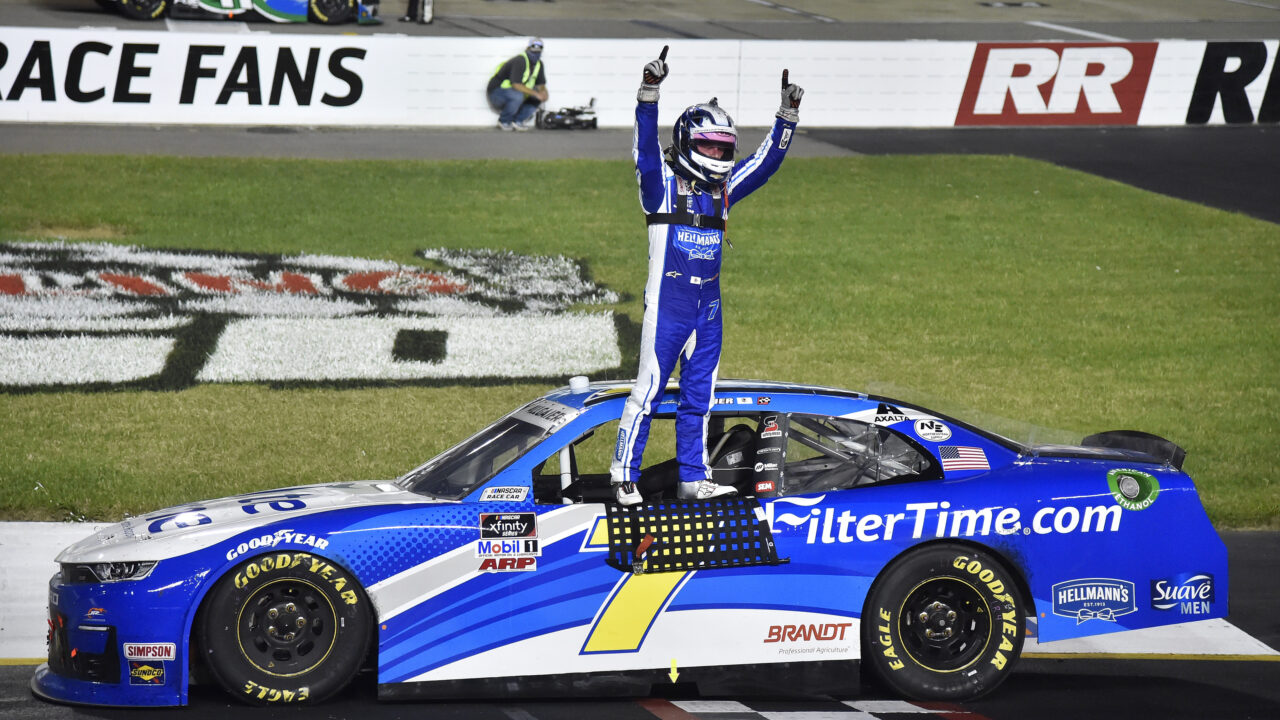 Allgaier Gets the Victory in Friday's Richmond Event

Justin Allgaier, driver of the No. 7 FilterTime Camaro, proved to have the fastest car on Friday night, leading 78 laps on the way to his second victory of the season in the Go Bowling 250 at Richmond Raceway. The win was the 50th for JR Motorsports as an organization and the 10th for Allgaier since he joined the team in 2016. In all, the 34-year-old driver has 13 career NASCAR Xfinity Series victories.

Allgaier rolled off 16th for the 250-lap race and drove up to 10th before the first caution of the night came out on lap 16. Under the yellow, the JRM driver reported that the FilterTime Camaro needed more center turn and was a little free in. Opting to stay out on the track, Allgaier chose the inside line and restarted in the 11th position. Dropping back some positions, Allgaier relayed that he’d lost right-front grip and had no turn in the center.

When the competition caution came out on lap 40, the Illinois native was scored in the 15th position. Crew chief Jason Burdett called him to pit road for four tires and fuel and a chassis adjustment to help with the No. 7 Camaro’s handling. He restarted in 12th on lap 45, but suffered a little bit of damage to the front of the FilterTime Chevy after cars ahead of him stacked up. The caution came out for a separate incident that same lap, so spotter Eddie D’Hondt was able to survey the damage and let the team know it was minimal.

Back under green, Allgaier finally had an opportunity to see what his Camaro could do after the team had made the earlier chassis adjustment. He drove from 15th to eighth in less than 10 laps and continued his climb, racing into the top five and taking the green-and-white checkered flag to end Stage One in fifth.

Burdett called Allgaier in during the stage break for four tires, fuel and an air-pressure adjustment to prepare for the second stage of the night. A fast stop allowed Allgaier to gain a position on pit road, lining him up for the start of Stage Two in the fourth position on lap 83. He wasted little time taking over the third position after the green flag dropped and quickly reported that he was happy with the FilterTime Camaro’s handling.

By lap 96 he had taken over the runner-up spot and set his sights on the leader. Allgaier continued to close in on the No. 22 of Austin Cindric, making the pass for the lead on lap 125. Allgaier remained out front until the green-and-white checkered flag waved to secure his ninth stage win of the year.

With the second stage going caution free, the No. 7 team was prepared for there to be another long green-flag run in the final stage. Allgaier came in for a pit stop for four tires and fuel and won the battle off of pit road to take command of the start of the last stage of the race. He led early in the run, but wanted to take care of the tires on his Chevy, so opted to let the No. 11 of Justin Haley make the pass for the top spot on lap 174.

Allgaier settled into the second position as a long-green flag run ensued. The JRM driver waited for the right time to make his move. With less than 50 laps to go, Allgaier began closing the gap on the leader. Allgaier made the pass on lap 222 and the two drivers continued to battle for a few laps, but ultimately the driver of the No. 7 Camaro was able to pull away and drive on to the victory.

The win was his first at Richmond Raceway and the 13th NXS victory of his career. The victory also makes Allgaier the winningest driver in JRM history with 10th wins since joining the organization in 2016.

“I feel like we’ve let so many get away here at Richmond and just haven’t been able to seal the deal, until tonight. It’s been so frustrating, but I’m proud of these guys and proud of the effort tonight. The pit stops were amazing. Everybody at JR Motorsports, they built a fantastic Camaro. A huge thank you to all of our partners. We’ve got BRANDT Professional Agriculture on the car tomorrow and FilterTime on tonight. Everybody on our program right now is doing just a fantastic job. I can’t be more excited to get back at it tomorrow.”