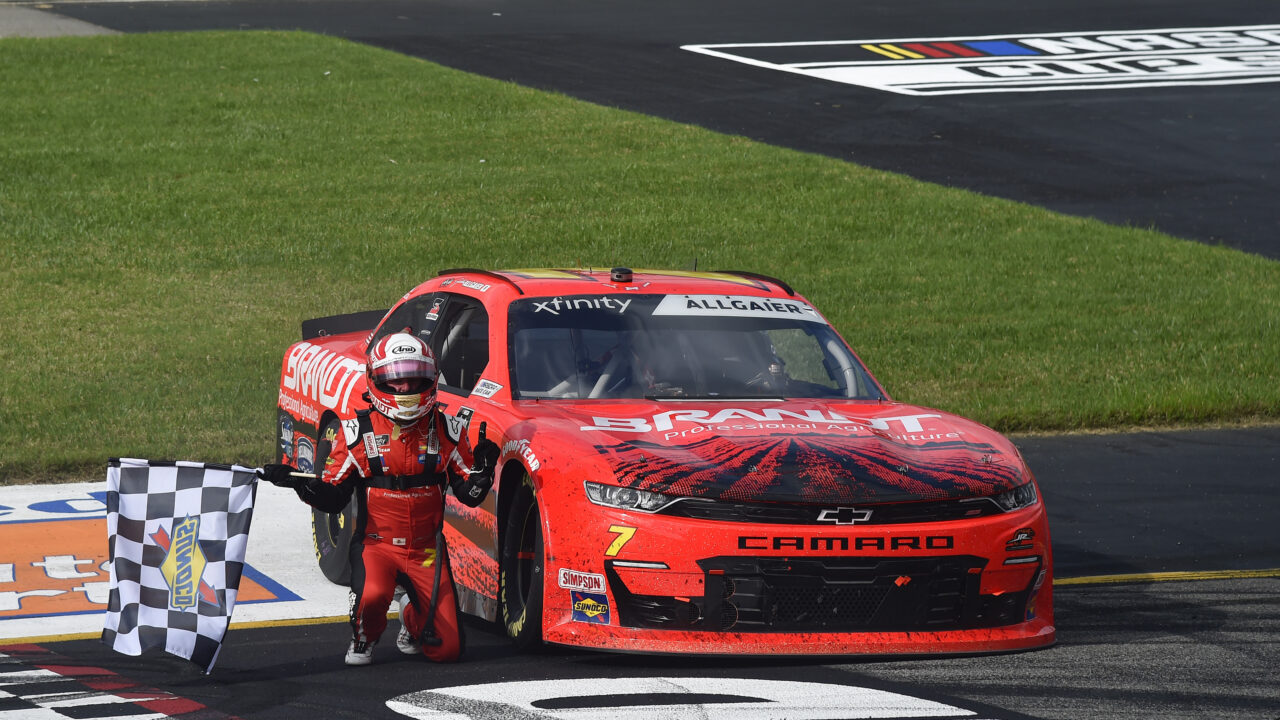 Justin Allgaier swept the weekend doubleheader at Richmond Raceway, scoring the first back-to-back victories of his NASCAR Xfinity Series career after taking the checkered flag in Saturday afternoon’s Virginia is for Racing Lovers 250. Allgaier led a race-high 135 laps in his No. 7 BRANDT Professional Agriculture Camaro en route to the 14th win of his NXS career and third of the 2020 season.

After scoring the victory in the opening night of the weekend doubleheader in Richmond, Allgaier rolled off 14th due to an invert of the top portion of the field. The Illinois native wasted little time though once the green flag dropped, driving into the top 10 by lap 20 and up to second by the lap-40 competition caution. Under the caution, Allgaier reported that he just needed the BRANDT Camaro to rotate the center a little better. The team opted to stay out along with most of the field.

Restarting in the second position on lap 45, Allgaier powered his way to the lead in a hurry and held point until the green-and-white checkered flag waved to end Stage One on lap 75. The stage win was his 10th of the season.

During the stage break, crew chief Jason Burdett called Allgaier in for four tires, fuel and chassis adjustment to help with center rotation. A fast pit stop allowed Allgaier to win the race off of pit road. He lined up in the top spot for the start of the second stage on lap 82, but didn’t put up a fight when the No. 10 of Ross Chastain made a pass for the lead in an effort to save his tires for later in the run. Allgaier settled into the second position and patiently waited until it was time to make a move.

The 34-year-old driver retook command of the race on lap 128 and stayed out front until a caution came out on lap 139. Burdett made the decision to have Allgaier stay out on the track to conserve tires for the final stage while some teams opted to pit. He lined up for the restart in the top spot and battled hard in the closing laps, doing his best to fend off the cars on fresh tires. When the flag waved to signal the end of Stage Two, he was scored in the eighth position.

Under the stage-ending caution, Allgaier took the opportunity to take four fresh tires and fuel. He started the final stage from the 11th position on lap 157, but didn’t let the loss of track position deter him. By lap 163 he had pressed his way to second and less than 10 laps later made the pass for the lead. Allgaier put on a dominating performance from there, continuing to distance himself from the rest of the field as the run went on. The JR Motorsports driver was nearly eight seconds ahead of second place when a caution came out on lap 229 of the 250-lap event.

Allgaier brought his Camaro to pit road during this caution period for four tires and fuel and again won the race off of pit road. On the restart, Allgaier was able to hold off the competition, driving on to earn his second victory of the weekend.

The victory was the 51st for JR Motorsports in NXS competition. Allgaier is now third in the projected playoff standings with just one race left in the regular season.

“We caused a party today! Man, it was awesome to get BRANDT Professional Agriculture back to Victory Lane. I knew we had speed and knew that when we needed to go, we could. I’m just proud of these guys. I put us behind the eight ball. We had to change the nose last night. I stayed here with them until the garage closed just trying to help them get it all fixed. The amount of time and effort that’s gone into this weekend is really special. This team did a fantastic job all weekend long.”