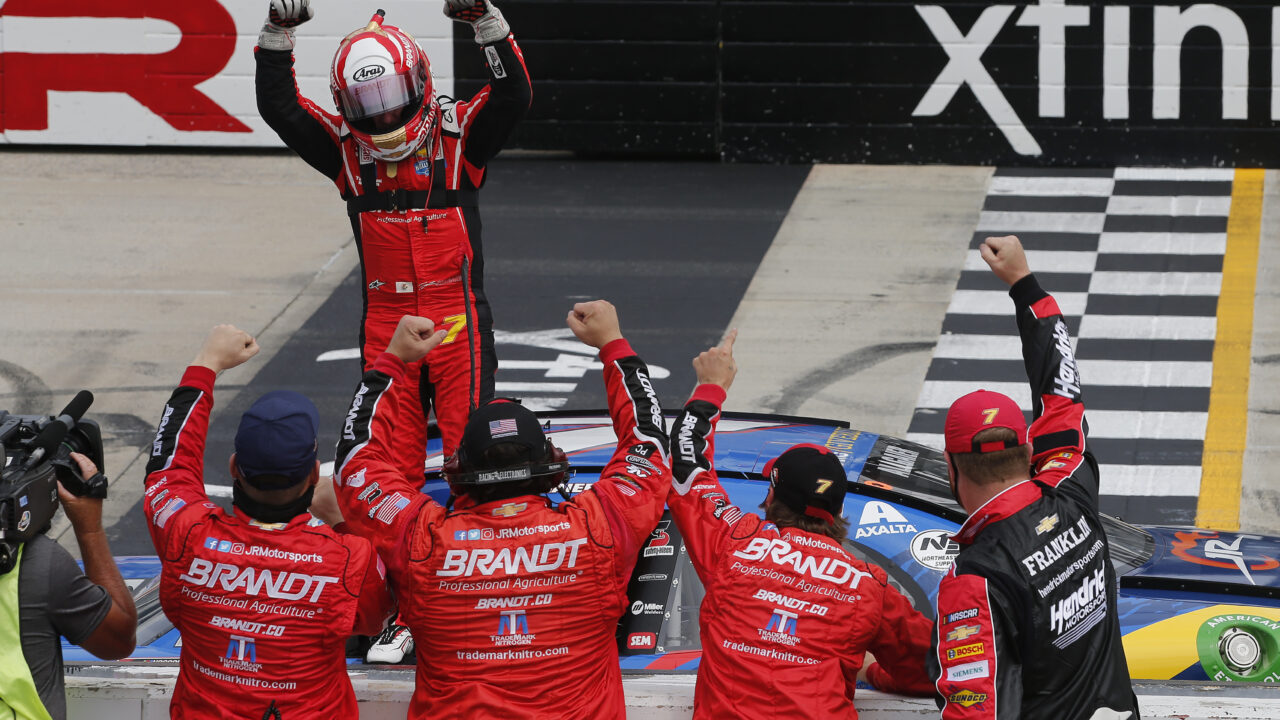 Allgaier Cruises to Victory at Dover

Justin Allgaier, driver of the No. 7 FFA Chevrolet, powered his way to his first victory of the season in Saturday’s Drydene 200 at Dover International Speedway. He led 120 laps en route to his second NASCAR Xfinity Series win at the Monster Mile. The 34-year-old driver now has 12 career NXS victories to his name, with nine of those coming since he joined JR Motorsports in 2016. Saturday’s dominating win catapulted him to fifth in the series standings and locked him into the 2020 NXS Playoffs.

Allgaier fired off fifth for the 200-lap race and was running in the same position when the competition caution waved at lap 20. He used the newly-implemented choose cone to restart in the outside line, giving him an advantage that helped him drive up to third in a hurry. Allgaier continued to race in third for the remainder of the first stage, claiming eight stage points at its conclusion at lap 45. Under the stage-ending caution, crew chief Jason Burdett called Allgaier to pit road for four tires, fuel and a chassis adjustment to fine-tune the No. 7 FFA Camaro’s handling.

The JRM driver once again chose to line up in the preferred outside lane for the start of Stage Two on lap 52. He battled his way to second and as his car continued to come to him, he reeled in the leader, teammate Noah Gragson, ultimately taking the point position for the first time in the race on lap 76.

Just one lap later, the caution flag waved for an incident on the track. Allgaier reported under the caution that the FFA Chevy lost a little front grip during that run. The team opted not to pit under the caution and Allgaier restarted from the top spot on lap 82. The veteran driver maintained the lead for the remainder of Stage Two, driving to his eighth stage win of the season and earning an extremely valuable playoff point.

During the stage break, the team called Allgaier in for four tires, fuel and adjustments. A fast stop allowed him to win the battle off pit road, but with some cars staying out, Allgaier lined up fourth for the final stage. The loss of track position didn’t deter him though as he once again found himself in the lead by the end of the first green-flag lap of the final stage. Allgaier radioed to the crew that the FFA Chevrolet fired off incredible as he continued to pace the field.

A long green-flag run ensued, causing the handling to start to fade on the No. 7 Camaro just as an on-track incident brought out the caution on lap 150. Under the yellow flag, the team called Allgaier in for their final pit stop of the day for fresh tires and fuel. Another speedy stop by the pit crew gave Allgaier the top spot for the restart.

The Illinois native once again took command of the race when the green flag waved and made sure to hit his marks in the closing laps. He maintained the lead through one final caution, holding on to the top spot for the final 33-lap run and charging his way to his second victory at the 1-mile oval.

The win was the 49th victory for JR Motorsports and Allgaier’s first of the 2020 season. He’ll look to make it back-to-back victories during Sunday’s second race of the doubleheader weekend for the NASCAR Xfinity Series.

“God is great. These last 18 to 24 months have been crazy. I’m just proud of these guys and the no-give-up attitude they have. This team is incredible. To have FFA on the car today and to get them to Victory Lane in their first primary race is really cool. BRANDT Professional Agriculture, a huge shout out to them for making this happen, and to all of our partners at JR Motorsports. What a day and what a racecar. We were off a little bit in the beginning and Jason (Burdett, crew chief) did a great job at getting us where we needed to be at. The pit crew was lights out all day. We’re firing at the right time and I’m ready to do this again tomorrow.”