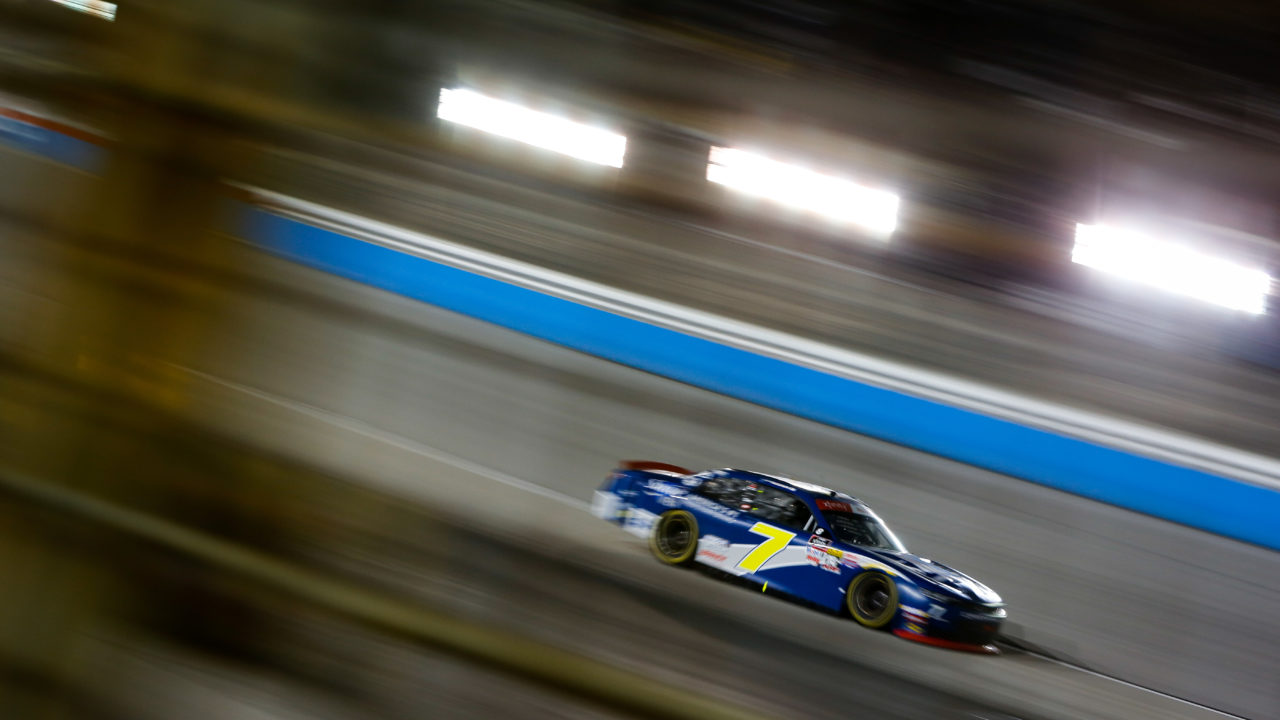 Justin Allgaier and the Suave Men team rallied to a sixth-place finish at Texas Motor Speedway after having to start at the rear of the field in Saturday’s race. The effort was Allgaier’s 15thconsecutive top-10 finish dating back to Kentucky in July. The JR Motorsports driver earned points in each stage, allowing him to remain in the fourth position in the NASCAR Xfinity Series Playoffs, 18 points above the cutoff line with one race remaining before the field is narrowed down to the Championship 4.

Allgaier qualified sixth for the 200-lap race, but had to start at the back due to an engine change after Friday’s practice sessions. The Illinois native fired off strong from the drop of the green flag determined to get inside the top 10 before the end of the first stage to collect coveted stage points. Allgaier was up to 13th when the first caution flag of the day waved on lap 19. Under the yellow, he reported that the Suave Men Camaro could use more rear lateral grip in Turns 3 and 4 and was tight through the center of Turns 1 and 2. The team opted to stay out and restart in the 12th position on lap 26 and Allgaier was able to advance his position to ninth by time the green-and-white checkered flag waved to end Stage One on lap 45.

Under the stage-ending caution, crew chief Jason Burdett called Allgaier to pit road for four tires, fuel, and adjustments to try to improve the handling of the Suave Men Camaro. Allgaier took the green flag for Stage Two from the ninth spot on lap 53 and steadily improve his position, running in fifth when a caution came out on lap 79. He stayed out on the track while some cars decided to pit and restarted in third, working his way to up second before the end of Stage Two on lap 90.

The team made a fast stop for four tires and fuel and Allgaier lined up to start the final stage in the 12thposition. He again continued to advance his position when the green flag waved, running in seventh when a caution came out on lap 128. He reported to the team that the Suave Men Camaro was still tight through the middle of Turns 1 and 2, so Burdett called Allgaier to pit road for four fresh tires, fuel and a wedge adjustment. He restarted in eighth and was up to third before yet another yellow flag waved on lap 140. Under the caution, Allgaier came to pit road for a fuel only stop in an effort to try to make it the rest of the race without having to stop again.

Allgaier restarted in seventh on lap 145 and was up to second in a hurry. He was in that same position when a wreck brought out the caution on lap 150. When the race was back underway on lap 157, Allgaier dropped to fourth, but moved back up to third before the final caution of the race came out on lap 161. The team decided to stay out and he continued to race inside the top five following the restart. He was battling for the fourth position when a lapped car interfered, causing the Suave Men Camaro to slide up the track and lose momentum. He continued to fight hard for position in the closing laps, taking the checkered flag in the sixth position. The finish allowed him to remain fourth in the NXS Playoff standings.

Christopher Bell earned the victory, earning a spot in the Championship 4, and was followed by Ross Chastain, with Austin Cindric, Brandon Jones and John Hunter Nemechek rounding out the top five.

“Unfortunately at the end there we just lost some spots. It’s disappointing because I know we had a solid top-five Suave Men Camaro. Hats off to everybody at JR Motorsports and the Hendrick engine department though. To have to change engines and start from the back and then be able to come through the field and battle for the lead there and earn points during the race was really good. It was a solid points day for us, so now we’ll head to Phoenix next week, one of my favorite tracks, and try to lock our way in to Homestead as part of the Championship 4.”