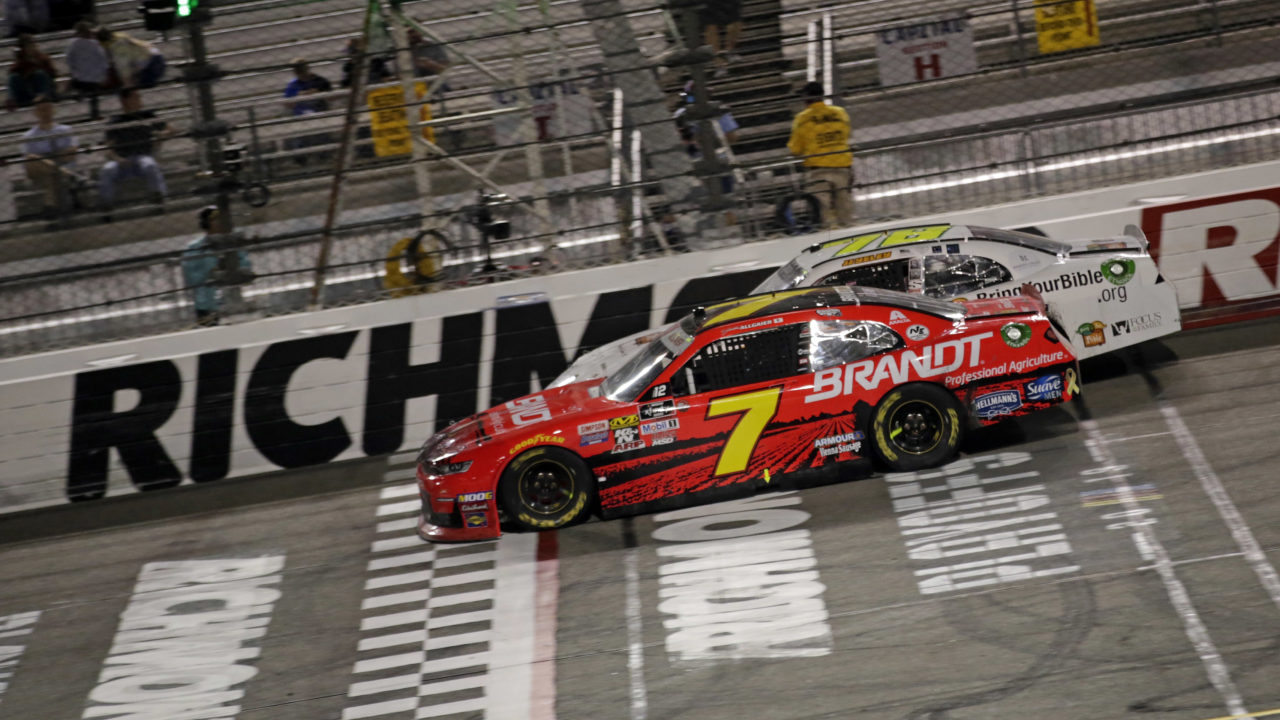 Justin Allgaier and the BRANDT Professional Agriculture team kicked off the NASCAR Xfinity Playoffs with a top-five finish, placing fourth at Richmond Raceway. The Friday night race was the JR Motorsports driver’s 300th career NXS start. Allgaier now sits fifth in the NXS Playoff standings with two races left before the field is narrowed down to eight.

Allgaier qualified second for the 250-lap event, but was forced to start from the back due to having to change a flat tire post-qualifying. Starting deep in the field didn’t stop the 33-year-old driver though, as he began to advance his position at the drop of the green flag. By lap 36, he was up to the 10th position, but shortly after, he reported that the BRANDT Camaro was tight in the center and free on exit. He continued to fight through the tough handling conditions to end the first stage in 10th, collecting a stage point.

Under the stage-ending caution, Allgaier brought the BRANDT Chevy to pit road for four tires, fuel, an air-pressure adjustment and a wedge adjustment. He took the green flag for Stage Two on lap 84 in the eighth position and battled his way to fourth by lap 85. As a long green-flag run ensued, Allgaier tracked down third-place Austin Cindric and worked his way by on lap 127. A few laps later a lapped car ahead of him had a mechanical issue and dropped parts on the track. Allgaier hit a big piece of debris, but no damage was discovered and he was able to continue on to finish Stage Two in the third position, earning more stage points.

Prior to the start of the final stage, the team called Allgaier in for their final stop of the race, giving the BRANDT Camaro four fresh tires, fuel and another round of adjustments. Lining up fourth to begin the last stage on lap 159, Allgaier wasted little time moving up to the third spot. Early into the run, he radioed to the team that the No. 7 Chevy was much tighter through the center of the turns. Allgaier continued to race inside the top five as the final stage went caution-free, coming home with a fourth-place finish in his 300th career NXS start.

Christopher Bell won the first race of the 2019 NXS Playoffs and was followed by Cindric, with Cole Custer, Allgaier and Chase Briscoe rounding out the top five.

“We had a really good BRANDT Professional Agriculture Camaro. Unfortunately at the end there we just didn’t have enough speed to keep up with those guys. It was still a solid day. To come from the back after running over something after qualifying, that was a disappointing way to start but I’m proud that we were able to come home with a top-five finish. Hats off to the guys and everybody back at JR Motorsports. It was a good start to the playoffs.”