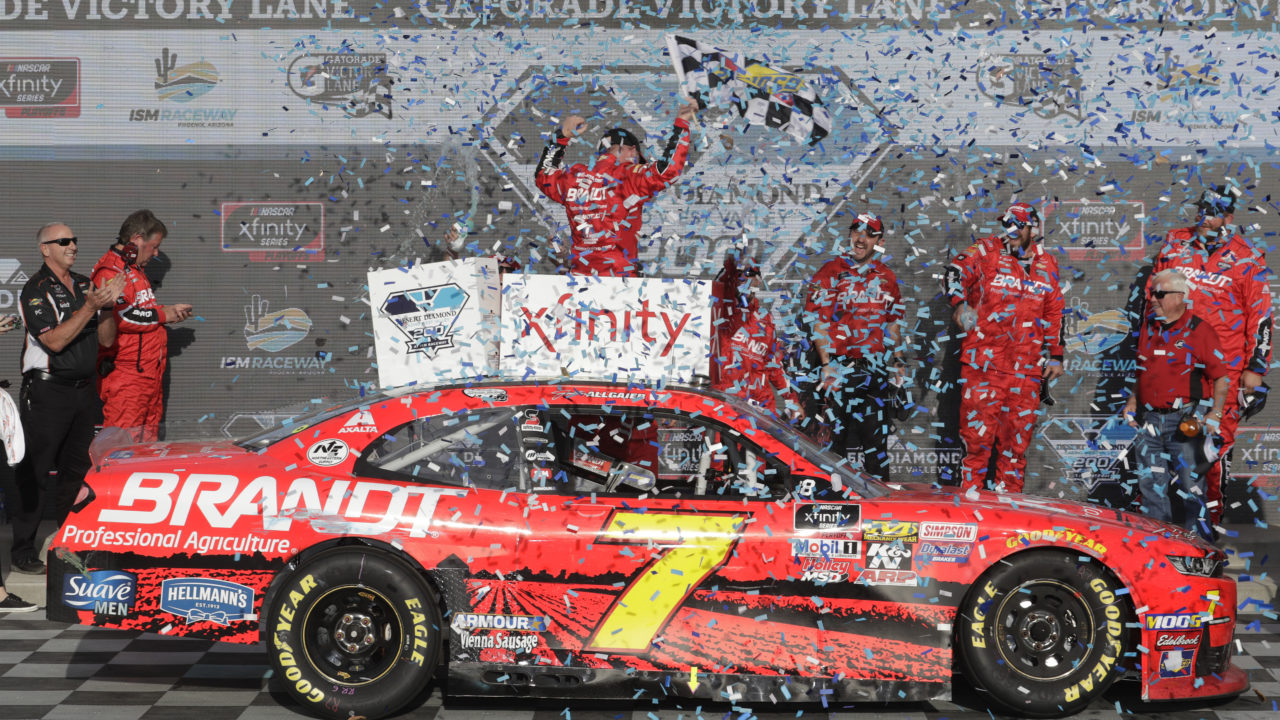 Justin Allgaier, driver of the No. 7 BRANDT Professional Agriculture Camaro, is heading to Homestead-Miami Speedway to battle for the NASCAR Xfinity Series championship after earning the victory in Saturday’s race at ISM Raceway. This marks the third time in four seasons that Allgaier and the No. 7 team have advanced to the Championship 4. Saturday’s win was the Illinois native’s 11th in NXS competition, second at ISM Raceway and first of the 2019 season. Allgaier now has eight wins since joining JR Motorsports in 2016, the most victories by a driver in the team’s history.

Entering the weekend, the team knew they needed to have a strong race and they got off on the right foot by qualifying fifth for the 200-lap event. From the drop of the green flag, Allgaier’s BRANDT Chevy showed speed. When the first caution of the day waved on lap 14, he was running in the fourth position and relayed to the team that the No. 7 Camaro was lacking right-rear security. Opting to stay out, Allgaier restarted in the fourth spot and quickly advanced to second, holding on to the position until the green-and-white checkered flag waved to end the first stage on lap 45.

During the stage-ending caution, the team made a pit stop for four tires, fuel and multiple adjustments after Allgaier reported that the BRANDT Camaro was tight through the center and free on exit. He took the green flag for Stage Two from the fourth position on lap 54 and retook the second spot in a hurry. The second stage went caution free and Allgaier maintained the runner-up spot, claiming nine more stage points when the green-and-white checkered flag waved on lap 90. Under the yellow, Allgaier brought the No. 7 Chevy to pit road for four fresh tires and fuel.

Kicking off the final stage of the race from the second position, Allgaier powered his way to the top spot to lead for the first time of the day on lap 99. He was still running point when a caution came out on lap 116. Allgaier reported that the BRANDT Camaro had better balance in Turns 1 and 2 and was still a little tight through the center of Turns 3 and 4. The team opted to make what would be their final stop of the race for four tires and fuel.

Due to varying pit strategies, Allgaier restarted in the 10th position, the furthest back he had been all day. Up for the challenge to get back to the front, the 33-year-old driver made quick work of the field, finding himself in fourth within five laps. By lap 132, he was up to second and closing in on the leader, ultimately retaking the top spot on lap 135. The remainder of the race went caution free, allowing Allgaier to stretch out his lead during the long green-flag run. Cole Custer started tracking him down in the closing laps, but Allgaier was able to stay out front and cruise on to the victory, earning a spot in the Championship 4.

Allgaier led 85 laps on his way to the 11th win of his NXS career. Custer took the runner-up spot and was followed by Tyler Reddick, with John Hunter Nemechek and JRM driver Zane Smith rounding out the top five.

“I am so proud of everyone on this BRANDT Professional Agriculture team. To have the season we’ve had, to have the speed we’ve had and to not have a win to show for it has been disappointing for us. Coming into this weekend, we had a goal of coming here and winning the race so that we could go compete for the championship and we did it. This was our race and it feels amazing to finally get back to victory lane. Now we get to go have some fun next weekend and hopefully bring the championship home for everybody at JR Motorsports.”