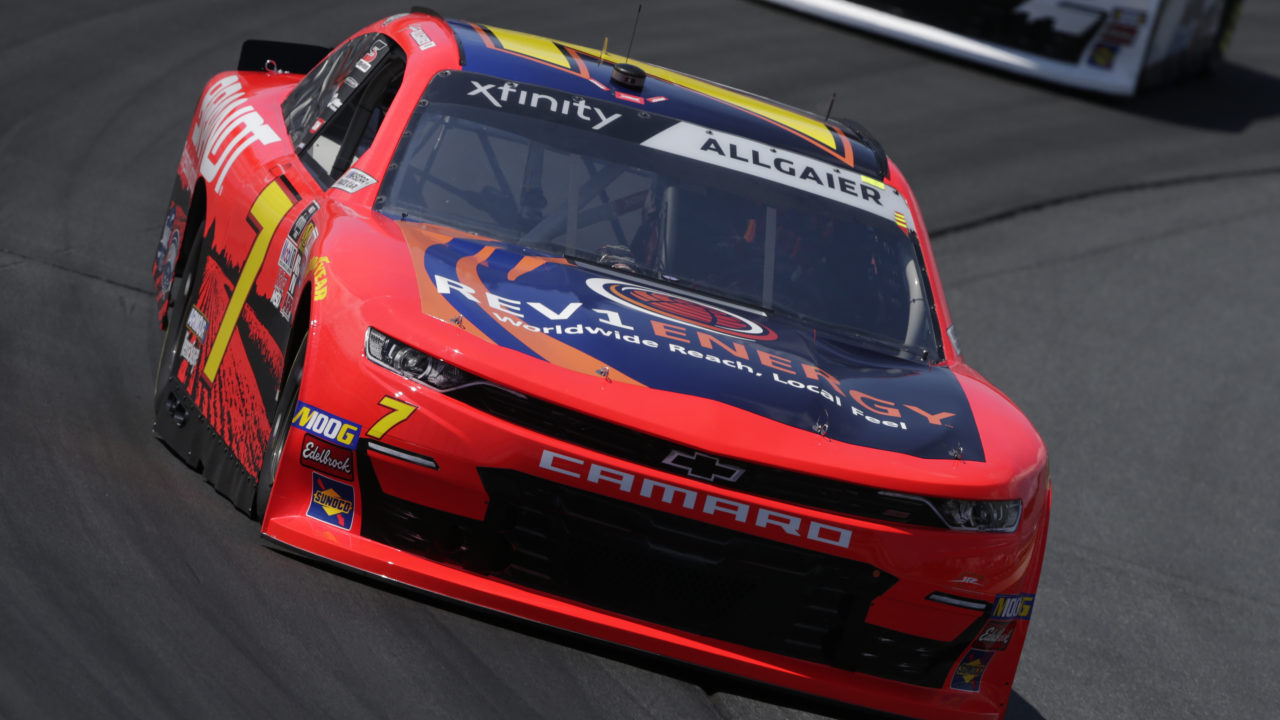 Justin Allgaier and the BRANDT/ Rev1 Energy team powered their way to a third-place finish in Saturday’s NASCAR Xfinity Series race at New Hampshire Motor Speedway. The finish was their eighth top-five effort of the season. Allgaier moved up to fourth in the NXS point standings.

The Illinois native qualified eighth for the 200-lap race and was quick to gain positions from the drop of the green flag. Running in fifth on lap six, he reported to the team that the BRANDT/ Rev1 Energy Camaro was good in, tight center and loose on exit.

He continued his surge forward, moving into the third position on lap 11. When the first caution flag of the race waved on lap 32, Allgaier told the team that the center stayed tight and the exit got a little better. The team opted to come to pit road for four tires, fuel and an air-pressure adjustment. With some teams deciding not to pit, the JR Motorsports driver restarted 10th on lap 37 and was able to advance his position to fifth before the green-and-white checkered flag waved to end the first stage on lap 45.

Staying out under the stage-ending caution, Allgaier lined up in the third position to start the second stage and quickly moved to second. Tyler Reddick tried to take over the spot and a battle ensued between the two, with Cole Custer closing in as well. Custer made it three-wide to take over the second spot, with Allgaier slipping back to fourth on lap 56.

The three drivers continued to battle for much of Stage Two and Allgaier’s Camaro proved to be better on the longer run as he was able to get back by both, moving into second on lap 76. He reported to the team soon after that the BRANDT/ Rev1 Energy Chevy was loose in, tight through the center of the turns and free late exit. Still, he maintained his position on the track, finishing Stage Two in the runner-up spot.

During the caution to end Stage Two, crew chief Jason Burdett called Allgaier in for fresh tires and fuel, along with wedge and air-pressure adjustments. He took the green flag for the final stage on lap 98 in the second position, and soon after, Custer closed in on his bumper. The two dueled for several laps until Custer took over the position on lap 114. Allgaier was still running in the third spot when a caution came out on lap 141 and team took the opportunity to pit for the final time for four tires and fuel.

A fast stop allowed Allgaier to line up second for the restart. With the leader choosing the preferred top line, Allgaier was forced to start on the bottom. He was running in third when another yellow flag waved on lap 154 and once the race was back under way, he slid back to fourth. However, with the remainder of the race going caution-free, Allgaier was able to use his Camaro’s long-run speed to get by Reddick in the closing laps to take the checkered flag in third.

Christopher Bell won the race and was followed by Custer and Allgaier, with Reddick and Paul Menard rounding out the top five.

“Our BRANDT/ Rev1 Energy Camaro was really good on the long run. We needed a little bit of short-run speed to be able to keep up with Christopher (Bell) and Cole (Custer), but it was a solid day. We executed well and had great pit stops. Eddie (D’Hondt, spotter) did a great job getting me in lanes that I needed to be in to really maximize the day. I’m really proud of this team. We needed a day like today.”