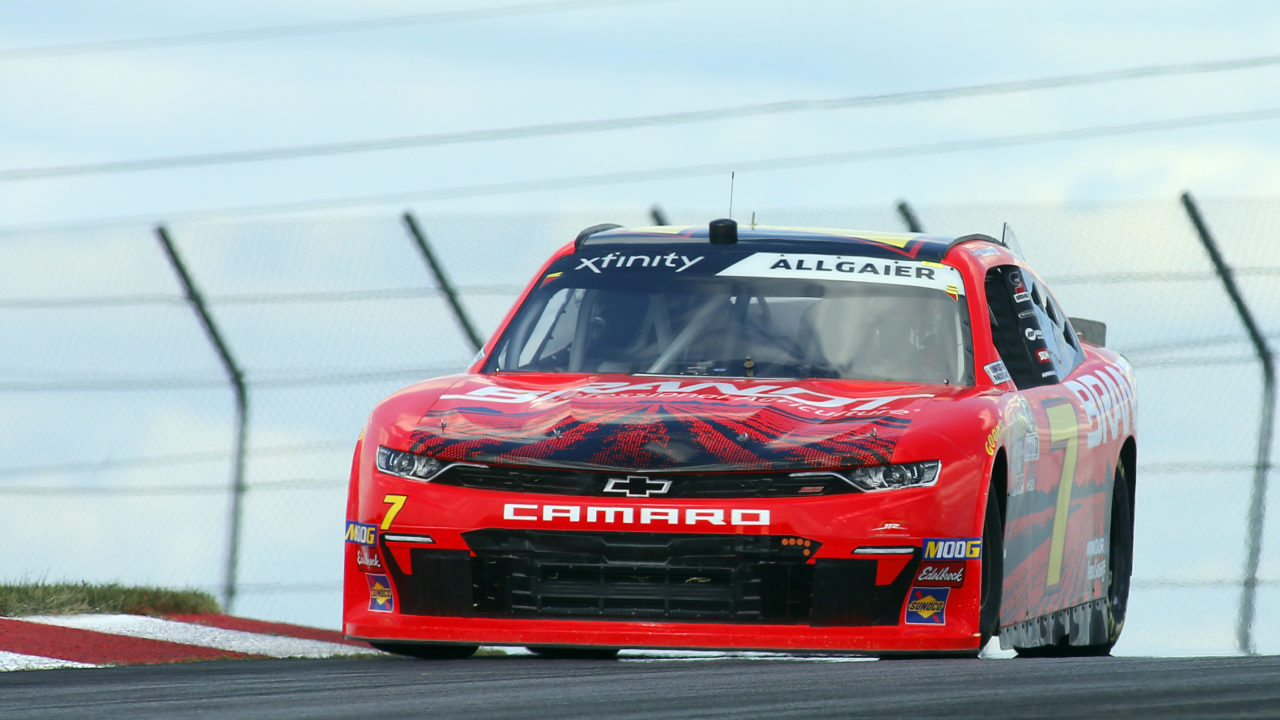 Justin Allgaier’s hopes of repeating his 2018 victory at Mid-Ohio Sports Car Course were riding high at lap 37, but a spin in Turn 2 on the 2.258-mile course put him behind the curve. The Illinois native recovered nicely, however, and drove his BRANDT Professional Agriculture Chevrolet to a sixth-place finish in the B&L Transport 170 for NASCAR Xfinity Series machines on Saturday afternoon. It was his sixth consecutive top-10 finish and 14th of the season.

Allgaier lined up eighth for the initial start and wasted no time moving forward, picking up a position to seventh on the first lap. He stayed there as the 20-lap Stage One ticked by. With three laps remaining in Stage One, crew chief Jason Burdett called his driver to pit road for four tires and fuel, and after a swift stop from His BRANDT Professional Agriculture crew, Allgaier went back out in 20th position. The final two circuits netted an 18th-place finish at the end of the stage.

Staying on track while the rest of the field pitted, Allgaier cycled up to third position for the Stage Two restart, behind leader Austin Cindric and second-place Christopher Bell. All three cars were on a similar strategy. When the green flag waved, Allgaier maintained third place before Jack Hawksworth began to cut into his lead. Hawksworth took third place from Allgaier under braking, which pushed Allgaier back to fourth, where he stayed until the caution flag waved for a car off-course. The ensuing restart was action-packed, as several cars made contact with each other and resulted in a yellow-flag period that lasted until lap 36, four laps shy of the Stage Two conclusion.

On the ensuing restart, Allgaier drove down into Turn 2 on the inside line and spun in fluid left from the previous caution. That put him 22nd for the short run to the green-checkered flag, and his problems were compounded by the pit lane being closed until a lap past the Stage Two conclusion. When he finally was able to come into the pits for four more tires and fuel, he had advanced to 14th position. Burdett had planned to bring Allgaier back down with one lap to go to add a splash of fuel for the run to the finish, but the one-to-go signal came out before that could happen, and he was forced to stay on the track.

Restarting from the outside of the 10th row in 20th, Allgaier put his No. 7 BRANDT Professional Agriculture Chevrolet on blast. He gained five positions in the first lap of green-flag racing and three more over the next two to run 12th. He cracked the top 10 on lap 47 by passing two cars in Turns 4 and 5, and a lap later passed JRM teammate Michael Annett at Turn 7 to sit eighth with 27 laps remaining in the event. He was still eighth seven laps later when the yellow waved again for a two-car crash. Hitting pit road on lap 57 for his last set of tires and fuel to the end, Allgaier exited in 14th position and started the race to the front all over again.

Taking the green flag with 16 laps to go, Allgaier advanced six positions in the first two laps to run eighth again, then passed for seventh a lap later. Stalking sixth-place Chase Briscoe, Allgaier passed him into Turn 4 with 10 to go and held sixth place to the finish.

“There were a lot of different strategies going on today and we had a good one going. We just didn’t have enough. We had good track position in the BRANDT Professional Agriculture Chevrolet and just spun. That really hurt. We didn’t have the raw speed that we needed. We needed to beat them by not making mistakes, and I made a mistake. It’s frustrating. We had held pace all day and did what we needed to do to have a good day, had a good day in the pits. We’ll wait a couple of weeks and go do it again at Road America.”