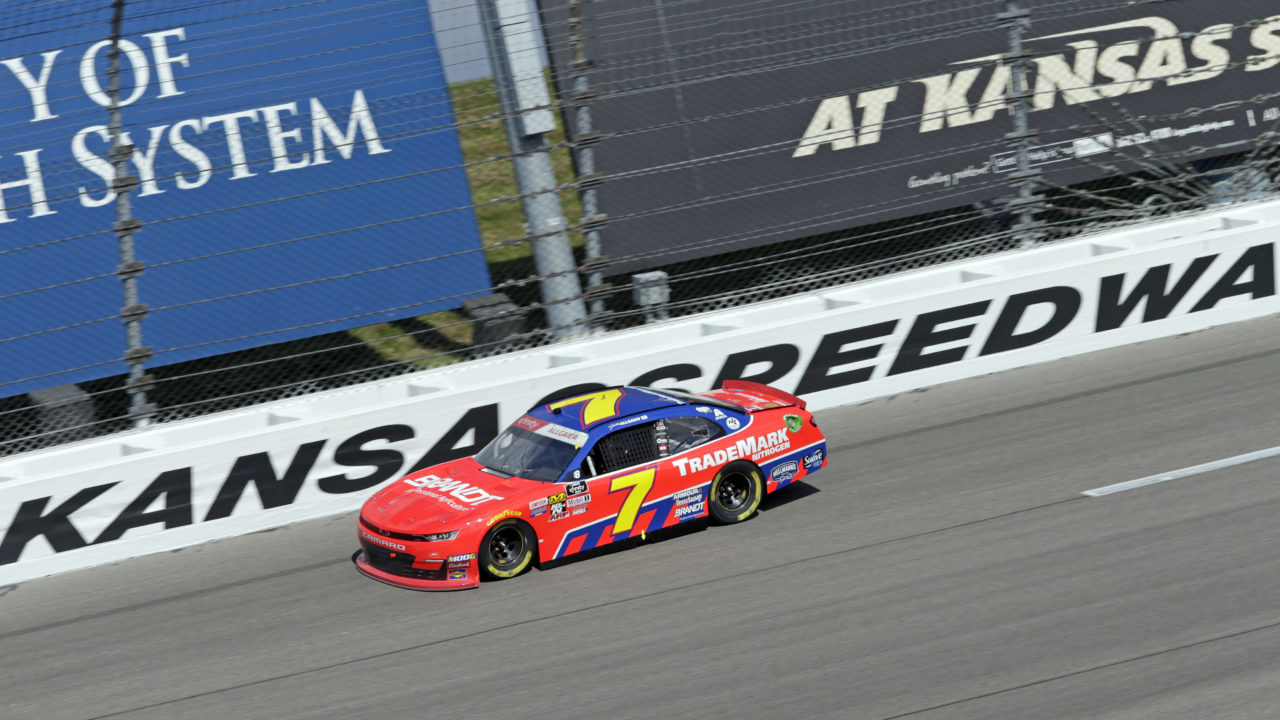 Justin Allgaier continued his streak of top-five finishes on Saturday, placing fifth driving the BRANDT/TradeMark Nitrogen Camaro in the Kansas Lottery 300 at Kansas Speedway. The JR Motorsports driver now has six consecutive top-five efforts, with an average finish of 3.6 during that span. Points earned in each stage during Saturday’s race helped propel Allgaier to fourth in the NASCAR Xfinity Series point standings with two races left before the cutoff for the Championship 4.

Qualifying seventh for the 200-lap race, Allgaier maneuvered his way to fourth on the first lap and continued to run inside the top five until the first caution of the race on lap 4. Under the yellow, he relayed to the team that the No. 7 Camaro had good handling. Restarting in fifth on lap 12, he slipped back to eighth, but steadily worked his way forward, ending Stage One in the fifth position on lap 45. During the stage-ending caution, Allgaier reported to crew chief Jason Burdett that the BRANDT/TradeMark Nitrogen Camaro was edgy on entry and exit and that he need to rotate the center better. The team opted to take four fresh tires and fuel, and make air-pressure and wedge adjustments during their pit stop.

Lining up in the fourth position to start Stage Two, Allgaier battled inside the top five for several laps. He radioed to the team that the No. 7 Chevy was still free on entry and exit. When a caution came out on lap 70, he was running in the sixth position. Once the green flag was back in the air, Allgaier surged forward, racing inside the top five and staying there for the remainder of the stage. He took the green-and-white checkered flag to end Stage Two in the fourth position. Under the caution, Burdett called Allgaier to pit road for four tires, fuel and multiple adjustments to try to improve the handling on the No. 7 Camaro.

Allgaier started the final stage in the fifth position and got extremely loose on lap 98, but was able to save it and continue on. The near spin caused Allgaier to fall back to the 10thposition, but he had advanced to ninth by time another yellow came out on lap 145. The caution gave the team the chance to make additional adjustments and get another set of fresh tires and fuel. He restarted in seventh on lap 152 and it didn’t take him long to work his way to fifth before yet another caution came out on lap 163. Allgaier radioed that his Camaro was a lot better during that run and when he came in for a pit stop, the team decided to take four tires and fuel and no adjustments.

Lining up seventh for the restart, Allgaier was shuffled back to 11th on lap 170, but again he began the climb forward, moving into the eighth position before the yellow flag waved once again on lap 184. He restarted in sixth and raced his way to fourth prior to another quick caution coming out on lap 192. Allgaier lined up in the same spot for the final restart of the race and battled hard for position in the closing laps, taking the checkered flag in the fifth position. The finish was his sixth consecutive top-five effort.

Brandon Jones earned the victory and was followed by Tyler Reddick, with Chase Briscoe, JRM driver Michael Annett and Allgaier rounding out the top five.

“It was a challenging day for our BRANDT/TradeMark Nitrogen team, but coming back and getting a top five out of it was a great thing. The guys worked their tails off in the pits. We struggled with the balance a little bit today, but we were able to fight hard and get a solid finish. It turned out to be a pretty good day points-wise and we’re going to keep after it as we head to Texas and Phoenix. I have confidence in this team that we can make it to Homestead and battle for the championship in a few weeks.”