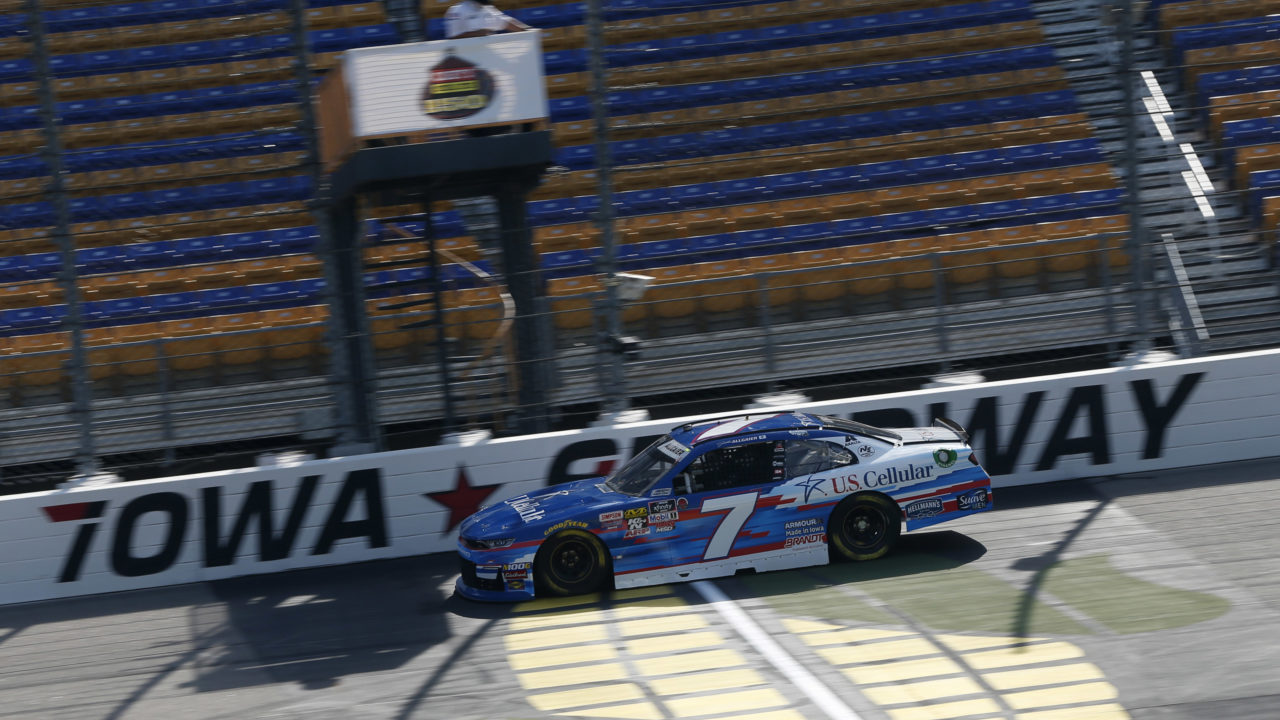 Justin Allgaier drove the U.S. Cellular Camaro to a sixth-place finish in Saturday’s U.S. Cellular 250 at Iowa Speedway. It was the No. 7 team’s 11th top-10 effort of the season and Allgaier’s 12th top 10 in 16 NASCAR Xfinity Series starts at the Iowa short track. The JR Motorsports driver remains fourth in the NXS point standings.

Qualifying fifth for the 250-lap race, Allgaier raced inside the top 10 for the first portion of Stage One. He was running in the fifth position when the first caution flag of the day waved on lap 44. Under the yellow, crew chief Jason Burdett called Allgaier to pit road for four tires, fuel and an air-pressure adjustment to try to help a tight-handling condition in the center of the turns. He restarted seventh on lap 52 and was able to gain two positions to finish Stage One in fifth on lap 60.

Staying out under the stage-ending caution, Allgaier lined up fifth for Stage Two. Back under green, he continued to battle inside the top 10, but reported to the team that the U.S. Cellular Camaro was still tight in the center and free on exit. He fought through the tough-handling condition to end Stage Two in the 10th position. During the caution, Allgaier came to pit road for four tires, fuel and multiple adjustments.

When the green flag dropped for the final stage, Allgaier drove from eighth to fifth in a hurry. He relayed that the adjustments helped, but that he could use a little more. When a caution came out on lap 152, the team took the opportunity to come to pit road, along with several other teams, for their last set of fresh tires, fuel and another round of adjustments. Restarting 12th on lap 158, Allgaier again surged his way forward and was running in the third position when a yellow flag waved on lap 201.

Opting not to pit under the caution, Allgaier restarted third, but lost some positions due to cars being on fresher tires because of varying pit strategies. The Illinois native was in seventh when the last caution of the day came out on lap 219, and the team called him to pit road for a set of scuffed tires from earlier in the race, fuel and an adjustment in hopes of gaining some positions in the closing laps. Lining up 10th for the restart on lap 228, Allgaier was able to work his way up to the sixth position before the checkered flag waved.

Chase Briscoe won the race and was followed by Christopher Bell and John Hunter Nemechek, with Noah Gragson and Tyler Reddick rounding out the top five.

“These guys worked hard all weekend long on our U.S. Cellular Camaro. It looked like we were going to get a nice top-five finish, but at the end there, we were kind of sitting ducks with some of the others having fresher tires. The fastest car doesn’t always win the race, but strategy does. Today our strategy didn’t prevail, but all in all it was still a solid day.”