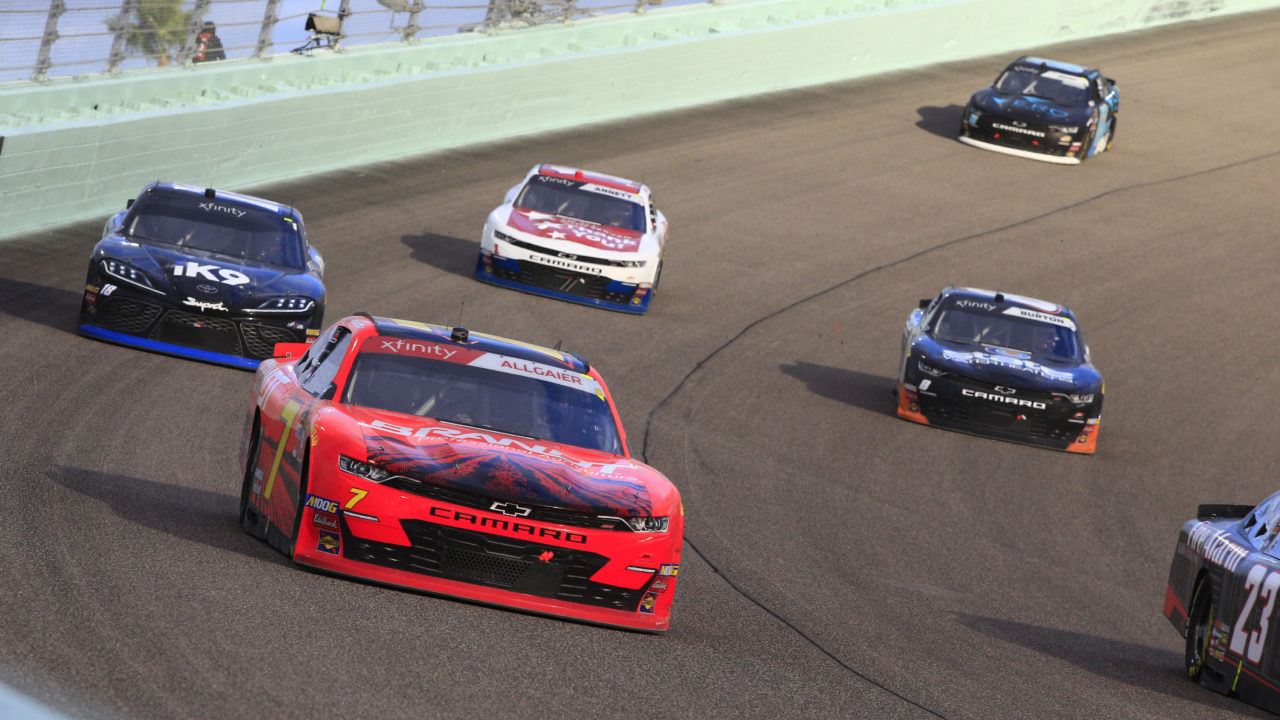 Justin Allgaier and the BRANDT Professional Agriculture team wrapped up the season fourth in the NASCAR Xfinity Series point standings after a hard-fought battle for the championship in the season finale at Homestead-Miami Speedway. Allgaier raced inside the top 10 for much of the 200-lap race, but a cut tire with less than 20 laps to go forced the team to make a green-flag pit stop, relegating them to a 14th-place finish. This was the JR Motorsports driver’s third appearance in the Championship 4 in the last four years.

Allgaier qualified an uncharacteristic 16th for the final race of the season, but from the drop of the green flag he surged forward, finding himself inside the top 10 by lap 12. He reported to the team during Stage One that the BRANDT Camaro was free on entry and exit of the turns and tight through the center. When the third caution of the race came out on lap 33, Allgaier was in the ninth position. The No. 7 team opted to stay out, while other cars on a varying strategy decided to pit. Allgaier restarted fourth, but fresher tires prevailed as he was scored in the 13th position when the green-and-white checkered flag waved to end Stage One on lap 45.

Under the stage-ending caution, crew chief Jason Burdett called Allgaier to pit road for four tires, fuel and adjustments to try to improve the handling on the No. 7 Chevy. He took the green flag for Stage Two inside the top 15 on lap 52 and he made quick work of the field, driving up to the third position by lap 58. Allgaier stayed in that same position for the remainder of the long green-flag run that made up the second stage. During the caution period, Allgaier relayed that the BRANDT Camaro was still free in and free off and tight through the middle of the corners, but was way more manageable. The team decided to make another adjustment during the pit stop for four tires and fuel.

Allgaier lined up fifth for the start of the final stage on lap 97 and was up to fourth before a caution came out just one lap into the stage. Allgaier restarted in the same spot and continued to race inside the top 10, running in sixth when another caution flag waved on lap 123. He reported that he was still free on entry and exit of the turns. Back under green, Allgaier advanced his position to fifth by lap 132.

A long green-flag run ensued and the field needed to make one more round of pit stops before the conclusion of the race. Allgaier came to pit road on lap 160 for four tires, fuel and a little bit of tape on the grille. He was running in the seventh position when a cut right-rear tire after brushing the wall forced Allgaier to pit road with less than 20 laps to go. The 33-year-old driver got back out on the track two laps down in the 19th position and was able to make up one of the laps, racing his way up to 14th before the checkered flag waved.

Allgaier ended the season fourth in the NXS championship standings, with one win (Phoenix II), 16 top fives and 24 top 10s.

“Tonight wasn’t our night. We wanted to go for a championship. We felt like we had the opportunity to do that and it just didn’t work out in our favor. I’m still so proud of Jason Burdett (crew chief) and everybody on this BRANDT Professional Agriculture team and everybody back at the shop. They worked their tails off all year and we put together a great season. Now we’ll go back home and get ready to make another run for the title next year.”