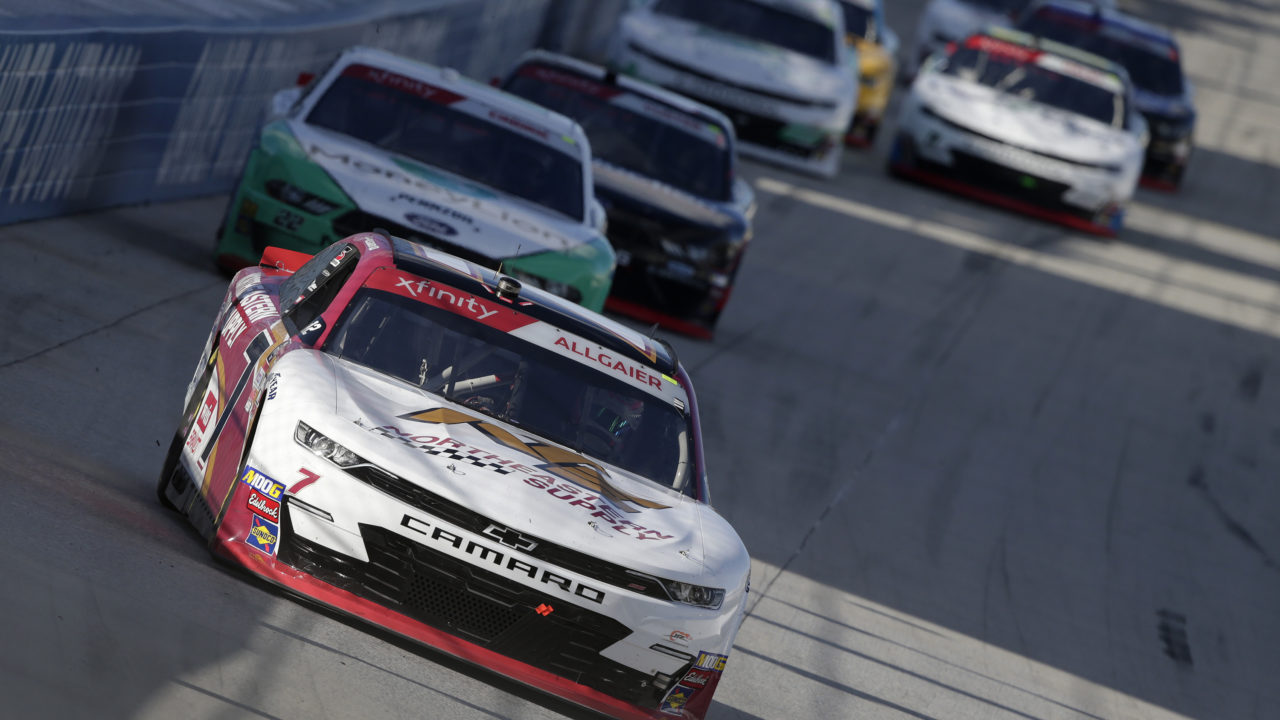 Justin Allgaier swept the first two stages of Saturday’s race at Dover International Speedway and led 67 laps, bringing the Northeastern Supply Chevy home with a second-place finish. The runner-up effort was Allgaier’s fifth consecutive top-five finish and locked him into the Round of 8 for the NASCAR Xfinity Series Playoffs. He currently sits fifth in the standings, just three points below the cutoff line with three races to go before the playoff field is narrowed down to the Championship 4.

The Illinois native qualified eighth for the 200-lap race. Once the green flag dropped, it didn’t take long for trouble to brew on the track as a multi-car incident brought out a caution on lap 1. Allgaier was able to escape the carnage and continue on to restart in the fourth position on lap 6. Back under green, the JR Motorsports driver surged forward in a hurry, moving into the second position by the next lap. He was in that same spot when another caution flag came out on lap 21.

Under the yellow, Allgaier relayed to crew chief Jason Burdett that the Northeastern Supply Camaro was losing corner exit grip. Opting to stay out, Allgaier restarted in the second position and took over the lead on lap 27. He continued to pace the field until the green-and-white checkered flag waved to end the first stage. With the stage win, he gained a coveted playoff point.

During the stage-ending caution, Allgaier came to pit road for four tires, fuel and multiple adjustments. A fast stop by the No. 7 pit crew allowed Allgaier to win the battle off of pit road. Taking the green flag in the top position, Allgaier held on to the lead for the entirety of the caution-free second stage, allowing him to rack up another playoff point. Under the caution to end Stage Two, the team called Allgaier to pit road for four tires, fuel and more adjustments.

The driver of the Northeastern Supply Camaro started the final stage from the third position on lap 98 and quickly maneuvered his way to second. He radioed to the team that the last adjustment made the No. 7 Camaro too tight through the center of the turns. As a long green-flag run ensued, the team began getting their game plan together for the next stop.

Allgaier came to pit road for a scheduled green-flag pit stop near lap 165 for four tires, fuel and an air-pressure adjustment. Pit stops continued to cycle through for the field until an ill-time caution came out with only three lead-lap cars left to pit. Allgaier was caught as the first car lap down in the fourth position and was given the free pass. He restarted in fourth on lap 186 and was back up to second before yet another caution flag waved on lap 188. Allgaier lined up in second beside Cole Custer for the restart with less than 10 laps to go. He fought hard for the lead but wasn’t able to get around Custer in the closing laps, ultimately finishing the race in the runner-up spot and locking himself into the Round of 8.

Custer won the race and was followed by Allgaier, with Austin Cindric, Justin Haley and Chase Briscoe rounding out the top five.

“Our Northeastern Supply Camaro was really good today. We made good changes throughout the race and got track position and we were able to maximize points. I feel like if there hadn’t been that caution there during green-flag pit stops we would have been in really good position to get the win. That’s a little disappointing, but it was still a really solid day and to move on to the next round of the playoffs is a big deal.”