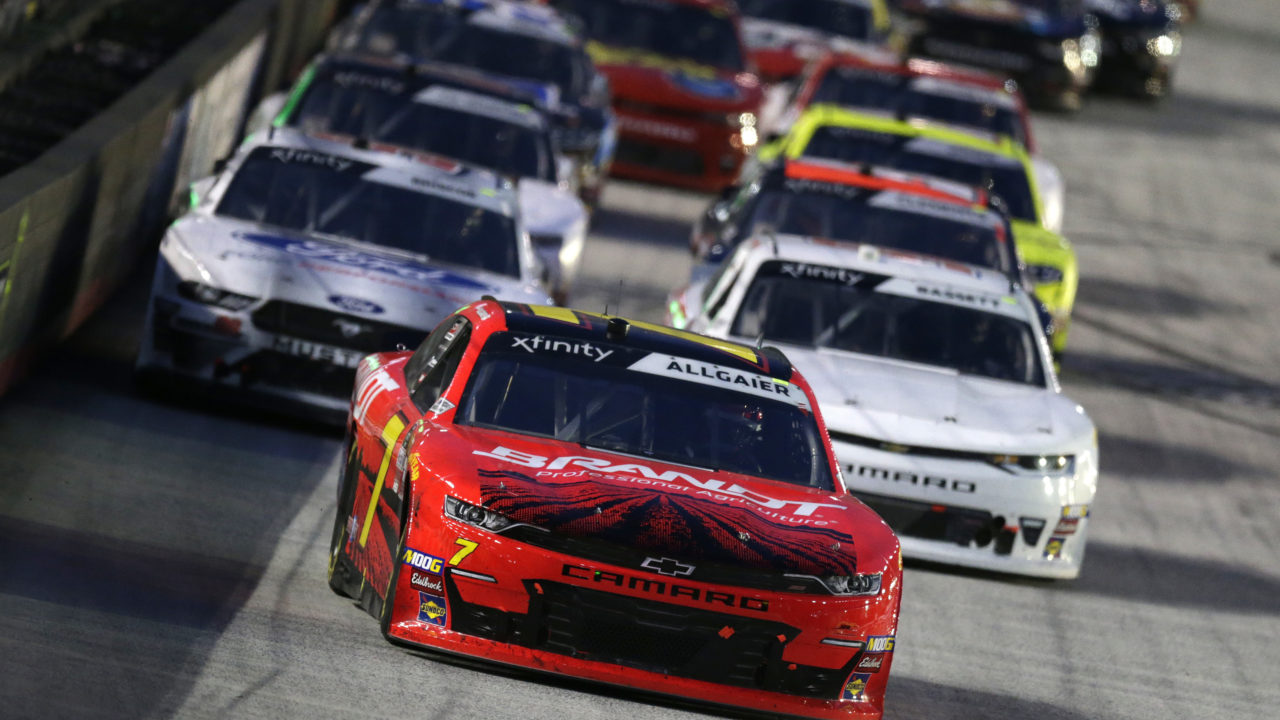 Justin Allgaier was leading in the final laps of the Food City 300 at Bristol Motor Speedway when the BRANDT Professional Agriculture Chevy cut a tire, forcing Allgaier to come to pit road. The JR Motorsports driver ended the day with an eighth-place finish after pacing the field for a total of 131 laps.

Qualifying third for the 300-lap race, Allgaier battled inside the top five for much of Stage One. By lap 60, he worked his way to the lead and was still running point when a caution came out on lap 72. Staying out under the caution, Allgaier retained the lead for the restart. In the closing laps of the stage, a battle ensued between Allgaier and the No. 2 of Tyler Reddick. The driver of the No. 2 got loose and spun below Allgaier, bringing out the caution that ultimately ended Stage One. Allgaier was scored in second place at the time of the yellow flag.

Under the stage-ending caution, crew chief Jason Burdett called Allgaier to pit road for four tires, fuel and an adjustment. He took the green flag from the 13th position on lap 92 and was quick to move back into the top five. When a caution came out on lap 120, Allgaier was in the fourth position. Restarting in that same spot, he maneuvered his way to second on lap 124 and remained there until Reddick worked his way by in the closing laps of the second stage. Allgaier ended Stage Two in the third spot and reported to the team that the BRANDT Camaro was way freer that run. The team called him to pit road for four tires, fuel and a round of adjustments.

Starting the final stage in the third spot, Allgaier worked his way to the lead in a hurry and was still up front when the caution came out on lap 222. Allgaier and the team opted to stay out while the rest of the lead-lap cars headed to pit road. On the lap 226 restart, Allgaier maintained the lead, putting some distance between himself and the field. The last caution of the night came out on lap 281, setting up one final restart on lap 286. Allgaier again held the lead, but cut a tire and was forced to come to pit road under green on lap 290. He got back out on track and still ended the day with a top-10 finish, taking the checkered flag in the eighth position.

Reddick would go on to win the race and was followed by Chase Briscoe, with John Hunter Nemechek, Jeremy Clements and Austin Cindric rounding out the top five.

“I don’t know how to process this. This is the story of our year. This BRANDT Professional Agriculture team has done a great job. We had a great car tonight. Typical Bristol, I mean you come out here and have a great car. I’m not sure if could have beat the No. 18 apples-to-apples, but when he fell out, especially at the end there I thought we had the best car. I don’t know what else to do, man. It’s frustrating. These guys deserve a win. Just the tire went down and there’s nothing you can do about it, so we’ll move on.”