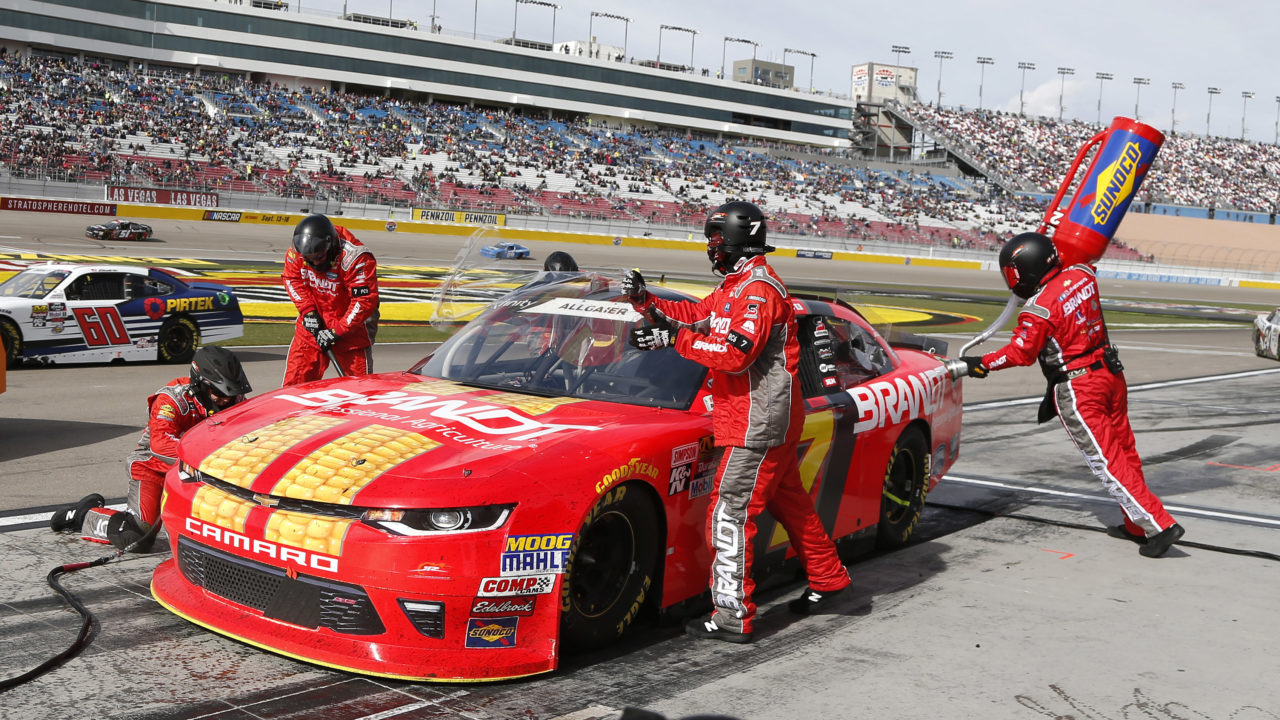 Justin Allgaier and the BRANDT Professional Agriculture team earned a third-place finish in Saturday’s Boyd Gaming 300 at Las Vegas Motor Speedway after leading 12 laps and finishing inside the top 10 each stage. Allgaier now sits fourth in the NASCAR Xfinity Series point standings. The finish was his seventh top-10 effort in eight NXS starts at the 1.5-mile track.

The Illinois native qualified 12th for the 200-lap event and wasted no time once the green flag dropped, working his way inside the top 10 and remaining there for the duration of Stage One. He took the green-and-white checkered flag in the 10th position. Under the stage-ending caution, Allgaier radioed to the team that he had nothing to lean on. Crew chief Jason Burdett made the call for a pit stop for four tires, fuel and a track-bar adjustment, as well as air pressure adjustments.

Allgaier started Stage Two in the sixth position on lap 53 and powered his way to third by lap 68. The driver of the No. 7 Chevrolet liked the previous adjustments made to the car, but relayed that the Camaro was free in and tight in the center up top. He was able to hold on to the third position to finish the stage. The BRANDT team gave him four fresh tires and fuel under the yellow along with an air pressure adjustment.

When the green flag dropped for the final stage on lap 99, Allgaier was in the eighth spot. The outside line got a bad restart, but once everyone settled in, the 31-year-old driver was able to start picking off positions. He was up to fourth by lap 112 and radioed that he was good this stage, but was just a little tight through the center when the sun was out. The caution came out on lap 134 and the team made a pit stop for four tires and fuel. A quick stop allowed Allgaier to gain a spot on pit road and he was able to restart in the third position on lap 139. Just one lap later he took the lead and paced the field for 12 laps before the No. 42 of Kyle Larson made the pass to take over the top spot.

Allgaier was running in third on lap 160 when he reported that he couldn’t carry the speed he wanted to through the center of Turns 3 and 4. The JR Motorsports driver was racing in the fifth position when a caution came out with 15 laps to go. The field hit pit road and the team opted for four tires and fuel. He raced his way up to third once the race was back under way before another quick caution flag waved. Allgaier was able to get a good restart with seven laps remaining and hold on to the third spot at the finish of the race.

Larson won the 300-mile NXS race and was followed by Christopher Bell and Allgaier, with Ryan Blaney and Elliott Sadler rounding out the top five.

“This BRANDT Professional Agriculture Camaro SS was really good all day. We struggled for the short-run speed that we were looking for when we got here this weekend and the guys went to work and did a great job. I’m really proud of this No. 7 team. We had a strong showing today and I’m looking forward to what that holds for the next couple of weeks.”