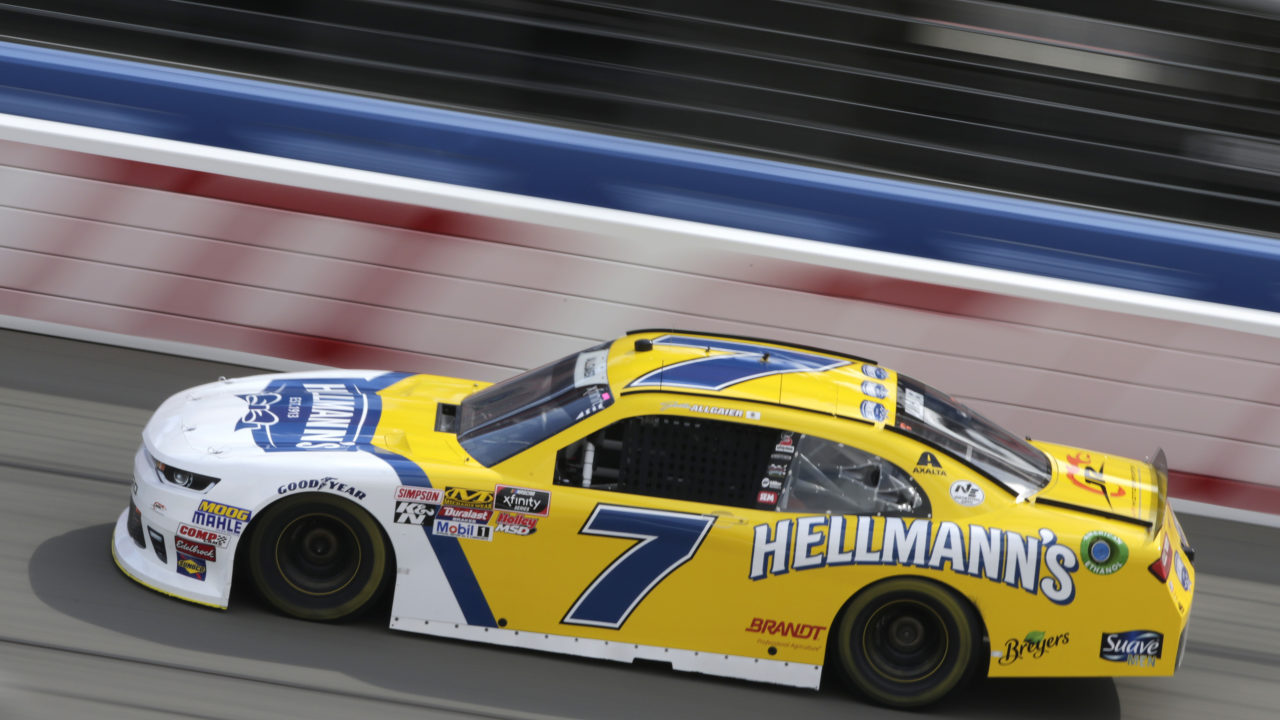 Justin Allgaier and the No. 7 Hellmann’s team wrapped up a successful West Coast swing on Saturday at Auto Club Speedway, posting their third straight top-three finish. Allgaier held off teammate Elliott Sadler in the closing laps of the Rosanne 300 to earn his second runner-up finish in as many weeks. The 31-year-old driver remains third in the NASCAR Xfinity Series point standings, just five markers behind the leader.

Allgaier rolled off sixth for the 150-lap race and moved up to fifth within the first lap. Early in the run he relayed to crew chief Jason Burdett that the No. 7 Chevy was tight in the center of the turns and pretty free on exit. Showing consistent speed on the long run, Allgaier worked his way up to the second spot on lap 30 after making the pass on the No. 00 of Cole Custer. Just a couple laps later the caution flag waved and NASCAR opted to end the stage under yellow-flag conditions on lap 35, with Allgaier earning nine stage points for his second-place finish. Under the yellow, the team called Allgaier to pit road for four tires, fuel and a wedge adjustment.

When the green flag dropped for Stage Two on lap 41, Allgaier was in the second position. Just three laps later, he relayed to the team that the Hellmann’s Chevy was still tight through the center of the corners and was lacking side bite on exit. Allgaier was running in the fifth position when the caution came out just one lap shy of the stage-end. Under the yellow, the Illinois native reported that he needed help on corner exit. The team made a pit stop once the stage concluded for four tires, fuel, and track-bar and air-pressure adjustments.

The Hellmann’s Camaro started the final stage in sixth on lap 77 and was up to fourth on lap 85. Allgaier radioed shortly after that the No. 7 was better on corner exit after the adjustments. He was running in third when the caution came out on lap 99 after the No. 20 spun. The team called Allgaier in under the yellow for four tires and fuel. He fired off on the restart in third on lap 103 and just one lap later the caution came out once again. The team opted to stay out and remain in the third spot for the restart. Once the green flag was back in the air, Allgaier got a good start and battled three-wide for the race lead. He was in the second spot when yet another caution flag waved. The team called Allgaier to pit road for four tires and fuel.

The JRM driver restarted in fifth on lap 115 after some cars opted to stay out, including No. 22 of Joey Logano, who was leading the race. With fresh tires, Allgaier drove from fifth to second within one lap. He was closing in on Logano when the yellow flag waved on lap 122. Allgaier stayed out and assumed the race lead after Logano pitted. Choosing the outside line for the lap-125 restart, Allgaier battled with Sadler for the top spot. Sadler took the lead, but Logano was able to surpass them both with fresher tires. With 15 laps to go, the driver of the No. 7 worked his way passed Sadler to get back to the second position. The caution flag came out with just 12 remaining and Allgaier came to pit road for a final stop for four tires and fuel. He took the green flag in seventh with eight laps to go and was all the way back up to second within one lap. He was able to hold off Sadler in the closing laps to take the checkered flag in the runner-up spot.

Logano ultimately claimed the victory ahead of Allgaier and Sadler, with Austin Dillon and Daniel Hemric rounding out the top five.

“We worked really hard today. We felt like yesterday in practice we had a really strong Hellmann’s Chevy and the conditions were just a little bit different today, so we had to work on it some. Jason Burdett (crew chief) made a great call to pit there towards the end and put tires on and catch the No. 22 off sequence. We were kind of hoping it would take him a bit longer to get back up towards the front, but all-in-all it was a solid day. We had a rough pit stop on the last stop, but the guys were lights out on pit road all day and honestly it put us in a great position to get up the inside and be able to make some spots on that last restart. The No. 22 was definitely the class of the field today. Our West Coast swing has been great. I wish we had a win, but any time you’re up towards the front like that it’s a good day.”