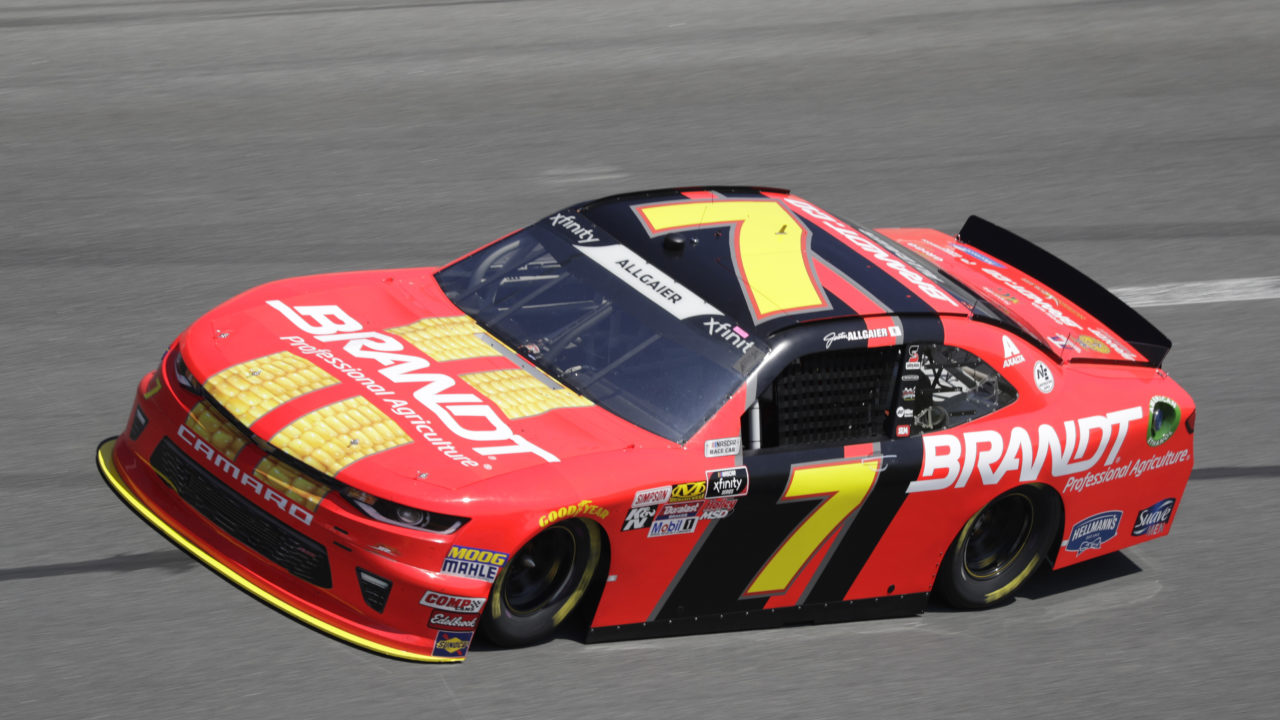 Justin Allgaier and the BRANDT Professional Agriculture team were in the hunt for the victory in Saturday’s Powershares QQQ 300 at Daytona International Speedway when a late-race wreck ruined their chances, relegating them to a 31st-place finish in the season opener.

The 31-year-old driver started the race in the fifth position and showed the power of his BRANDT Chevy early, staying within the main draft towards the front to finish Stage One in third on lap 30. Under the stage-ending caution, Allgaier relayed to the team that the No. 7 Camaro was tight off of Turn 4. Crew chief Jason Burdett called the driver down pit road and the crew gave him two right-side tires and fuel.

He took the green for Stage Two in third and was shuffled back in the draft early to just outside the top 10. Working his spotter to try to utilize different lanes in the draft to advance forward, he was able to end the second stage in 10th. During the run he radioed that the BRANDT Chevy had continued to get tight, especially off of Turn 4. The team opted to make a pit stop for four fresh tires, fuel and a wedge adjustment.

When the field went back to green for the final stage on lap 67, Allgaier found himself in the 11th spot. He was back up to fourth when the yellow flag waved on lap 83. The Illinois native told his team that the last adjustment freed him up on entry, but didn’t help on exit. In an effort to help with the handling, the team called him in for another wedge adjustment and fuel. He restarted in 10th on lap 86 and maneuvered his way back up towards the front, surviving multiple wrecks. On a restart with five laps to go, Allgaier was running in the seventh position and had worked his way up to the second spot when another caution came out, sending the race into overtime.

Allgaier earned himself a front-row spot for the overtime restart and had a good run going, but the No. 98 of Aric Almirola shuffled him to the outside line. Shortly after, chaos ensued ahead of him and the No. 7 Chevrolet was collected in a wreck. The team tried to make repairs, but the heavy damage sustained left Allgaier unable to finish the race, resulting in a 31st-place finish.

“The guys brought a really good BRANDT Professional Agriculture Chevy and I thought we had a good shot at getting the victory today. We had put ourselves in good position there towards the end, but then we got caught up in that wreck and our day was done. I hate it for this entire team because of all the hard work they put in all weekend long and to get so close to coming home with a clean race car. Congrats to Tyler (Reddick) and the entire No. 9 team. It was awesome to see one of my teammates get to Victory Lane. He and Elliott (Sadler) put on quite a show there at the end. I just wish we could have been in the mix there along with them.”