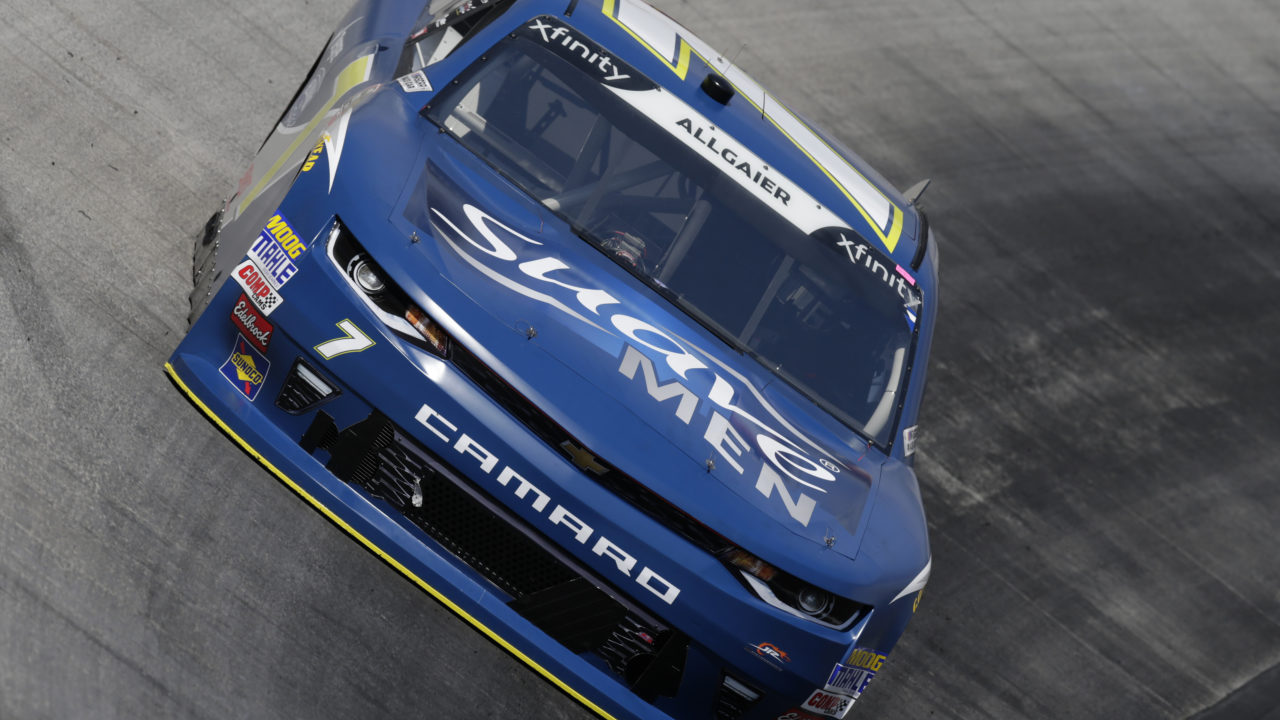 Justin Allgaier and the Suave Men team survived an eventful Saturday afternoon at Bristol Motor Speedway, powering to a second-place finish in the Fitzgerald Glider Kits 300. The Illinois native’s third runner-up finish of the season qualified him for next weekend’s second round of the NASCAR Xfinity Series Dash 4 Cash. Leading 47 laps and earning points in each stage, the 31-year-old driver moved up to fourth in the NXS point standings, 21 markers outside of the lead.

Allgaier qualified in the second position for the 300-lap event and took the lead on lap 1, remaining there until the yellow flag waved for a lap-45 competition caution. He relayed to the team that he was tight through the center of the turns, but overall the No. 7 Chevy was really good. Crew chief Jason Burdett called Allgaier down pit road for four tires and fuel. Restarting on the inside line in third on lap 55, Allgaier slid back to fifth as the top line had a better run. He was battling for position just a few laps later when he was involved in a multicar incident that brought out the caution. Under the yellow, the team changed two-right side tires and made sure there was no significant damage to the Suave Men Chevy. Restarting in 17th on lap 66, Allgaier worked his way back up to 10th before the green-and-white checkered flag waved for the end of Stage One on lap 85.

Under the stage-ending caution, Allgaier relayed that his Chevy was still tight through the center of the turns. The team opted to stay out and Allgaier took the green for Stage Two on lap 99 in the second position. He made contact with another car early in the run that caused him to get loose and spin, bringing out the caution after making slight contact with the inside retaining wall. He brought the No. 7 Chevy to pit road for four tires and restarted just outside the top 20 on lap 110. He radioed early in the run that he was down on the splitter, but was still able to pick up positions. By the time the next caution came out on lap 142 for a multi-car incident, Allgaier had worked his way back up to ninth. Once pit road opened, Burdett called the JR Motorsports driver in so that they could work on the splitter. He took the green flag on lap 150 in 14th and made quick work of the field, advancing to third by the end of Stage Two on lap 170.

The team called Allgaier to pit road under the stage-ending caution for four tires and fuel. Starting the final stage in seventh on lap 178, Allgaier lost a few positions before another quick caution came out. He restarted in 10th on lap 194 and cracked the top five on lap 225, surpassing the No. 00 of Cole Custer. Allgaier was up to third when a caution came out on lap 284. The lead-lap cars came to pit road, with the No. 7 team opting for four fresh tires. The race came down to a 10-lap shootout, with Allgaier restarting in the third position and advancing to second before the checkered flag waved.

“We had such a fast Suave Men Chevy today and this team worked hard all weekend long. We came up just short of the victory, but to finish second after the adversity we faced today, and to qualify for the Xfinity Dash 4 Cash at Richmond, I’ll take it. Hats off to all the guys back at the shop that work on these cars. We’ve been so strong this year and I know a win is coming. It’d be awesome to visit Victory Lane next weekend and take home that $100, 000 Dash 4 Cash prize.”