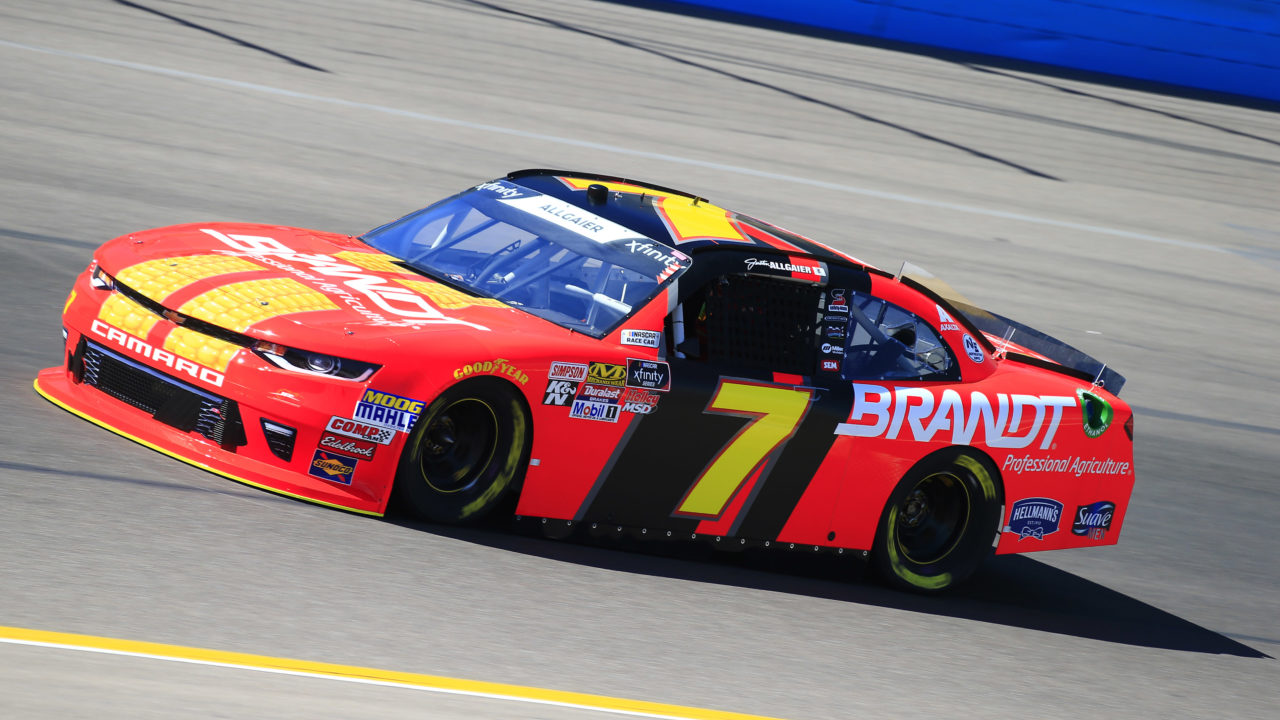 MOORESVILLE, N.C. (March 28, 2018) – Another NASCAR Xfinity Series season means more changes to deal with to start the year. Crew chief Jason Burdett, who leads the No. 7 BRANDT Professional Agriculture team for JR Motorsports is very familiar with that.

Burdett and driver Justin Allgaier have been in the running for the last two NXS championships, taking their shot at Homestead-Miami Speedway each season in an attempt to bring a title home to Mooresville, and twice they’ve been close to doing it. Five races into the 2018 season, all the signs are there for a third straight opportunity.

Allgaier has been fast and steady, and has adapted to yet more rule changes, sitting third in the point standings after a West Coast Swing that saw an average finish of 2.3. Of course, JRM teammates Elliott Sadler and Tyler Reddick are the only drivers ahead of Allgaier in the standings, and the gap is five points from first to third.

According to Burdett, there’s going to be improvement in the offing once the schedule gets somewhat close to normal.

OFF TO A GOOD START: Burdett noted the fact that other than a late-race crash at Daytona, the start of the season has been pretty good for his team.

“Truthfully, I think we started the year at Daytona with good speed and a good car,” he said. “Justin did a great job and we got tangled up in a wreck. There’s nothing you can do about that. Heck, we were second at the end of the actual race and we ended up wrecked.

“Since Daytona, we’ve been at tracks that are historically good for us and some that are historically not so good for us. We ended up sixth at Atlanta, which was a great day for what we’ve been in the past there. That was a positive momentum builder for the start of the year. At Las Vegas, we’ve historically been good there and we were again with a third. Phoenix is always a good track for us and we finished second there. Auto Club is kind of like Atlanta, where we struggle for speed, so to come out of there having good speed all day, competitive speed all day, led some laps...we didn’t have anything for the 22, but who did? The start of the year has been very good.”

Being a crew chief, there was of course a caveat to that praise.

BODIES OF WORK: The flange-fit body has been a topic of discussion ever since NASCAR mandated its use for the 2018 season. Burdett thinks JRM in general and his team in particular have made a good start in adjusting to it so far.

“In the end, the flange-fit body part of it has equalized the field a little, maybe,” he said. “There’s only so much you can do to them. That’s helped us in the fact that maybe we were off a little in the past, with the aero stuff, so it’s maybe brought all of us a little closer together and gotten us faster. I don’t know that we really got faster or whether the field got closer together. Maybe some of the things that we were doing are good.”

That starts in the fab shop at JRM, he added.

“The speed that we’ve shown early on is just a testament to the fact that the guys here building the cars have done a good job. There are still areas that we need to get better in, and we can get better in them. That’s really it; everyone has done a good job of putting the whole package together and getting the season rolling and off on a good foot. From here, it’s just tweaking what we have and trying to get the most out of it for the middle part of the year and going into the last 10 races of the year, when you really have to be on go.”

PEOPLE POWER: Burdett said his team has taken well to the new crew roster program, but like anything else, it’s a work in progress.

“Every rule change you have, there’s a certain amount of time it takes everybody to adjust,” he said. “In the end it’ll be OK, we’ll get through it. It’s just one less person and you have less time to work on the car. Once we get back to our normal deal racing on our normal tracks—Bristol, Richmond, Talladega, Dover, Charlotte—you just kind of get into a swing where it’s all going to start flowing and making a little bit more sense. Everybody then will know their job, per se, and it will all kind of come together.”

That’s an institutional NXS thing, according to Burdett.

“The NXS has always done it with less people than the Cup Series, and it’s kind of like, ‘do you need 15 guys? 10 guys? Or do you really just need three?’ It’s a balance. However many people you have is what you do. That’s kind of how it’s always been. The roster thing has been kind of a headache to get started, but as we get going it will all work out.”

One aspect of the new crew roster plan is communication...as in there’s less people involved, so more communication is required. Luckily, veteran car chief Billy Wilburn is exactly the kind of guy that thrives in this environment.

“The easiest way to do anything is talk to one person, right?,” Burdett queried. “Billy Wilburn has been the car chief all along, so you have to funnel everything through one person. If you get too many people doing too many different things, this guy doesn’t know what that guy is doing. That’s when you end up with trouble. You try to funnel everything through that one guy.

“Instead of three people and the car chief working on the car, now you have two and the car chief and an engine guy as well and the engineers are helping more. I think it’s more critical now to have that line of communication as streamlined as possible because you can’t miss anything. Guys have a lot more to do because there’s one less person, so it has to be more streamlined and more efficient somewhere. You can’t get it spread out. It’s got to be pretty planned out as far as how you utilize your time.”

PIT PATTER: There’s one less pit crewman on each stop, too, and that’s taking a little time to get right. Burdett pointed out that as much as the road crew has to adapt, so too do the pit crews. Burdett has his own adjustments to make on, well, making adjustments.

“The pit stops are for sure a challenge,” he said. “As this goes along with the roster change for the road crew, the roster change on the pit crew...those guys are still a work in progress in how it all works. As the season moves on, they will adjust the pit stops. Hendrick Motorsports handles all the pit stop stuff, and probably by the middle of the year you’ll feel more comfortable making adjustments on the car and not losing huge amounts of time on pit road.

“Right now, if you make an adjustment it can be a two- or three-second disadvantage on your stop, sometimes. Sometimes it’s not. We’ve had stops with adjustments that go really well, then you have one that’s really bad. That goes the same on stops with no adjustments.”

There are equipment concerns as well, and Burdett is confident that the evolution will gain steam as the season progresses. “It’s going to evolve,” he mused. “The (pit) guns are going to have to evolve at some point, because they’ve had a lot of issues. At Martinsville (in the Cup race), they had one break in half. It will get better, the little details will work out. It’ll never be what it was, but it will get better and better.”

HITTING THE MARKS: As for a grade for his team’s performance, Burdett is a little like a college professor teaching a 400-level class. He’s taking the long view, because the short view has a few holes in it.

“I feel like as a team we’ve done a good job,” he said of his group. “You say now you’re at a B-plus, and by the end of the year you’d like to be an A-plus, right? I feel like right now a B-plus would be good.”

More time is needed to properly evaluate all that has been jam-packed into just five races.

“There’s obviously room for improvement through all this as we adjust to the pit crew changes, the roster changes, the bodies, all the different things...the new tech procedures,” Burdett mused. “We’ve done a good job, but there are a lot of things we can do to get better. As far as myself, I don’t know how you really rate yourself. As a group we’ve all done pretty well.”

He hit the other teams in the building as well, as sort of an overview.

“As an organization we’ve done good things at different times,” he said. “I think we’ve all had good speed at different points of the race. The 9 has been fast, the 1 has been the same solid they always are and we’ve had a better start to the year than we’ve had the last couple of years, and that’s a positive for us because we’re not so far behind. Last year we wrecked the first two races, and spent all year trying to get back close. The 5 has had solid runs and had things happen, but solid runs.

“As a group we’ve done well. If we can keep trending upward we’ll be in good shape.”